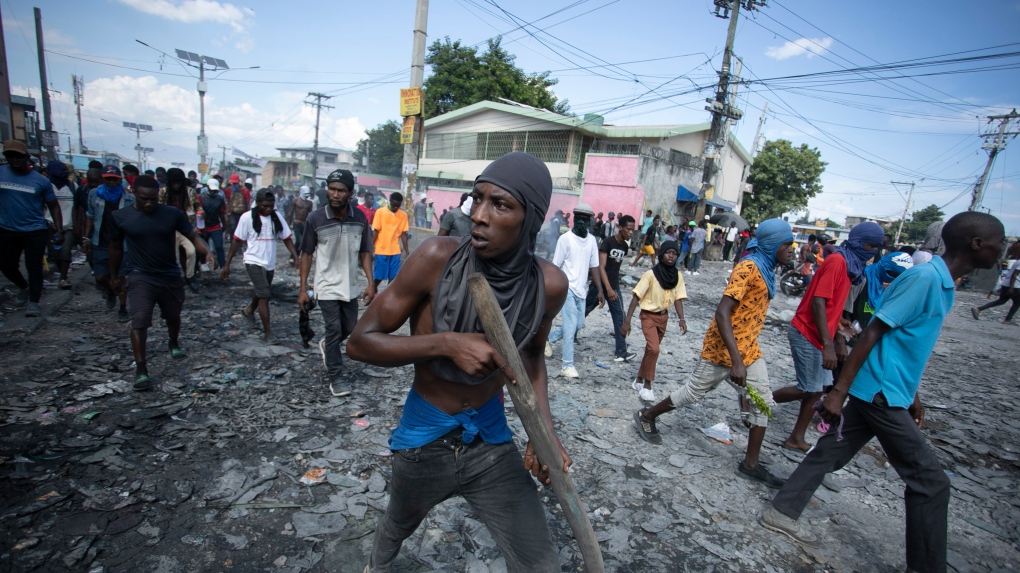 A protester carries a piece of wood simulating a weapon during a protest demanding the resignation of Prime Minister Ariel Henry in the Petion-Ville area of Port-au-Prince, Haiti, on Oct. 3, 2022. (AP Photo/Odelyn Joseph)
WASHINGTON -

Canada's government said it would freeze any local assets of three high-profile Haitian businessmen accused of supporting the country's armed gangs, the latest measure targeting those linked to the Caribbean nation's criminal groups.

"Canada has reason to believe these individuals are using their status as high-profile members of the economic elite in Haiti to protect and enable the illegal activities of armed criminal gangs, including through money laundering and other acts of corruption," the foreign ministry statement said.

GB Group and the office of Haitian Prime Minister Ariel Henry did not immediately respond to requests for comment. Reuters was unable to obtain comment from Deeb or Abdallah.

The sanctions add to others already imposed by Ottawa, including on three Haitian politicians in November, and "are intended to put pressure on those responsible for the ongoing violence and instability in Haiti."

The United States on Friday imposed sanctions on a current and a former Haitian senator, accusing the two politicians of engaging in drug trafficking activities.

Haitian gangs in September created a humanitarian crisis by blocking the entrance to a fuel terminal, leading to shortages of gasoline and diesel that halted most economic activity just as the country reported a renewed outbreak of cholera.

Policymakers in the United States and Canada have this year been increasingly vocal in discussing alleged links between gangs and economic elites.

Two U.S. lawmakers in September said the United States should sanction Haitian gang leaders and the "warlords" who finance them.

Reporting by Doina Chiacu and Brian Ellsworth in Washington, editing by Deepa Babington

Biden says he gave the order for Chinese balloon shootdown

President Joe Biden said on Saturday that he ordered U.S. officials to shoot down the suspected Chinese spy balloon earlier this week and that national security leaders decided the best time for the operation was when it got over water.

How to stay safe in extreme cold: Recognizing the signs and symptoms of frostbite, hypothermia

Marit Stiles has been confirmed as the new leader of the Ontario NDP after a majority of party members voted in favour of the lone candidate.

Eyes on the sky as Chinese balloon shot down over Atlantic

Eyes were locked on the skies Saturday as a suspected Chinese spy balloon passed over the U.S. Eastern Seaboard -- where local authorities warned civilians against taking potshots with rifles -- before it was shot down when it drifted over the Atlantic Ocean.

Dozens of Russian and Ukrainian prisoners of war have returned home following a prisoner swap, officials on both sides said Saturday.