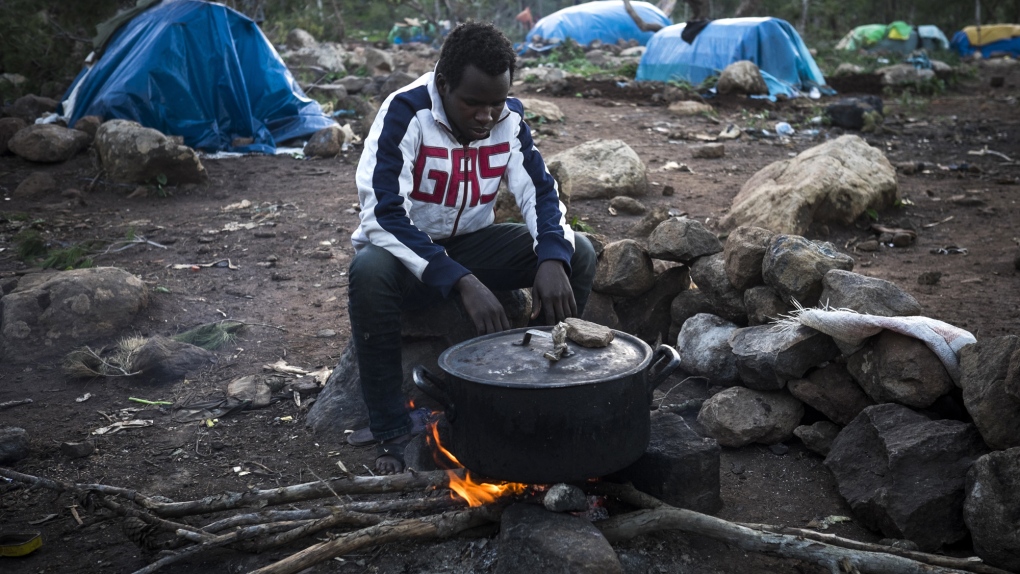 In this Sunday, Nov. 9, 2014 photo, a Guinean immigrant cooks dinner at a clandestine immigrant camp located at the Mount Gourougou, in the Moroccan province of Nador. (AP / Santi Palacios)

Police, gendarmes and riot squads climbed rugged Mount Gourougou, rounded up 1,200 migrants who had been squatting there in tents and bused them to remote towns in southern Morocco like Taroudant and Rachidia.

"This is the biggest sweep since I've worked on immigration," said Adil Akkid from the Moroccan Association of Human Rights.

The raids, which started early Tuesday, came after the Interior Ministry announced that the illegal migrant camps there and elsewhere would be dismantled as part of a new immigration policy. The government on Wednesday described the operation as the "liberation" of migrants forced to live on the mountain by human traffickers.

For the past year, sub-Saharan migrants have made almost weekly attempts to reach Europe via the two Spanish enclaves on the Moroccan coast, Melilla and Ceuta. Spain says 2,000 migrants crossed into the enclaves in 65 storming attempts last year.

Several hundred migrants made one last attempt to storm Melilla's fences on Tuesday morning. Most were repulsed but Spanish authorities said 35 made it across.

Human rights organizations have criticized both Morocco and Spain for their harsh treatment of the migrants.

Morocco is caught in a bind, with its northern neighbours demanding that it halt the flow of immigrants but criticizing any harsh tactics as violations of human rights.

In response, the kingdom has developed a new immigration policy allowing migrants to live and work in the country. In the last year it has granted residency to 18,000 of them.

Hicham Arround from Asticude, a group that deals with migration, said around 200 migrants had escaped this week's sweep and were still living on the mountain. He said those detained were for the most part well treated.