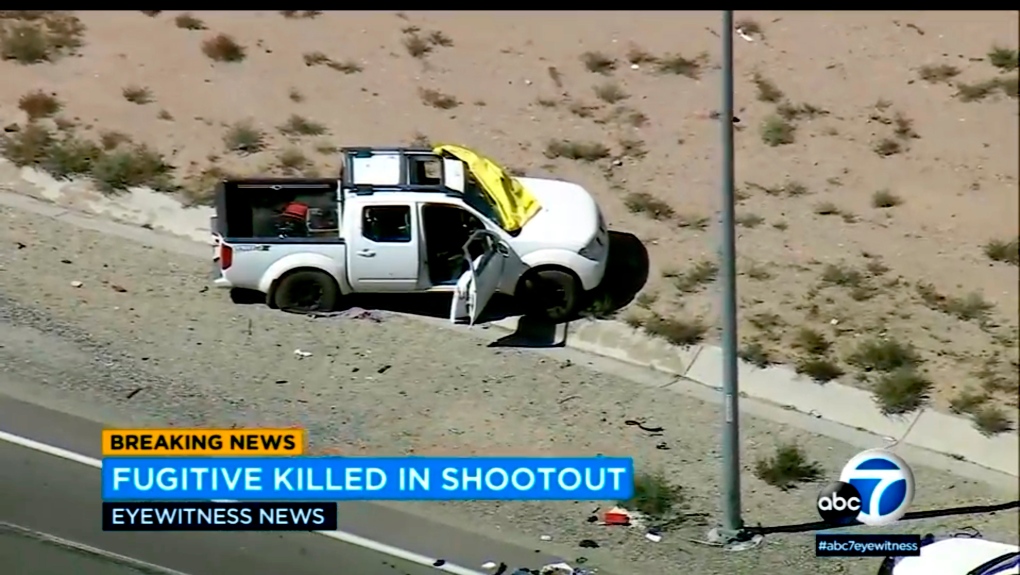 This image from video provided by KABC-TV shows a truck owned by Anthony John Graziano after a shootout on a highway in Hesperia, Calif., on Tuesday, Sept. 27, 2022. (KABC-TV via AP)
LOS ANGELES -

A Southern California man suspected of killing his estranged wife and abducting their 15-year-old daughter had been living with the teenager out of his pickup truck and hotels for weeks before the violence, authorities said Wednesday.

Anthony John Graziano and his daughter, Savannah Graziano, were killed Tuesday in a shootout with law enforcement on a highway in the high desert east of Los Angeles after a 45-mile (72-kilometre) chase. Shots were fired at the officers from the pickup truck as it was being chased.

Once it came to a stop, the girl, wearing a tactical helmet and vest, got out and ran toward deputies amid a hail of gunfire, police said, Authorities are investigating whether she was shot by deputies or her father, or both.

Police have said the only weapon retrieved at the scene was a rifle in the truck, where Anthony Graziano died. There is police video of the shootout that authorities were reviewing.

While many questions remain regarding Tuesday's gunbattle, police in Fontana -- where Graziano's wife, Tracy Martinez, was killed Monday -- offered some details about the family's life before the bloodshed.

Anthony Graziano had moved out of the family's home a month or two before the killing, as the couple went through a divorce, Fontana Sgt. Christian Surgent told The Associated Press. Savannah Graziano left with her father, while her younger brother stayed with their mother.

Police issued an Amber Alert after Martinez's killing, saying Savannah Graziano had been abducted by her father. Now, detectives are trying to determine whether or not she was forced into leaving Fontana.

"Did she go willingly?" Surgent said. "Or was she actually abducted? We haven't been able to prove that just yet."

Fontana police had not received any reports of domestic violence at the home before this week, Surgent said, and child services had not been involved with the family. Neither parent was on probation or parole at the time and investigators believe Savannah was being home-schooled while she lived with her father, who police said liked to camp out in the desert and mountains in his pickup truck.

On Monday, witnesses saw Martinez walking in Fontana when Graziano picked her up in his truck. Surgent said it was not clear whether she was forced into the vehicle or got in on her own.

"And immediately that's when they started arguing and yelling and domestic violence was occurring," he said.

Martinez got out of the truck and Graziano opened fire with a handgun, striking her multiple times, Surgent said. The shooting on the street near an elementary school during morning drop-off forced students and parents to duck for cover.

Graziano fled and drove to get Savannah, who likely was wherever they had been staying that day, Surgent said. The son was at the family's home at the time and was not involved.

The next day, a 911 caller reported seeing the suspect's Nissan Frontier around Barstow, nearly 70 miles (112 kilometers) north of Fontana.

Law enforcement located the pickup truck and chased it on the highway to Hesperia. Throughout the pursuit, Graziano was "constantly shooting back at the deputies" with a rifle through the truck's rear window, San Bernardino County Sheriff Shannon Dicus said Tuesday during a news conference.

Dicus said there were "some indications" Savannah was shooting at deputies during the chase but didn't provide any details.

A firefight in Hesperia ensued when the truck went off-road and somehow became disabled, with dozens of bullets flying. Savannah ran toward deputies -- who did not realize it was her -- in the chaos and went down amid the gunfire. She was taken to a hospital, where she was pronounced dead shortly before noon.

Her father was found in the driver's seat and pronounced dead at the scene.

The Sheriff's Department declined to release any additional information Wednesday.