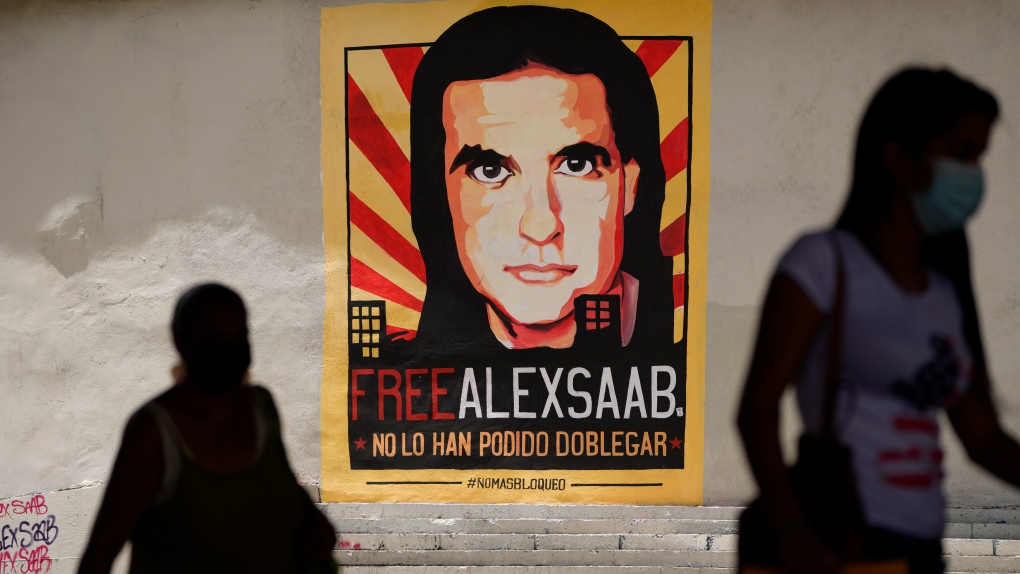 MIAMI -- Venezuela's government said Saturday it would halt negotiations with its opponents in retaliation for the extradition to the U.S. of a close ally of President Nicolas Maduro who prosecutors believe could be the most significant witness ever about corruption in the South American country.

Jorge Rodriguez, who has been heading the government's delegation, said his team wouldn't travel to Mexico City for the next scheduled round of negotiations.

The announcement capped a tumultuous day that saw businessman Alex Saab placed on a U.S.-bound plane in Cape Verde after a 16-month fight by Maduro and his allies, including Russia, who consider the Colombian-born businessman a Venezuelan diplomat.

A few hours after news of Saab's extradition blew up Venezuelan social media, six American oil executives held on house arrest were picked up by security forces -- a sign that relations between Washington and Caracas could be upended after months of quiet diplomacy since Joe Biden entered the White House. Families of the men known as the Citgo 6 -- for the Houston subsidiary of Venezuela's state-owned oil company where they worked -- fear they could be thrown back into jail.

"The fact that Mr. Saab is in the U.S. before my father is a disgrace," said Cristina Vadell, whose father, Tomeu Vadell, is among the Americans serving out long sentences in the country on what the U.S. government considers trumped-up charges.

Vadell described the men as currently disappeared, adding that "this is additional proof that these Americans are held hostage in Venezuela, and President Biden's administration needs to recognize this and win their release immediately."

Saab is expected to make his initial appearance in court on Monday in Miami, according to Justice Department spokesperson Nicole Navas Oxman, who expressed gratitude and admiration to the government of Cabo Verde for its professionalism and "perseverance with this complex case."

Saab, 49, was arrested in the African archipelago while making a stop on the way to Iran for what Maduro's government later described as a diplomatic humanitarian mission that gives him immunity from prosecution.

He quickly became a revolutionary rallying cry, with Venezuela's government saying months after his arrest that the low-profile businessman had been appointed earlier a representative to the African Union -- credentials whose authenticity and relevance U.S. prosecutors have questioned.

Rodriguez, standing in front of a sign reading "Free Alex Saab," blasted what he said was a "brutal aggression" on the part of a U.S. government that has been trying for years, without success, to oust Maduro. He said the Venezuelan government would denounce his illegal "extraction" in multilateral forums and in protest wouldn't partake in the next round of negotiations, although he stopped short of saying the government would abandon the talks altogether.

"The Government of the Bolivarian Republic of Venezuela deplores this serious violation against the human rights of a Venezuelan citizen, who is invested as a diplomat and as a representative of our country to the world," the Maduro government said in a statement. "This fact sets a dangerous precedent for international law."

Government opponents, including opposition leader Juan Guaido, who the U.S. recognizes as Venezuela's legitimate leader, celebrated the prospect of soon seeing one of Maduro's top insiders behind bars -- something of a moral victory after of string of heartbreaking defeats on the streets trying to break the socialist leader's grip on power.

"What we Venezuelans feel today is justice," said David Smolansky, a Caracas-area mayor who fled into exile after his arrest was ordered for leading protests against Maduro in 2017. "It's the same justice that has evaded us for 22 years. A justice that had to be found beyond our borders. A justice that should seek all those guilty of corruption, crimes against humanity, hunger and the migration crisis."

American authorities have been targeting Saab for years, believing he can unlock the mystery of how Venezuela has been selling gold and tankers full of crude oil in violation of U.S. sanctions. They also believe he holds numerous secrets about how Maduro, the president's family and his top aides siphoned off millions of dollars in government contracts for food and housing amid widespread hunger in oil-rich Venezuela.

Federal prosecutors in Miami indicted Saab in 2019 on money-laundering charges connected to an alleged bribery scheme that pocketed more than $350 million from a low-income housing project for the Venezuelan government.

Separately, Saab had been sanctioned by the previous Trump administration for allegedly utilizing a network of shell companies spanning the globe -- in the United Arab Emirates, Turkey, Hong Kong, Panama, Colombia and Mexico -- to hide huge profits from no-bid, overvalued food contracts obtained through bribes and kickbacks.

Some of Saab's contracts were obtained by paying bribes to the adult children of Venezuelan first lady Cilia Flores, the Trump administration alleged. Commonly known in Venezuela as "Los Chamos," slang for "the kids," the three men are also under investigation by prosecutors in Miami for allegedly forming part of a scheme to siphon $1.2 billion from Venezuela's state-owned oil company, two people familiar with the U.S. investigation told The Associated Press.

But while in private U.S. officials have long described Saab as a front man for Maduro, he is not identified as such in court filings.

The previous Trump administration had made Saab's extradition a top priority, at one point even sending a Navy warship to the African archipelago to keep an eye on the captive.

On Saturday. Colombian President Ivan Duque lauded the extradition of Saab, calling it a "triumph in the fight against drug trafficking, money laundering and corruption led by the dictatorship of Nicolas Maduro."

However, the Biden administration has downplayed the importance of Saab's problems, saying he can defend himself in U.S. courts and that his case shouldn't affect the ongoing negotiations being sponsored by Norway aimed at overcoming Venezuela's long running economic crisis and political tug of war.

The families of nine Americans jailed in Caracas are less hopeful that Saab's legal troubled can be disentangled from the furtive attempts at a detente.

In addition to the Citgo 6 -- who were sentenced last year to long prison sentences over a never-executed plan to refinance billions in the oil company's bonds-- they include former U.S. Marine Matthew Heath, who is being held on weapons charges tied to a supposed plan to sabotage refineries, and two former Green Berets Caracas tied to a failed cross-border raid from Colombia to overthrow Maduro.

"In a very disappointing turn of events, American detainees in Venezuela are now being used as political pawns," former New Mexico Governor Bill Richardson, who has traveled to Venezuela to try and secure the Americans' release, said in a statement. "Members of the Citgo 6 are being removed from house arrest and their whereabouts unknown. We had been hoping to do wellness visits with them, but now we fear we will not be given the opportunity."

--AP Writers Jorge Rueda in Caracas, Venezuela and Michael Balsamo in Washington contributed to this report.