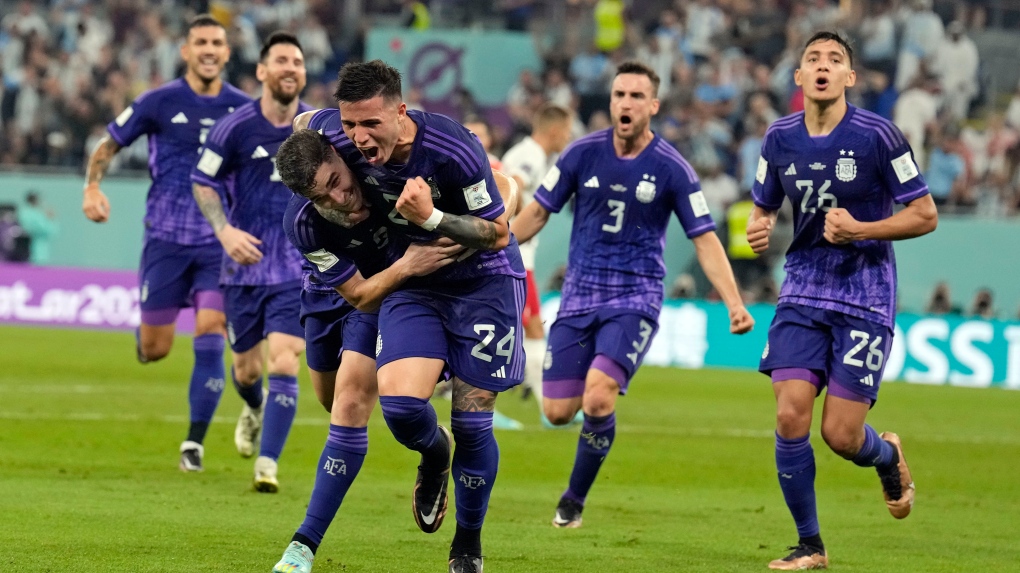 Welcome to Day 11 coverage of the men’s FIFA World Cup. CTVNews.ca has all the match reports, latest injury updates and squad news.

Argentina advanced to the Round of 16 with a 2-0 win over Poland.

Despite the loss, Poland advances to the knockout stage on goal difference after Mexico only beat Saudi Arabia 2-1.

Earlier, Australia dumped Denmark out of the tournament with an impressive 1-0 victory.

Tunisia pulled off its own major upset with a 1-0 win over France but it still left them behind Australia for a place in the Round of 16.

Tuesday’s play saw the Netherlands and Senegal advance from Group A to the Round of 16. England and USA also progressed from Group B with wins.

Here’s all you need to know Wednesday:

Argentina will play Australia in the Round of 16 after a convincing 2-0 win over Poland.

Nerves might have set in after Polish keeper Wojciech Szczesny denied Lionel Messi from the penalty spot in the first half, but Alexis Mac Allister calmed all of Argentina by scoring in the first minute of the second half.

Julian Alvarez followed up with a super finish into the top right corner of the Polish net in the 67th minute to settle matters.

Poland will play France in the next round after having escaped Group C with four points and a better goal difference than Mexico.

Mexico beat Saudi Arabia 2-1 but the math didn't work out in the winning side's favour.

Mexico huffed and puffed but just couldn't get the ball in the net another time, although they did have two goals correctly ruled out for offside.

Saudi Arabia killed off Mexico's chances with a 95th-minute goal by Salem Al-Dawsari.

Mexico finish third in Group C with four points and one goal behind Poland, while Saudi finishes last despite a shock win over Argentina in its first match.

France had already clinched a place in the next round and head coach Didier Deschamps elected to rest virtually all of his main players.

The win gave Tunisia four points for the group stage, but Australia advanced with six after defeating Denmark.

Australia pulled off a massive 1-0 upset win over Denmark to dump the Euro 2020 semifinalist out of the competition.

Mathew Leckie did extremely well to score the winner in the 60th minute after receiving the ball on a counter with still two defenders and the goalkeeper to beat.

Needing a win, Denmark seemed extremely uninspired in the final third and never looked a serious threat to score.

Canada midfielder Stephen Eustaquio is nursing a hamstring injury and did not take part in Tuesday’s training ahead of their match against Morocco on Thursday.

American Christian Pulisic is listed as day-to-day after sustaining a pelvic injury in the U.S.'s 1-0 win against Iran.

Portuguese superstar Cristiano Ronaldo may be on the verge of a move to Saudi Arabia club team Al-Nassr.

Day 12 sees Canada play its final match of the tournament. Listed below are all the Thursday fixtures: