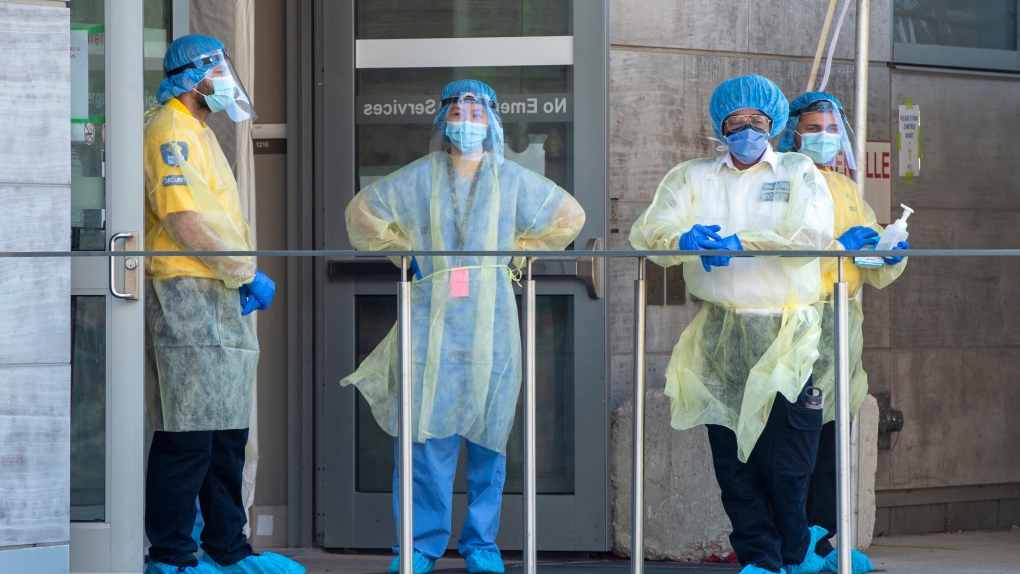 In this file photo, security guards and a heath-care worker wait for patients at the Women's College Hospital COVID-19 testing centre in Toronto on Saturday June 6, 2020. (THE CANADIAN PRESS / Frank Gunn)

TORONTO -- Keeping the novel coronavirus at bay will require many more months of physical distancing, ramped-up testing and contact tracing, quarantining and workplace and community closures to handle outbreaks, says a new report published in the Canadian Medical Association Journal.

The authors pointed out that while Canada has been “largely successful” in controlling COVID-19 nationally, it’s essential to continue to use intervention methods as we reopen the country.

Because without any public health interventions, two thirds of Canadians will be infected with COVID-19, according to the report.

“If we release restrictive closures without ramping up other public health measures, the epidemic will resurge with a magnitude depending on our future effort and could exceed the capacity of our health care system and require the reimplementation of lockdown restrictions,” the researchers said in the report.

The research, led by Victoria Ng, an epidemiologist and mathematical modeller with the Public Health Agency of Canada’s National Microbiology Laboratory, developed models based on four potential scenarios for public health measures put in place from Feb. 7, 2020 to Jan. 7, 2022 -- 700 days in total.

Aamir Fazil, Chief of Risk Integration Synthesis and Knowledge Section at the Public Health Agency of Canada, explained that they “wanted to have a two-year horizon” for the models.

“We felt that a two year window would allow if there were any potential spikes occurring,” he told CTVNews.ca in a phone interview.

To see what could occur over the next two years, depending on what health measures Canada takes, researchers used agent-based modelling.

This type of modelling uses computer simulations composed of “agents that can represent people, places and objects,” the reports states.

These models allow agents with individual, unique characteristics to interact with each other within the model environment, meaning it is helpful for “simulating events that occur by chance.”

“Agent-based models are particularly suited for studying the effectiveness of interventions as these are highly dependent on community structure and population dynamics,” the report says.

To create a baseline representation of the Canadian response, they looked at the specific intervention methods from Feb. 7 to May 10, which was when the strictest community lockdown measures first began to slowly lift.

Building on this information, they modelled four scenarios to see how transmission could continue based on preventive measures moving forward from May 11.

The researchers found that public health measures have remarkable results, determining that without any interventions, 64.6 per cent of Canadians would become infected with the virus. That is what the researchers called the total attack rate.

If baseline testing and contact tracing continued, but there was no physical distancing or other restrictions, 56.1 per cent of Canadians would be infected. This was scenario one: minimal control. Scenario two added physical distancing back in, which dropped the attack rate to 41.6 per cent.

But the third and fourth scenario were where the real effect happened.

With “enhanced case detection and contact tracing” (defined by the modelling as detecting and isolating 50 per cent of cases rather than a baseline 20 per cent) the total attack rate plummeted to 0.4 per cent.

And the modelling showed that in the final scenario, combining detection and isolation of cases with physical distancing would reduce the attack rate to 0.2 per cent and “was the only scenario that consistently kept hospital and intensive care unit bed under capacity, prevented nearly all deaths and eliminated the epidemic,” the researchers said.

In terms of the potential death toll, in the minimal control scenario, around 1,100 people would die per 100,000 people, which would amount to more than 413,000 people when applied to the entire Canadian population.

This was still 320 fewer deaths per 100,000 than there would be if we had no intervention methods moving forward.

In the best case scenario -- where enhanced case detection, contact tracing and isolation was combined with physical distancing -- only two people out of 100,000 would die when these interventions were combined.

The researchers noted that the “only intervention able to extinguish the epidemic on its own was partial community closure” -- meaning a continuation of 40 per cent of workplaces and 50 per cent of mixed-age gathering areas being closed, the way they were during the strictest lockdown measures between March 16 and May 10.

However, models indicate this strategy would take 18 months, making it “likely unrealistic for such a restrictive intervention.”

“It is effective at reducing the public health impact, but we recognize obviously that there are other implications to such a strategy,” Fazil said.

One intervention method that has shown success in other countries was absent from the modelling: face masks.

Many provinces or cities within Canada now recommend or require the use of face masks in indoor spaces or where physical distancing is not possible.

“The issue of face masks is something that we would like to consider in the next iteration of the model,” Fazil said. “The model [shows] a limited number of sort of scenarios that you can run, but I think face masks and exploring its implications on the trajectory would be something that we'd like to do next.”

And at a time when teachers, parents and students are gearing up for a return to classrooms in a few weeks, the researchers found closing schools helped to reduce the spread of COVID-19 within those settings, but didn’t have much of an impact in minimizing the number of cases overall, whereas closing workplaces and “mixed-age venues markedly reduced attack rates.”

“When we have high levels of community transmission combined with minimal public health interventions and low adherence to physical distancing, school closures will have a minimal impact in combination with these interventions and will not be sufficient to control the epidemic,” said Ng in a statement.

“In contrast, workplace and general community closures were much more effective, because transmission outside of the household is occurring predominantly in these settings.”

Fazil said that the most important takeaway from the models is that a “layered approach,” is going to be necessary as the months pass.

“There's not one magic solution that's going to sort of stamp out the epidemic,” he said.

“As you increase opening up workplaces, et cetera, you also have to maintain additional public health measures. So picking up contact tracing, increasing the ability to detect cases, physical distancing is something that I think needs to be maintained as much as possible.”

And although many are likely yearning for the day when they can interact with as many people as they did before, he added that “reducing the number of contacts” that you have is a “critical, ongoing factor.

“Not only from the point of view of reducing the probability of the public getting in contact with a potentially infected person, but also from the contact tracing point of view,” he pointed out. “As you limit the number of contacts, you reduce your risk, but you also improve the chances of contact tracing being effective, because there are a few contacts that have to be traced.”

Because the model aggregates data from across Canada, it doesn’t account for specific hotspots for transmission, such as long-term care facilities or health care workers. They acknowledge that a national model cannot fully address these regions of transmission.

A related commentary in the same issue of CMAJ argued that public compliance with pandemic measures is an important consideration “particularly as the burden of infection is reduced, the threat begins to feel less urgent, and ‘pandemic fatigue’ sets in.

“In the absence of a vaccine or other therapeutic breakthrough, a long road lies ahead.”

Ashleigh Tuite, an epidemiologist at the University of Toronto, and Amy Greer, who holds a Canada Research Chair in population disease modelling at the University of Guelph, say health officials will have to carefully and strategically impose measures to control transmission of the virus.

“Ultimately, there is no route that will not disadvantage some groups, which means choosing carefully which aspects of our society and economy are most important to us.”