TORONTO -- In mid-March, Chandra Pasma and her family began to feel unwell. She and her husband came down with a fever, sore throat, and dry cough before their three children followed suit soon after.

Pasma’s nine-year-old daughter, Mira, seemed to fare better with only a mild fever and sore throat.

In a couple of weeks their initial symptoms had abated and Pasma said they thought they had recovered.

But they were not out of the woods yet.

Since March, all five of them have experienced varying and sometimes debilitating symptoms that would appear, disappear, and reappear with little warning.

Luc was unable to stop coughing for 12 straight weeks. For Clara, it was 18 weeks and she was often left gasping for breath. The twins also had recurring bouts of chest pain, fatigue, and nausea.

“That was really difficult to manage,” Pasma told CTVNews.ca during a telephone interview in late July. “It felt like for the longest time, nothing worked.”

Even Mira, who was mildly ill in March, had several relapses of fever and sore throat in the following weeks. She also came down with new symptoms, including skin rashes, mouth sores, headaches, and blocked lymph nodes, for months. 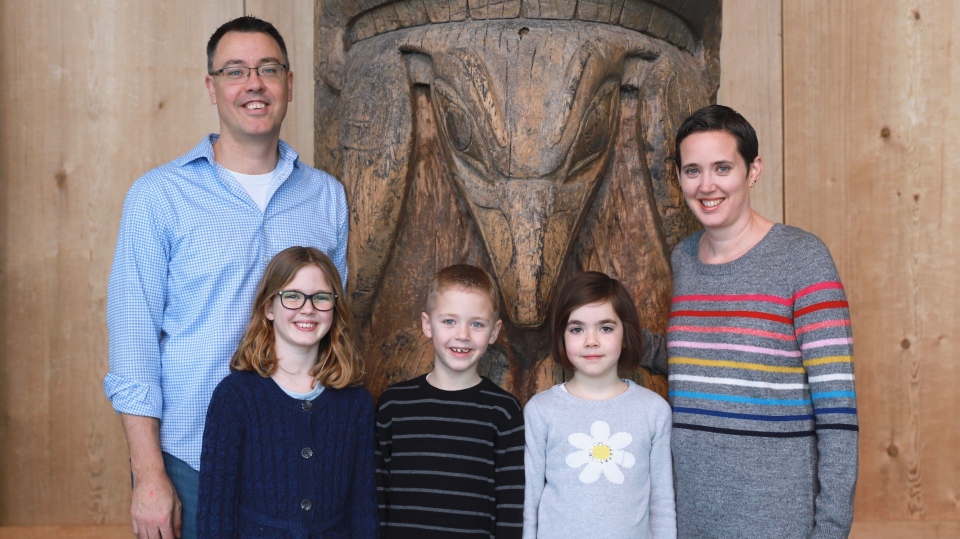 Because they hadn’t travelled outside the country, didn’t require hospitalization, and weren’t aware of any exposure to a known case of COVID-19, the family wasn’t eligible for testing when they first developed symptoms.

It wasn’t until later that Pasma learned they might have been exposed to the virus at their children’s bus stop because an individual who also regularly waited there had tested positive for the disease and became one of Ottawa’s first confirmed cases.

Their family doctor had also told them they were probable COVID-19 cases based on their symptoms, even though Pasma and her youngest daughter received negative results when they were finally tested weeks after their initial illness.

Pasma is one of several parents who contacted CTVNews.ca to share how their children have experienced long-lasting and sometimes debilitating symptoms from what they believe is a coronavirus infection.

While the existence of chronic symptoms potentially related to COVID-19 has been well-documented in adult “long-haulers” in recent months, the similar experiences of children have been largely left out of the conversation. That’s partially because experts say these long-term symptoms are rarer in children than in adults and because the majority of younger people appear to be asymptomatic or have mild symptoms if they do contract the virus.

Despite the rarity, Pasma and others like her want people to know that it can affect all ages with varying degrees of severity.

“We know firsthand how dangerous this illness can be and that even if the risk of serious illness and death in kids is lower than for adults, it doesn’t mean that kids won’t be sick for a very long time or that there might not be some permanent damage caused to their bodies, whether it's the development of asthma or just long-term inflammation,” Pasma said.

Sherri Godby has been going through a similar experience these past few months with her three children. She said she believes they may have been infected with coronavirus in March when a friend of hers fell ill, but they have never tested positive for COVID-19 because they, too, were tested too late.

Godby’s 10-year-old foster son, Kaden, has had a particularly difficult time with the symptoms he’s experienced on-and-off again since March. It began with a rash all over his upper torso and arms.

In April, Kaden complained of pain in his feet when he tried to kick a ball.

“I thought ‘Holy cow!’ His toes were so bad,” Godby recalled during a telephone interview from her home in Edmonton. “They were purple and red and they were inflamed and blistered.”

When she took him to the hospital, she was told he likely had “COVID toes,” as it’s commonly called, which involves the development of painful lesions on the hands and feet and typically affects younger adults and children. 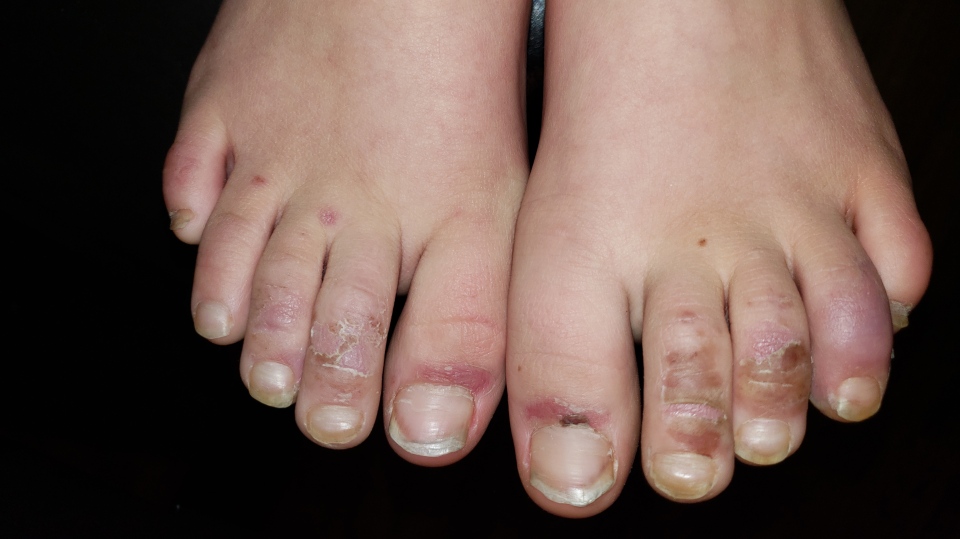 Godby said the lesions on Kaden’s toes eventually disappeared after approximately two months, but he still has a rash on his upper body and arms and she took him to the hospital in early July because he was vomiting and had diarrhea.

Her other two children have had sporadic chest pain and problems breathing.

For Lisa Audet’s two daughters, Chloe, 14, and Laina, 12, their spring and summer has been marred by ongoing waves of new and unexpected symptoms.

Audet said she believes she and her husband and two daughters contracted coronavirus while they were on a trip to Las Vegas and Arizona in February. She said they all experienced symptoms in early March when they returned to their home in Thunder Bay, Ont.

Like Pasma and Godby, her family never tested positive for COVID-19 even though a health-care professional with Ontario’s public health Telehealth phone service told her they should be considered presumptive cases.

In March, Chloe had relatively mild symptoms of fatigue, chest pressure, sore eyes, and intermittent nausea while Laina only had some sniffles and sore eyes. 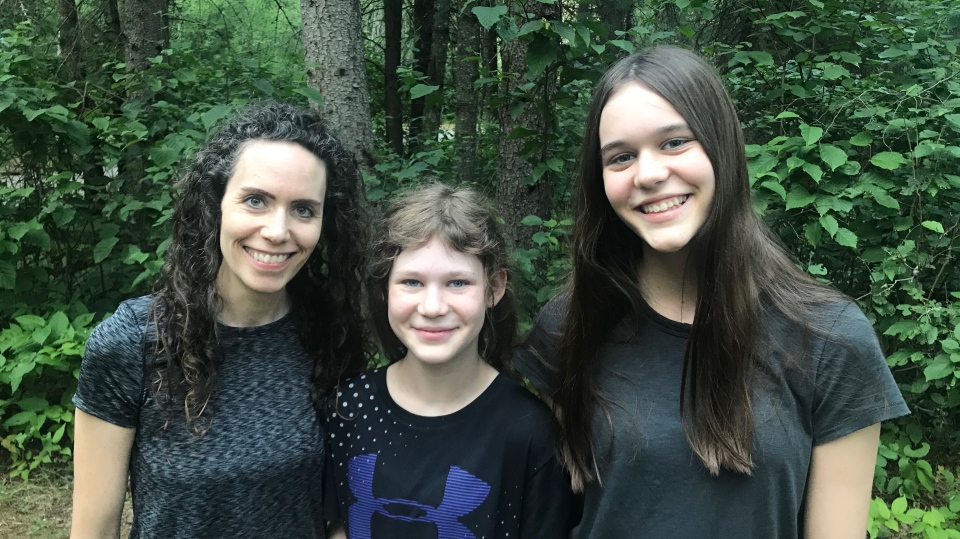 A month-and-a-half later, however, Audet said her 14-year-old daughter’s nausea returned a long with some new symptoms, including numbness in her tongue, tingling and numbness in her face, extreme fatigue, tingling in her feet, and a persistent rash and discharge from her eyes.

By the beginning of August, Chloe still has fatigue and intermittent tingling in her feet. Her younger sister, Laina, has also experienced waves of fatigue and severe headaches, which Audet said is unusual for her.

“It’s really scary because we don’t know what the future will be,” Audet told CTVNews.ca in early August. “We don’t know if there’s going to be long-term damage so it’s quite frightening.”

Dr. Iris Gorfinkel, a family physician and medical researcher in Toronto, said the reason why some children may experience post-COVID-19 symptoms for long periods of time is still unclear.

Like in adults, there could be several explanations for why children may also have waves of new symptoms that can reoccur over weeks and even months.

Gorfinkel said the virus could be causing direct damage to the body’s organs resulting in long-term problems for the individual.

She also said there’s the possibility the virus is responsible for inciting an immune condition in which the body produces antibodies that fight the disease, but also cross-react with its own tissue and causes a chronic autoimmune problem.

Finally, Gorfinkel said some people’s bodies may go into overdrive and they develop a hyper-immune response in which the immune system begins to attack its own organs after the virus is long gone.

“It's hard to know. I don't think we have good data on it just yet,” she told CTVNews.ca during a telephone interview in late July.

Gorfinkel said pediatric research on how the disease affects children lags behind research into adults because the deaths have primarily been among older individuals. She said that as time goes on, they will be able to understand more about the disease’s impact on children.

“From the fatigue to the brain fog, relapsing fever, diarrhea, to the rashes… what are the numbers there? I wish I could tell you, I simply do not know nor do I know of a counter,” she said. “We cannot assume that number is zero. I think that's very dangerous thinking... I think we have to come at it from the perspective of yes, kids are going to have some fallout from this, we just don't know what that is.”

That’s why Gorfinkel said there’s a need for further research dedicated to studying the long-term effects of COVID-19 in children.

Gorfinkel did say, however, that serologic data has shown that older children between the ages of 10 to 19 years of age appear to have a similar antibody response to the virus as those aged 20 to 49. She said this means it’s more likely for older children to experience more severe, long-term symptoms of the disease than younger ones.

Dr. Anna Banerji, a pediatric infectious disease specialist in Toronto, agreed that adults are far more likely to experience chronic post-COVID-19 symptoms than children. She cited mononucleosis or “mono” and chickenpox as examples of other viruses that can cause more severe symptoms in adults than in children.

And while Banerji said it’s certainly possible for children, particularly older ones, to have these symptoms, they will be in the minority.

“Most of them will have minimal symptoms that are nothing more than a cold,” she told CTVNews.ca during a telephone interview in late July. “It would be extremely rare for them to have more chronic symptoms.”

Banerji also stressed that parents shouldn’t be afraid to send their children back to school in the fall because their risk for long-term symptoms is low.

“We need to get the kids back to school because there’s real harm being done to children, especially mental health, compared to the extremely low risk of having some of the chronic symptoms related to COVID,” she said.

Even after her own family’s struggle with illness, Pasma said she, too, wants her children to return to school in the fall because she thinks it will be beneficial to their overall well-being.

Nevertheless, she said she wants other people to be aware of the potential consequences in children, however rare they may be, so they take public health guidance seriously and practice safe physical distancing and hygiene in schools.

“I see a lot of people talking about opening schools again, talking about how kids don't get sick, or there's no real risk to kids, and I want the conversation to be an accurate reflection of what the situation is, that kids do get sick and some kids will get very sick and be sick for a long time,” she said.