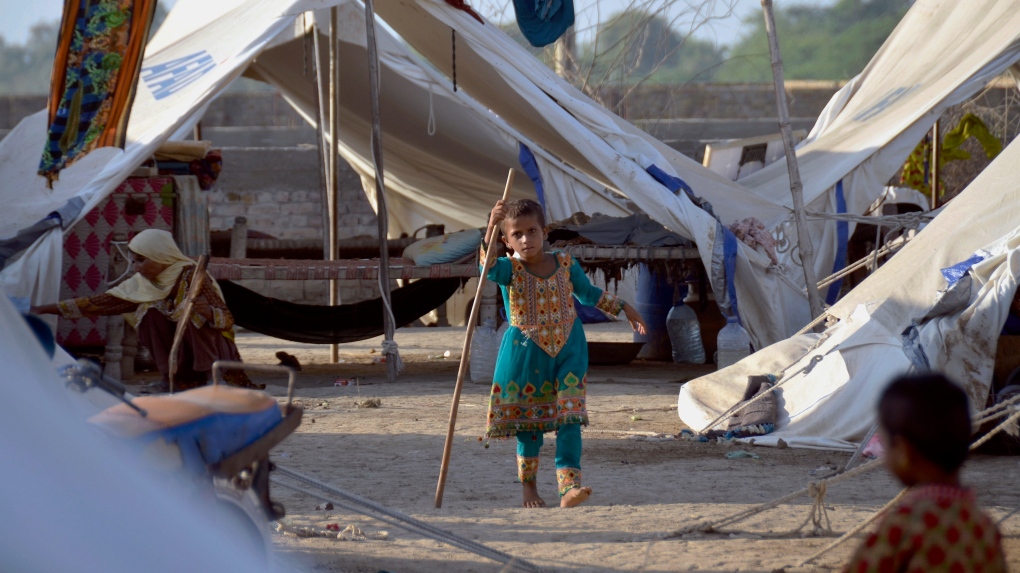 A young girl plays outside her tent at a relief camp, in Jaffarabad, a district in the southwestern Baluchistan province, Pakistan, Thursday, Sept. 29, 2022. (AP Photo/Zahid Hussain)
ISLAMABAD -

Alarmed by a surge in disease, the United Nations is asking for five times' more international aid after deadly floods in Pakistan left millions of survivors homeless and at rising risk of waterborne diseases and other ailments.

The UN on Tuesday raised its request to US$816 million from US$160 million, saying recent assessments pointed to the urgent need for long-term help lasting into next year.

The request in Geneva came a day after Julien Harneis, the UN coordinator for Pakistan, said diseases such as malaria, dengue fever, scabies and malnutrition are fueling a "second wave of death and destruction," with children and women in its path.

Floods in impoverished Pakistan have affected 33 million people and killed at least 1,696 since mid-June. Pakistan says the record-breaking floods have caused at least US$30 billion in damages. The disaster displaced 7.9 million people. Of them, half a million are still living in tents and makeshift homes.

Doctors in Pakistan are trying to contain the outbreak of waterborne and other diseases which have caused nearly 350 deaths in flood-affected areas since July.

On Tuesday, Harneis said that the UN is issuing the revised appeal to meet the urgent needs of the flood victims. "We need all of these funds and we need them quickly," he said

Harneis said an international support conference will be held later this year to seek more funding for rehabilitation and reconstruction in flood-hit areas, where deluges have wreaked havoc.

The World Health Organization in recent weeks has repeatedly warned about a "second disaster" in the wake of the deadly floods in Pakistan, where thousands of doctors and medical workers on the ground are battling outbreaks of waterborne and other diseases in flood-hit areas and hospitals are overwhelmed.

WHO Director-General Tedros Adhanom Ghebreyesus said about 10 per cent of all of Pakistan's health facilities were damaged in the floods, leaving millions without access to health care.

"We must all work together to support the people of Pakistan -- we need an integrated approach that puts less emphasis on the work of each agency, and more on the needs of people," he said, adding that "the water has stopped rising, but the danger has not" and "we are on the verge of a public health disaster."

He said more than 2,000 women in flood-hit areas were giving birth every day, most in unsafe conditions.

Floodwaters have receded up to 78 per cent in Pakistan's worst-hit southern Sindh provinces, but displaced people are still living in tents and makeshift camps. They have increasingly been suffering from gastrointestinal infections, dengue fever and malaria, which are on the rise.

Rehman said despite contributing less than 1 per cent of global greenhouse gas emissions, Pakistan was facing the crisis because of climate-induced flooding.

Also Tuesday, the United Nations' report said the heavy monsoon rains and a combination of river, urban and flash flooding led to an unprecedented climate-induced agricultural and infrastructure destruction in Pakistan.

The report said the disaster put at risk the education of more than 12 million school-aged children in the food-hit districts in Pakistan, where the deluges damaged at least 25,187 schools.

Landslide leaves up to a dozen missing on Italian island

Heavy rainfall triggered landslides early Saturday on the southern Italian island of Ischia that collapsed buildings and left as many as 12 people missing.