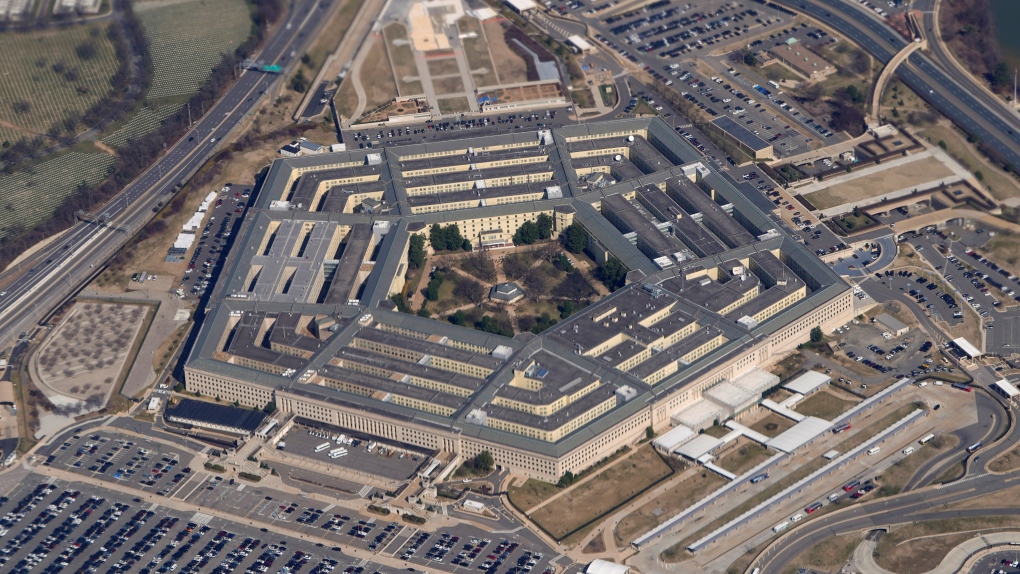 The Pentagon is seen from Air Force One as it flies over Washington, March 2, 2022. (AP Photo/Patrick Semansky, File)

Members of the Pentagon's UFO task force briefed Canadian military officials earlier this year, a previously unreported meeting that was revealed this week.

The Feb. 22 briefing was led by a U.S. Air Force intelligence officer who contributed to a headline-grabbing June 2021 report on recent American military sightings of unidentified aerial phenomena, or UAP: the term U.S. authorities use for what are more commonly known as unidentified flying objects and UFOs.

According to a document released on Nov. 14, the February briefing was delivered by "multiple" members of the Pentagon's UAP Task Force and attended by 10 Canadian defence officials, including personnel from the Royal Canadian Air Force and Canadian Forces Intelligence Command, which is responsible for collecting and assessing military intelligence.­

The document provided few other details.

"Officials from the [Department of Defence] UAP Task Force and the National Intelligence Manager for Aviation met with Canadian Department of National Defence and Royal Canadian Air Force officials on Feb. 22, 2022, as part of our continued partnership on airspace security, to include Unidentified Aerial Phenomena," U.S. Department of Defence Spokesperson Susan Gough told CTVNews.ca.

Canada's Department of National Defence was unable to provide comments ahead of publication.

"It’s clear the American UAP Task Force wants to work with our government," Conservative defence critic James Bezan told CTVNews.ca on Tuesday from Ottawa. "Any attempts from Government of Canada officials to downplay either the data or the reports would be completely unacceptable."

Bezan believes Canada should be following the United States' lead and investigating UAP.

"The Canadian government needs to implement a scientific plan to identify the origins and intent of UAP," Bezan, member of Parliament for Selkirk-Interlake-Eastman in Manitoba, explained. "Conservatives believe the best way to start that process is for government to adopt a streamlined, whole-of-government approach to standardize the collection of reports across numerous departments and contractors… All efforts undertaken to investigate UAP should be made public in a responsible manner. "

For its part, the Canadian military routinely states that it does "not typically investigate sightings of unknown or unexplained phenomena outside the context of investigating credible threats, potential threats, or potential distress in the case of search and rescue."

Since 2016, at least four cases appear to have met that criteria.

The single February 2022 briefing from U.S. officials was revealed by Canada's Department of National Defence in a Nov. 14 reply to questions posed by Conservative member of Parliament Larry Maguire.

Maguire, the Conservative representative for Brandon-Souris in southwestern Manitoba, had used an accountability mechanism MPs have to ask the federal government to provide a written account of alleged contacts with U.S. military and intelligence officials on the subject of UAP. While Global Affairs Canada said there had been no contacts, National Defence acknowledged the February briefing in its reply to the Sept. 22 order paper question. Similar to verbal queries during question period in Parliament, order paper questions allow MPs to seek information from the government, but in writing. These responses are then tabled in the House of Commons. 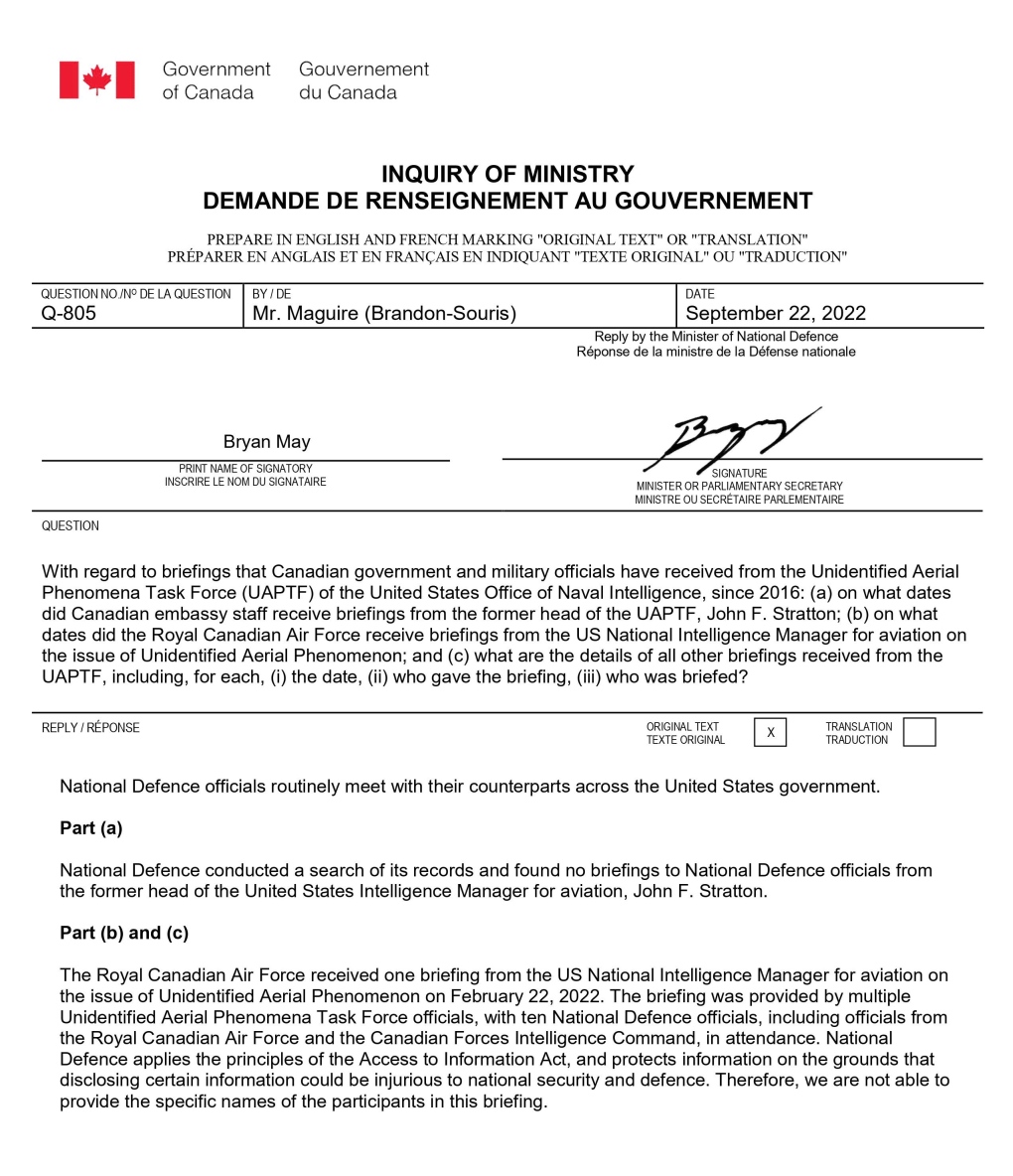 Opposition Member of Parliament Larry Maguire received the above response on Nov. 14 to questions he posed in September on the Canadian government's contacts with U.S. officials on the subject of unidentified aerial phenomena, or UAP.

An activist farmer and MP since 2013, Maguire is perhaps the most vocal proponent for UAP transparency on Parliament Hill; he has sought information from former U.S. officials and has used his committee work to probe the government for answers.

"From the meetings our government has already had with the UAP Task Force, one would think they have a good idea of where to start and begin the process to investigate the entire topic," Maguire, who was unavailable for comment, wrote on Twitter on Tuesday. "If there was ever an issue that MPs could work on in a collaborative manner, this is it. I hope folks start writing their MPs and encourage them to work together on this."

Also in a Tuesday tweet, Maguire revealed that he has asked Canada's chief science advisor to launch an official UAP study.

"In fact, my team has kept me informed of the recent initiatives in the U.S. on UAPs," Chief Science Advisor Dr. Mona Nemer replied in an Oct. 21 letter posted to Twitter. "My team intends to monitor the next steps in each of these initiatives."

The February 2022 UAP briefing was led by the U.S. National Intelligence Manager for Aviation, who has a mandate to "lead Intelligence Community efforts to identify, analyze, and integrate intelligence on threats and vulnerabilities in the air domain." The position is currently held by U.S. Air Force Major General Daniel L. Simpson.

The U.S. National Intelligence Manager for Aviation's office co-authored the June 2021 UAP report along with the UAP Task Force, and other parts of the U.S. government and military. A publicly-available version of the report outlines 143 unexplained U.S. military reports from 2004 to 2021, which have included objects that appeared to "manoeuver abruptly, or move at considerable speed, without discernable means of propulsion."

The Pentagon's UAP Task Force was established by the U.S. Department of Defense in August 2020 to "improve its understanding of, and gain insight into, the nature and origins of UAPs."

It has since been reformed, and now operates as the All-domain Anomaly Resolution Office. While officials there have found no evidence that UAP have otherworldly origins, they are still working to find explanations for several sightings.

"We know that our service members have encountered unidentified aerial phenomena," Ronald Moultrie, the UAP office's current head, said during a May 2022 Congressional hearing on UAP—the first of its kind in more than 50 years. "We're open to any conclusions that we may encounter."

Canadian military personnel meanwhile have been filing reports for more than 70 years, including sightings from as recently as Nov. 2008 and July 2021. CTVNews.ca previously reported that former Canadian defence minister Harjit Sajjan received a UAP briefing from Canadian defence officials in May 2021, which was followed by a briefing for Transport Minister Omar Alghabra's staff in May 2022.

In Canada, police officers, air traffic controllers and pilots on medical, cargo and passenger flights operated by WestJet, Air Canada Express, Porter Airlines, Delta and more have also filed unusual reports over the past three decades. In most cases, there is little to no official follow-up. Transport Canada, which operates the online aviation incident database where these reports are found, cautions that they "contain preliminary, unconfirmed data which can be subject to change."

Completely agree. Here’s the letter that was sent to Dr. Nemer. pic.twitter.com/sQxJ2InFUO