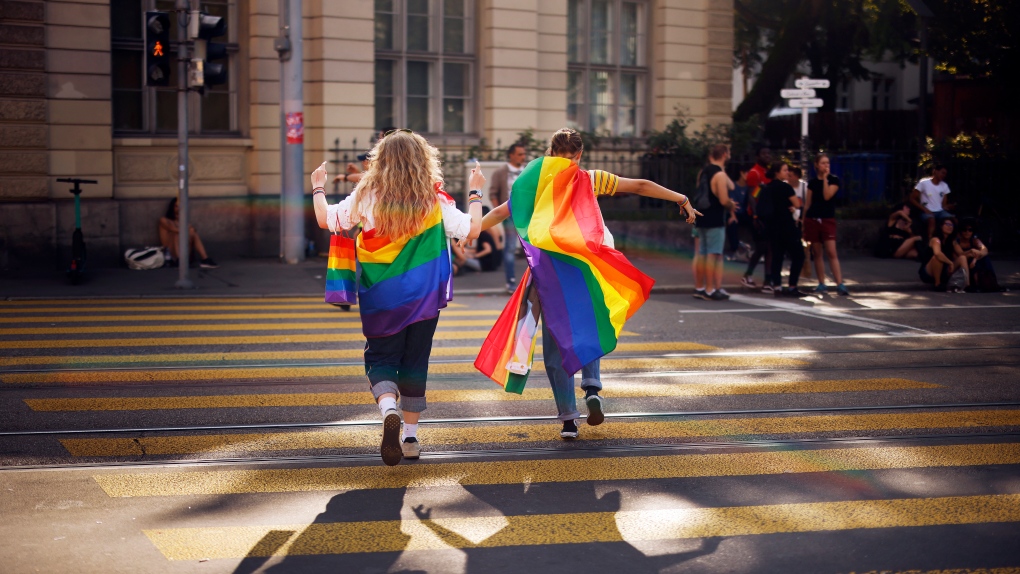 In this Saturday, Sept. 4, 2021 file photo, people take part in the Zurich Pride parade in Zurich, Switzerland, with the slogan "Dare. Marriage for all, now!" (Trau Dich. Ehe fuer alle. Jetzt!) for the rights of the LGBTIQ community. (Michael Buholzer/Keystone via AP, File)

GENEVA -- Cheers rang out, hugs were exchanged and rainbow-colored flags waved overhead across Switzerland as the Swiss resoundingly voted to allow same-sex couples to marry, final results of a nationwide referendum showed Sunday.

Official results showed the measure passed with 64.1% of the vote while more than half of all voters approved in each of Switzerland's 26 cantons, or states. The vote - years in the making - is set to bring the Alpine nation into line with many others in western Europe and wraps up an often tense campaign between rival sides.

Justice Minister Karin Keller-Sutter tweeted that the government will implement the decision quickly and, under current plans, the new rules can take effect on July 1.

Switzerland's parliament and the governing Federal Council -- on which she sits -- had supported the "Marriage for All" measure, which marks a key step for greater rights for gays and lesbians in Switzerland. The country has authorized same-sex civil partnerships since 2007.

"With this, all couples will in the future be treated equally before the law: all can enter into a civil marriage, with the same rights and obligations," Keller-Sutter wrote.

Passage is set to put same-sex partners on an equal legal footing with heterosexual couples by allowing them to adopt children and facilitating citizenship for same-sex spouses. It will also permit lesbian couples to utilize regulated sperm donation.

"This is a historic day for us and for Switzerland, this is a great step forward, something we have been waiting for for years," said Laura Russo, co-president of the Geneva Federation of LGBT Associations, at a gathering of joyous supporters of the measure along a Geneva pedestrian street. "This initiative was begun in 2013; we had to wait 8 years for the vote to happen -- and here, this is a big `Yes."'

Opponents believe that replacing civil partnerships with full marriage rights would undermine families based on a union between a man and a woman.

Benjamin Roduit of the Christian Democratic People's Party, which spearheaded the effort to stop same-sex marriage, claimed at least some success in raising awareness about his party's positions despite the defeat at the ballot box.

"On our side we have tried to draw attention to the central problem, the one of children and medically assisted procreation," he said. "On that point, I think we have succeeded in raising awareness among the Swiss people and we will still be here when other steps will be proposed."

The campaign has been rife with allegations of unfair tactics, with the opposing sides decrying the ripping down of posters, LGBT hotlines getting flooded with complaints, hostile emails, shouted insults against campaigners and efforts to silence opposing views.

Switzerland, which has a population of 8.5 million, is traditionally conservative and only extended the right to vote to all women in the country in 1990.

Most countries in Western Europe already recognize same-sex marriage, while most of those in Central and Eastern Europe don't permit wedlock between two men or two women.

At a polling station in Geneva, voter Anna Leimgruber said she cast her ballot for the "no" camp because she believed "children would need to have a dad and a mom."

But Nicolas Dzierlatka, who voted "yes," said what children need is love.

"I think what's important for children is that they are loved and respected -- and I think there are children who are not respected or loved in so-called 'hetero' couples," he said.

Also on Sunday, voters dismissed a proposal spearheaded by left-wing groups to raise taxes on returns from investments and capital such as dividends or income from rental properties in Switzerland as a way to ensure better redistribution and fairer taxation.

Results showed 64.9% voting against it in a country known for its vibrant financial sector and relatively low taxes, and as a haven for many of the world's richest people. No canton voted in favour.