Growing risk of once-in-a-century solar superstorm that could knock out internet, study says 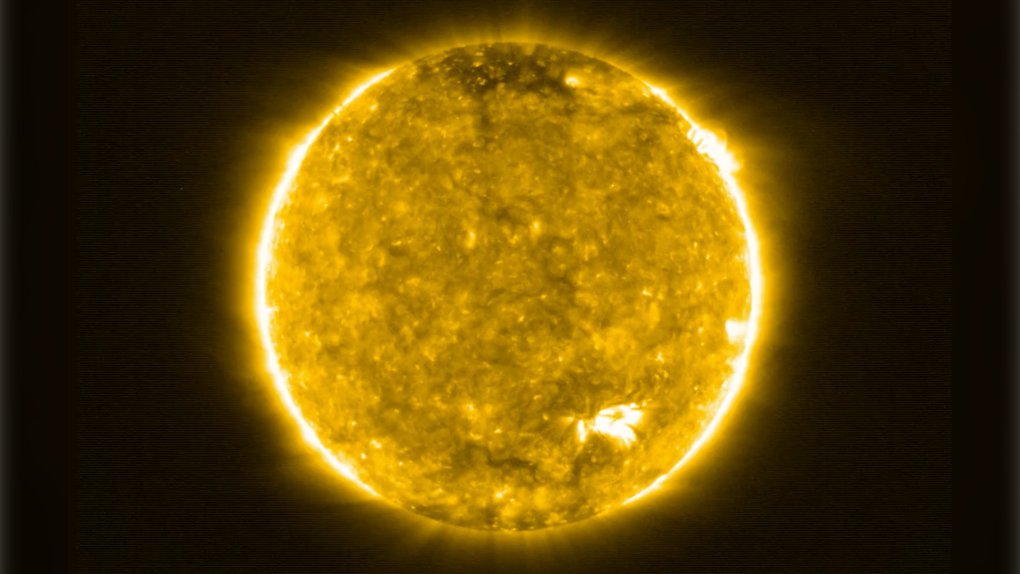 TORONTO -- Imagine if one day the internet was down not just in your neighbourhood, but across the globe, knocked out by a threat from space: an enormous solar superstorm.

It sounds like science fiction, but a new study says it could become our reality earlier than we think if we don’t prepare properly for the next time the sun spits a wave of magnetized plasma at us.

“Astrophysicists estimate the likelihood of a solar storm of sufficient strength to cause catastrophic disruption occurring within the next decade to be 1.6 — 12 per cent,” the study states.

“Paying attention to this threat and planning defenses against it, […] is critical for the long-term resilience of the internet.”

It paints a scary picture of what could happen if an enormous solar storm hits us: submarine cables between countries shut down, power grids offline, data centres from web giants at risk of going dark.

But how do we even start protecting against it?

Solar activity isn’t easy to predict. While we know that the sun has an 11-year cycle that lets us track when solar activity will be higher, whether these high points will have harmless solar flares or large-scale solar weather events isn’t easy to pinpoint.

The sun also has a longer cycle that takes approximately 80-100 years called the Gleissberg cycle, in which large-scale solar events during solar maxima (the high point of the 11-year-cycle) become four times more likely to occur.

“In other words, modern technological advancement coincided with a period of weak solar activity and the sun is expected to become more active in the near future,” the study stated.

This means that the modern internet infrastructure we’ve developed over the last few decades has never been tested by strong solar activity.

WHAT IS A SOLAR SUPERSTORM?

Also known as a geomagnetic storm, a solar superstorm is what happens when something called a coronal mass ejection (CME) escapes the sun and strikes the Earth.

Large portions of the sun’s outer layer, the corona, can be blown off into space due to changes in the sun’s magnetic fields. These clouds of magnetized particles and superheated gas can reach the Earth in anywhere from a day to four or five days.

We know this because it’s happened before — just never in the age of the internet.

The first recorded CME to greatly impact Earth was in 1859. Known as the Carrington event, it caused large-scale telegraph outages in North America and Europe, with equipment fires and electric shocks to telegram operators reported across the globe.

The CME that caused it was travelling so fast it reached the Earth in only 17.6 hours, and scientists have theorized in the past that if such an event struck us today, it could knock out power for 20-40 million people in the U.S. alone for up to two years.

The strongest CME of the past century was in 1921. But smaller CMEs have impacted us since, including one that knocked out the power grid in Quebec in 1989, plunging the entire province into darkness.

Just when the next big CME could be isn’t certain. The study stated that this next solar cycle is on track to have between 210 and 260 sunspots at the height of the sun’s cycle, which is twice the amount that occurred at the peak in the last cycle. CMEs originate near sunspots, so this can be a predictor for the strength and likelihood of a CME.

The new study pointed out that in the last Gleissberg cycle, its minimum was in 1910, and a huge CME occurred just over a decade later. Since we’re coming out of a period of minimum solar activity, we should be on the alert.

“Given that a strong solar cycle that can produce a Carrington-scale event can occur in the next couple of decades, we need to prepare our infrastructure now for a potential catastrophic event,” the study stated.

WHAT IS AT RISK?

The study looked at the physical infrastructure that could be at risk, from cable networks to data centers, to the location of more than 46,000,000 internet routers.

A big threat during solar superstorms is geomagnetically induced currents (GIC) that flow through ground-based power grids and systems, putting these at risk as well as oil and gas pipelines and networking cables.

The real worry is how these would affect long-distance cables.

While long-distance cables that carry signals in optical fibres are not at a risk from GICs because there is no actual electric current in them, conductors that accompany them to power repeaters, called power feeding lines, are at risk.

Submarine cables, which are laid in the sea to carry telecommunication signals, have never been stress-tested by a strong solar event. These undersea cables keep our global internet going, carrying almost all of our communications.

“During catastrophic events with a large probability of repeater failure, at an inter-repeater distance of 150 km, nearly 80 per cent of undersea cables will be affected, leaving an equal fraction of endpoints unreachable, whereas 52 per cent of cables and 17 per cent of nodes in the U.S. land network are affected,” the study predicted.

Satellites are also at risk during solar superstorms, not because of electric currents caused by the magnetic fields interfacing, but because of coming into contact with the supercharged particles themselves.

“Both surface-based and satellite-based communication systems are under high risk of collapse if a Carrington-scale event occurs again,” the study pointed out.

The study looked at the weak points of physical infrastructure across the globe in order to estimate what could happen in best and worst case scenarios in different countries.

Assuming there’s only low failure of long-distance cables, in the U.S., most cables connected to Oregon would fail, and connectivity to Canada and Europe would fail completely.

In China, while more than half of their connections would be unaffected, Shanghai would lose all of its long-distance connectivity.

“The U.S. is one of the most vulnerable locations with a high risk of disconnection from Europe during extreme solar events,” the study said. “Intracontinental connections in Europe are at a lower risk due to the presence of a large number of shorter land and submarine cables interconnecting the continent.”

“Owing to the limited geographic spread of data centers, Facebook will have less resilience in the event of solar superstorms,” the study said.

But although this all sounds scary, we have time to start the process of bolstering our infrastructure.

The study recommended we strengthen our infrastructure by doing things like laying more cables to minimize the risk of being completely cut off.

“Since links from the U.S. and Canada to Europe and Asia are highly vulnerable, adding more links to Central and South America can help in maintaining global connectivity,” the study suggested.

Planning for future data centres to be more spread out across the globe instead of clustered in northern parts of Europe and North America will also help keep the world connected in the event of a solar superstorm.

Spacecraft currently will only be able to give us 13 hours of warning if a huge CME were heading our way, the study stated. Hopefully we would’ve predicted it before then, but that’s the window in which we could be certain one was on the way.

The study suggested that in anticipation of this, we could devise a shutdown strategy to be enacted globally, that would allow us to minimize connectivity loss after the geomagnetic storm. Power grids would need to reduce or shut down completely during the storm.

In terms of internet infrastructure, we need to figure out how to protect equipment during the solar storm, and figure out how to keep service going if there is damage afterwards. Part of that is designing things that have been tested for how they would function in the event of large-scale failures, something that currently isn’t part of resilience evaluation.

“We need to rethink the network environment in the event of a partial or complete disconnection,” the study stated.

Designing a backup system that could patch together available modes of communication, using cables, satellite and wireless, could help keep things going.

It might require a lot of rethinking how we keep the world connected. But if we want the Internet Age to continue running smoothly, it might be necessary to start protecting it from the sun’s future wrath.