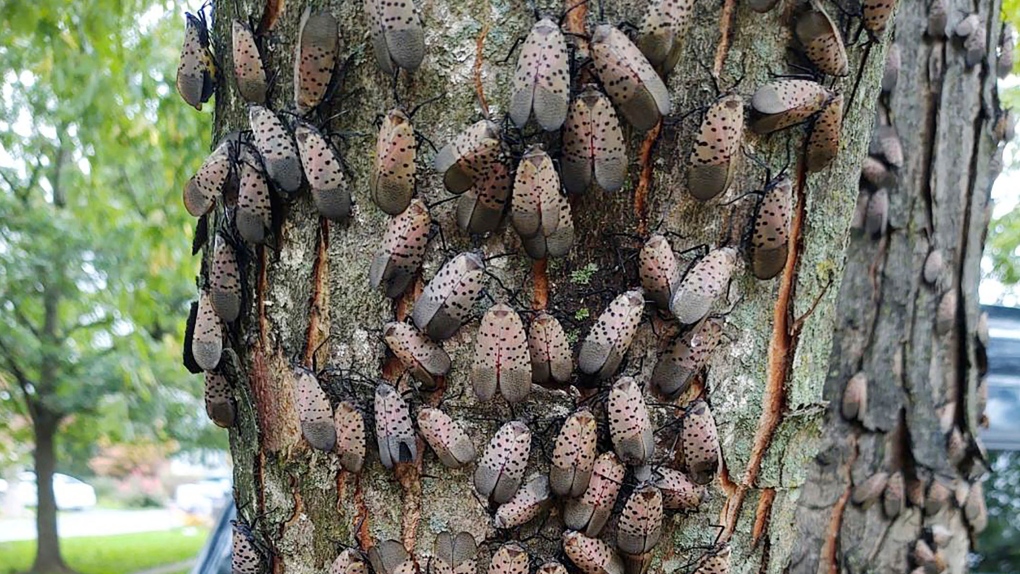 This Oct. 10, 2021 photo shows a cluster of spotted laternflies on a tree, in Harrisburg, Pa. (Scott Eshenaur via AP)
OTTAWA -

The spotted lanternfly is a pest native to China that has been making inroads in the United States since 2014.

Thus far, the small grey-and-red insect with spotted wings has not been found alive in Canada.

But in early September, hundreds of adults were found in a residential area in Buffalo, N.Y., just 45 km away from the Canadian border.

The reports set off alarms at the CFIA, which in a tweet last week asked Canadians to report any sightings of the pest on this side of the border "immediately."

The insect feeds on sap, mainly from fruit trees, and can cause serious harm to orchards and vineyards.

"We're becoming more and more concerned about the proximity to Canada, and particularly our grape-growing industries, because this is a pest that has had significant impacts on the grape and fruit industry in the United States," said Diana Mooij, a specialist in the invasive alien species program within the CFIA.

The first North American sighting of the pest was in Pennsylvania in 2014, and since then, a tracking program monitored by Cornell University has documented the pest in 14 U.S. states.

Pennsylvania, New Jersey, Maryland and Delaware have the most sightings, along with areas in and around New York City. It has been found as far east as Rhode Island, as far south as North Carolina and as far west as Indiana.

The Buffalo sightings were the first to occur near the Canadian border.

Mooij says dead adults have been found on trucks in Canada. She says females lay their eggs on almost anything that is stored outside.

"This is a pest that unfortunately can travel on all kinds of things," she said. "It doesn't just travel on plants, it can travel on shipping containers and trucks and cars and camping gear.

"We're asking everybody to have some increased vigilance in looking for this pest, particularly if they've been to areas in the United States where the pest is found," she said.

The insects produce a sugary waste known as "honeydew" that attracts pollinators like bees and wasps and can cause fungi and mould to grow on trees, which can damage them.

Pennsylvania says an analysis in 2019 showed the insect could cause more than US$300 million damage to its economy annually.

This report by The Canadian Press was first published Sept. 26, 2022.