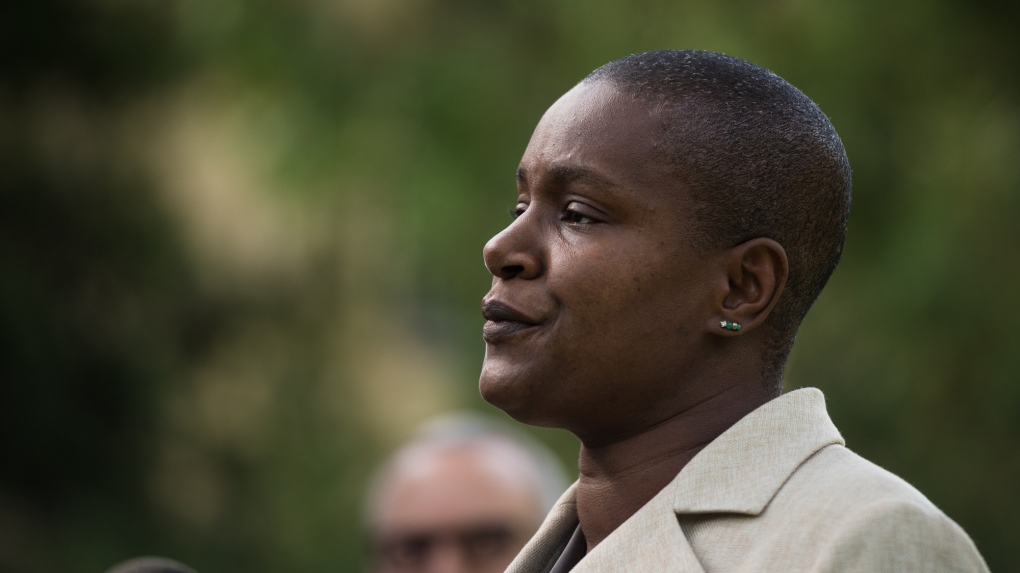 Annamie Paul speaks to the media during a press conference announcing she is officially stepping down as Green Party leader, at Suydam Park in Toronto on Monday, September 27, 2021. THE CANADIAN PRESS/ Tijana Martin

OTTAWA -- Green Party executives have opted to drop a legal challenge against their leader that brought tensions between senior officials and Annamie Paul to a boil last summer.

Two senior party members who were not authorized to speak publicly on the matter say members of the federal council and the Green Party of Canada Fund met over the past week to call off their court action.

Paul launched an arbitration last summer related to her employment contract and moves by party brass to oust her through a non-confidence vote and a membership suspension -- both were halted by the independent arbitrator.

In response, several senior officials filed a legal challenge on behalf of the party against Paul that questioned the arbitrator's decision.

The disputes have added to the party's financial woes, which Green executives cited afterthey laid off more than half their staff this week and continued to hold out on the compensation Paul is seeking for her legal fees.

Paul still occupies the leader's chair -- a spot that gives her some leverage in ongoing legal wrangling -- after announcing last month she would step down following an election that returned two Greens to the House of Commons but saw the party's share of the popular vote tumble to two per cent following months of internal strife.The party ran only 252 candidates in the country's 338 seats.

The Green Party declined to comment on the court action.Paul's office did not respond to a request for comment.

In an email blast to membership obtained by The Canadian Press, Green Party president Lorraine Rekmans said its finances need to find a "sustainable footing." That need prompted the layoff of 11 core staffers this week, she wrote Tuesday.

"The decision to lay off so many of our long-serving staff has been very difficult," Rekmans said in the statement.

Greens face a "financial crisis," said John Willson and Corrina Serda, co-presidents of the party's fund -- treasurer for the federal council, which is the Greens' main governing body. The party has been running large monthly deficits since February, they said in the email blast.

The party is now refocusing staff on fundraising as well as "member re-engagement" and finance and IT support, the fund heads said, while communications and mobilization take a back seat following the election on Sept. 20.

Greens raised about $1.36 million in the first two quarters of 2021 compared to about $1.2 million in the same period a year earlier -- before Paul took the helm in October 2020 -- according to Elections Canada filings.