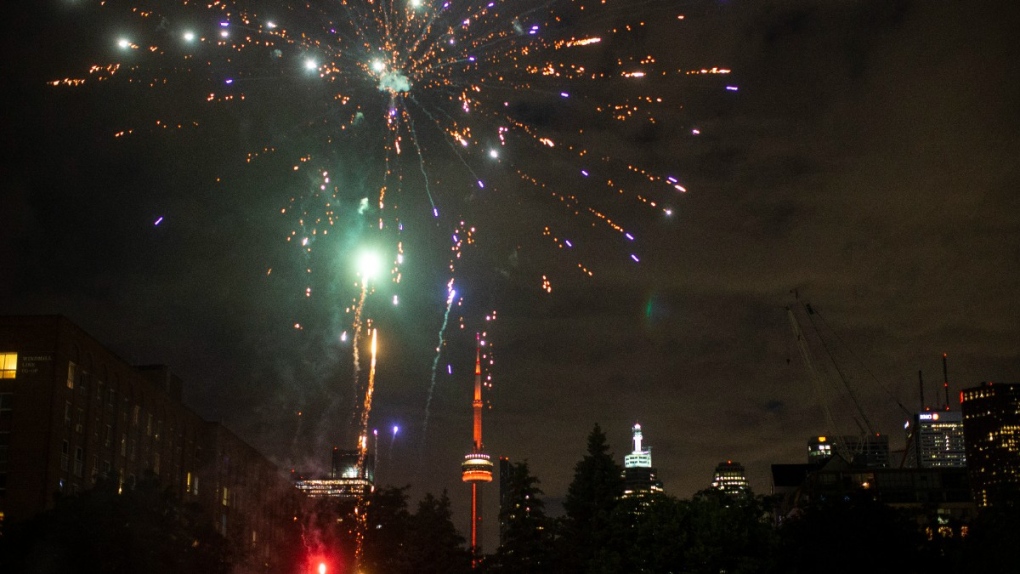 A neighbourhood Canada Day fireworks display is seen in a Toronto park, July 1, 2021, as the CN Tower is lit orange in solidarity and support of Indigenous communities across Canada. THE CANADIAN PRESS/Chris Young

It isn't quite Canada Day without fireworks.

This Friday, Canadians across the country will celebrate the national holiday with public fireworks displays in their towns and cities, as well as in their backyards alongside family and friends.

But when and where are you allowed to shoot off fireworks in Canada? Ultimately, it depends on where you live.

And with thousands of municipalities in Canada, each may have slightly different rules.

"Some have rules governing the use of them up until a certain time in the evening, ensuring that they are not being done in local parks or wilderness areas, or near rivers or streams or bodies of water, and it's really important to know the law."

Displaying fireworks or special effect pyrotechnics requires certification from Natural Resources Canada. A certificate isn't required for consumer fireworks, but the federal government advises Canadians to check with their local municipality, and potentially their province, on what the rules are.

Municipal bylaws generally cover the time, days and locations that consumer fireworks can be used.

The City of Toronto, for example, allows fireworks on private property until 11 p.m. on two days only — Victoria Day and Canada Day — with a permit required on all other days. Fireworks are also banned in parks and beaches.

A municipality may suspend the use of fireworks in the event of a fire ban as a matter of safety.

Others have gone a step further and prohibited them altogether.

The City of Vancouver banned the sale and use of fireworks in 2020, although they continue to be used, most notably last Halloween.

Other municipalities are also considering bans of their own.

Kanji says in areas where fireworks are allowed, the key is to "know the law, follow the rules and be a good neighbour."

With the Fourth of July holiday also approaching in the United States, The Associated Press reports that some western cities are cancelling their fireworks displays due to dry weather, pandemic-related supply challenges and staffing problems.

Kanji says he isn't aware of any Canada Day displays being cancelled due to shortages but that demand for fireworks did increase during much of the COVID-19 pandemic.

He also says the industry is not immune to supply chain constraints and staffing shortages, but that Canadians are encouraged to stock up as early as possible leading up to celebrations like Canada Day or others such as Diwali, or the Festival of Lights, and Lunar New Year.