Around a third of seniors living at home are at risk of not getting adequate nutrition, which could lead to a number of health problems, a new report from Statistics Canada finds.

The study is among the first to look at how many seniors in Canada are at risk of malnourishment.

The authors say identifying such seniors is key to helping them avoid falls,  hospitalization, institutionalization and even death.

The study was based on the responses of more than 15,000 Canadians over the age of 65 who took part in the Healthy Aging arm of Statistics Canada’s Canadian Community Health Survey.

The researchers asked the seniors about their cooking and eating habits, their nutritional intake, as well as about changes to their health and weight.

They found that 34 per cent of the seniors taking the survey were at nutritional risk.

The two main factors that put seniors at risk were: gaining or losing more than 10 pounds (4.5 kg) in the past six months; and reporting that they skipped meals “almost every day.”

Other factors that increased the risk were:

While women age 75 or older were somewhat more likely to be at nutritional risk than women aged 65 to 74, “when other factors were taken into account, advancing age was actually associated with lower odds of nutritional risk among women,” the authors report.

The authors speculate that this counterintuitive finding is likely a reflection of the fact that the older women they surveyed were healthy enough to continue to live in private households.

Seniors who were active socially outside the home had a lower risk of malnutrition, the report found.

“Anything less than weekly participation in social activities such as religious services, sports or volunteer activities was associated with a higher likelihood of nutritional risk,” the authors said. “In addition, people who lacked someone to support them in practical matters such as help with meals or chores were more likely to be at risk.”

Susan Doyle, executive director of Downsview Services for Seniors in Toronto, said her agency, which includes a meal delivery program, suspects malnutrition among seniors is under-reported.

Eighty per cent of the agency’s clients have some sort of nutrition problem, she said, including half who do not have proper access to food.

“They can go a week or weeks without a hot meal and they live on a senior’s diet, which is soup, which is loaded with salt and not healthy at all,” Doyle told CTV News.

Doyle said when seniors lack adequate nutrition, they end up in emergency rooms “with a host of problems,” including diabetes, chronic pain issues and poor balance.

“They become socially isolated and depressed, and they are not motivated to eat anymore,” she said.

Perhaps not surprisingly, 62 per cent of depressed seniors were at risk -- much higher than seniors who weren't suffering from depression (33 per cent).

As well, the more types of medications seniors used every day, the more likely they were to be at nutritional risk. 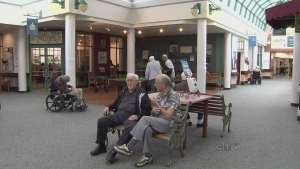