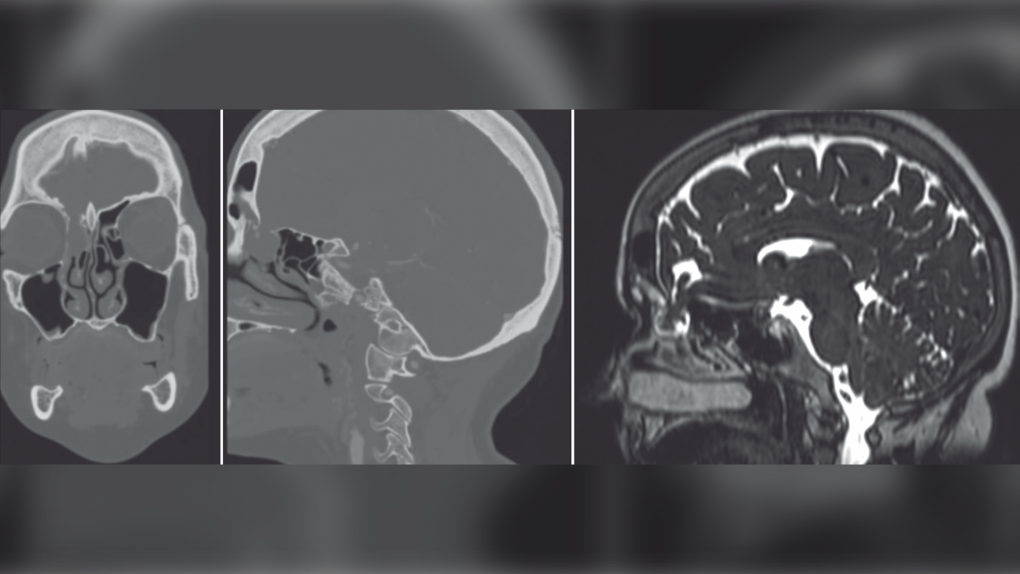 A woman started leaking cerebral fluid out of her nose after she received a COVID-19 test administered with a nasal swab, according to a new case report. (JAMA Otolaryngology/University of Iowa Hospitals and Clinics)

TORONTO -- A woman with an undiagnosed skull defect started leaking cerebral fluid out of her nose after she received a COVID-19 test administered with a nasal swab, according to a new case report.

For the patient, a woman in her 40s, it started with a COVID-19 test ahead of an elective hernia surgery. The test was done using a nasal swab that reached deep into the nasal cavity, a common form of testing for COVID-19.

Afterwards, she developed a runny nose in both nostrils, a metallic taste in her mouth, a headache, neck stiffness, and a sensitivity to light, as well as vomiting.

To figure out what was going on, doctors inserted a flexible tube called a scope into the patient's nose. They discovered a mass inside the nose, but not what was causing the fluid leakage.

A CT scan identified a 1.8-centimetre sac-like structure protruding down into the nasal cavity between a breakage in bone. It was an encephalocele -- a term for a condition usually identified in infants, where the bones of the skull do not fuse completely, creating a gap where cerebral fluids and brain tissue can collect in a protruding lump.

Doctors believe the nasal swab damaged this mass within the nose, causing the leakage of cerebrospinal fluid.

When a CSF leak occurs, it's because something has created a tear or hole in the connective tissue that keeps the CSF surrounding the brain and spine. If too much fluid leaks out, the brain sags inside the head, putting pressure on parts of the skull and causing headaches, a condition known as spontaneous intracranial hypotension.

CSF leaks are rare, but are sometimes misdiagnosed as migraines or other headache disorders, according to Spinal CSF Leak Canada.

When doctors compared their results to a CT scan the patient previously had done in 2017, they found that the encephalocele had existed back then, but was misdiagnosed as paranasal sinus disease, or an inflammation of the sinuses.

The woman also had a medical history of idiopathic intracranial hypertension, which is related to high pressure in the brain due to a buildup of CSF.

And more than 20 years earlier, she had nasal polyps removed, which are soft, noncancerous masses that develop and hang down in the nasal passageway. They can sometimes impact a person's breathing or encourage infections, and thus may need to be removed.

The real problem — the breakage in the skull itself — had gone undiagnosed for years.

As soon as the true problem was identified, doctors operated in order to reduce the mass. To close the hole in the bone that had allowed the sac-like protrusion to form, they used a soft tissue skin graft, which serves as a scaffold for cells to incorporate the graft into the bone.

"To our knowledge, this is the first report of an iatrogenic CSF leak after a nasal swab for COVID-19," the case report stated.

The report added that surgical trauma is the cause for CSF leaks up to 58 per cent of the time, but stressed that the swab itself had not caused the hole in the patient's bone.

"This patient had an undiagnosed skull base defect at the fovea ethmoidalis that was present on imaging dating back to 2017," the report continued. "We therefore theorize that the swab itself did not result in a violation of the bony skull base, but rather the invasive test caused trauma to the patient's preexisting encephalocele."

The report noted that it is common to screen patients for COVID-19 before they get non-related surgeries, and also that COVID-19 tests with nasal swabs are increasingly common in the United States.

They suggested that alternative testing methods than nasal swabs be used for patients with a history of sinus issues or skull base defects.