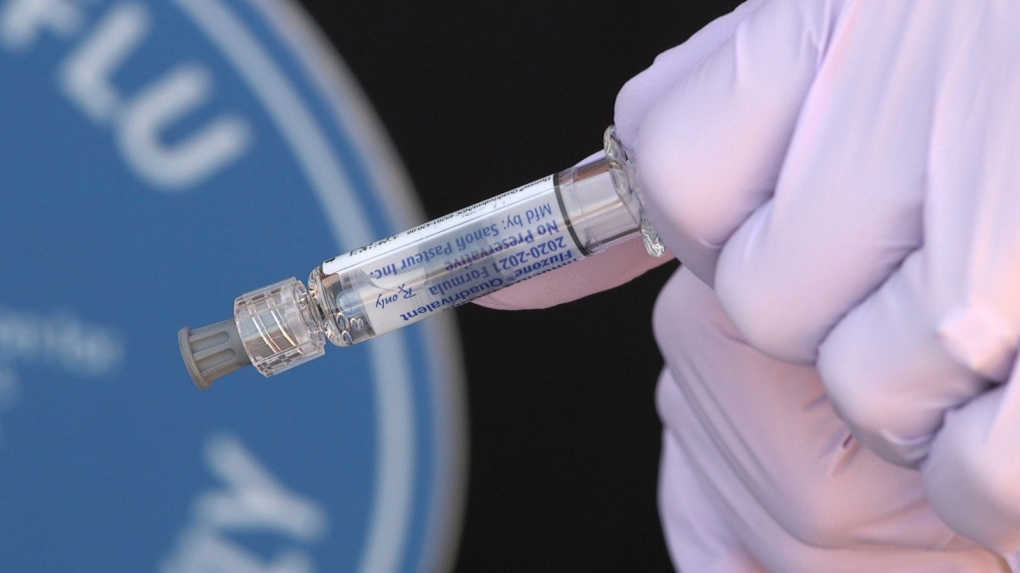 A flu vaccine is prepared to give to National Foundation for Infectious Diseases (NFID) staff members in Bethesda, Md., on Wednesday, Sept. 30, 2020. (AP Photo/Federica Narancio)

TORONTO -- Even if a COVID-19 vaccine is found soon, it could still take a while for life to return to normal, according to new research from the United Kingdom that highlights a series of potential problems that could prolong the pandemic.

The report, issued by the Royal Society, a scientific body in the U.K., delves into the timeline of vaccine production and serves as a reality check on a series of “enormous” problems researchers predict in terms of making and delivering the potentially life-saving doses.

It will take time for researchers to determine whether or not a vaccine candidate offers long-term protection, and long-term studies will be necessary to confirm whether the vaccine actually lasts, or if additional doses or boosters are needed.

Scientists racing to find a vaccine will also need to carefully study safety, and it’s possible that cases of harmful side effects could emerge and potentially cast public doubt on the vaccine. Those cases could also become fodder for anti-vaxxer groups who already oppose the vaccine, and researchers say “clear messaging to target groups” will be necessary to ensure public trust.

“Rare adverse events or limited effectiveness in the field may only come to light when very large numbers of people are vaccinated,” researchers wrote.

Hundreds of vaccine candidates are being tested globally, and at least nine have reached stage three, meaning they’re in the final step as scientists study whether the vaccines can stop the virus from infecting the body.

And while researchers with the Royal Society say it’s possible that a successful vaccine could be available as soon as next spring, they describe these vaccines as “the first generation” and warn that they may be “suboptimal.”

It’s also possible that, due to incredible demand and various global outbreaks, certain countries could be prioritized over others in the beginning.

When a vaccine is deemed safe and effective, manufacturers will need to rapidly scale up production capacities to meet international demand. Such a feat won’t be achieved overnight, and it’s possible that only certain groups will be supplied the vaccine to start. At the same time, manufacturing will still need to meet demand for other vaccines.

What the vaccine is actually made of will come into play, and the scale of manufacturing will depend on the ingredients involved, the number of doses needed and how long it takes to make.

"Production may be limited by supply chains of materials and delivery systems,” researchers wrote.

Even after a vaccine is ready to go and manufacturing is meeting unprecedented demands, researchers say the most important hurdle could come as health-care workers try to administer the vaccine to the general population. They say the solution will require an all-hands-on-deck approach.

“To address this administration challenge, additional staff will need to be trained (e.g. pharmacists, midwives, physiotherapists, dentists and vets) to immunise the population rapidly and safely,” researchers wrote.

Accounting for existing health care inequalities will be important when delivering the vaccine to marginalized groups, researchers say. Other studies have suggested that racialized groups in the U.S. and the U.K., particularly the Black community, are more likely than white people to become infected and suffer severe consequences of the virus. A new report from the University of Toronto suggests that Indigenous, Black and South Asian Canadians are significantly more at risk than white Canadians of having multiple pre-existing conditions that put them at greater risk of complications or death from COVID-19.

Because of this, researchers say officials must be clear which groups are being prioritized to receive the vaccine earlier than others and why.

“There should be public dialogue and engagement to manage expectations and understanding of vaccine effectiveness, safety, side effects, availability and access,” they wrote.

Little is known about when a vaccine will be ready. A new survey of 28 experts in vaccinology led by researchers at the University of McGill found that most experts believe it’s unlikely that a vaccine will be ready by early 2021, as some U.S. officials have predicted. Instead, they say the summer of 2021 is the earliest “best case scenario,” while others believe it will take until 2022.

Similar to the Royal Society report, the researchers agreed that there could be some false starts before a successful vaccine is found.

“The experts we surveyed believe that there is a 1 in 3 chance that the vaccine will receive a safety warning label after approval, and a 4 in 10 chance that the first large field study will not report efficacy,” said postdoctoral fellow Patrick Kane, the report’s lead author, in a statement.

Canada’s second wave of COVID-19 has already begun, a trend that researchers and public health authorities have been predicting for months. As of Thursday, more than 160,000 people in Canada have tested positive for COVID-19 and at least 9.318 have died.