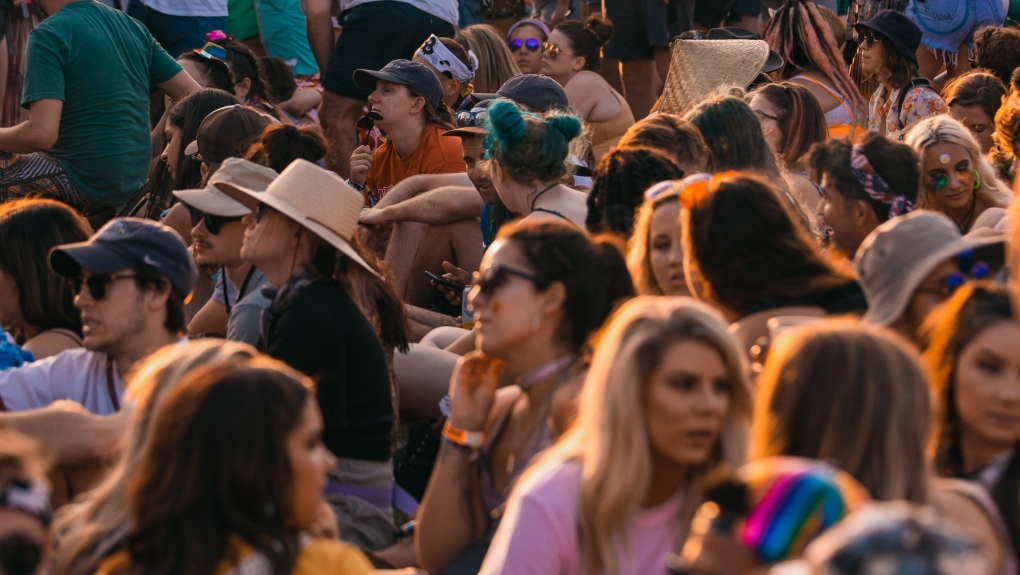 People gather at an outdoor concert in this undated stock image. (Pexels)

TORONTO -- For months, public health officials have urged people to avoid large crowds while headlines demonstrated the consequences of disobeying that advice, such as the Toronto-area wedding linked to 23 new COVID-19 cases or the outdoor barbecue involving 40 people in Ottawa that lead to 27 new cases.

This connection between crowds and the virus’ spread has become so entrenched in the public psyche that just the sight of a large group can cause fear, anxiety, and even disgust in some people, experts say.

“It’s a threat now. Being in a crowd has now been associated with risk for COVID,” Danielle Rice, a PhD candidate in clinical psychology at McGill University, told CTVNews.ca during a telephone interview on Thursday.

“A big recommendation is to avoid crowds and big gatherings so we’ve now associated that with some fear.”

While most people wouldn’t have thought twice about joining a large gathering in pre-pandemic times, Rice said the persistent messaging about crowds has changed that.

“The crowds seem ambiguous, new, unpredictable, and a threat to what people think of us if we’re seen in crowds, or if we were to pick up COVID from crowds, and that mix together is really a recipe for some anxiety and worry.”

Steve Joordens, a psychology professor in the department of cognitive neuroscience at the University of Toronto, connected those feelings of disgust among certain people to what he called “aversion learning” or “single-trial learning.”

He said people are biologically wired to learn about stimuli associated with disgust or sickness very quickly. As an example of single-trial learning, Joordens provided the fictional scenario of someone becoming sick after eating a brussel sprout.

“For some reason, you become very ill, it may have nothing to do with the brussel sprouts, but because of our aversion to illness and sickness, we often will find ourselves not wanting to touch a brussel sprout for a long, long time,” he told CTVNews.ca during a telephone interview on Thursday. “Whatever we ate, just before we got sick, whatever we drank, that quickly becomes associated with disgust and we avoid it.”

In the case of a large crowd, Joordens said people have come to associate others as being potentially infectious in the sense that they may have coronavirus and they may be able to spread it to them and their families. Because of this, they may develop an aversion to being around other people, similar to the experience with the brussel sprouts.

“I think we very quickly learn to try to avoid them, we can’t always do that easily or gracefully, and so that’s what makes it sort of an anxiety situation,” he explained. “We start wanting just to be in places where there are not other people, so that we don't have to face all that.”

HOW LONG WILL PEOPLE FEEL THIS WAY?

Rice said it’s impossible to predict how long these feelings of anxiety or disgust will last because the experience will be different for everyone and no one knows how long the pandemic will go on for and when it will be safe to gather in large groups again.

However, she said humans are generally very resilient and adaptable.

“Typically, we’re able to sort of shift and adapt to what’s happening. So that would mean that when things get a little bit better, based on what we know about humans being so resilient, we hopefully will be able to tone down that anxiety and that fear,” she said.

That toning down won’t happen overnight though, according to Rice. She said she expects it to be a gradual experience where people’s anxieties over crowds will diminish over time.

“We know with anxiety, the more we expose ourselves and notice that we are safe and we are OK, and that threat is perhaps gone, the anxiety should decrease over time,” she said. “That’s how anxiety generally works.”

Joordens agreed that it may take some time for people to adjust to congregating in large groups once it’s safe to do so again.

“Post-COVID, we’re going see people having smaller social circles, more hesitancy about strangers, less of a desire to be in places where there’s a ton of people, including a lot of people we don’t know,” he said.

Despite this, Joordens said people will still seek out that human connection, but they may do so in smaller gatherings because the aversion to crowds may linger for some time after the pandemic.

“We all crave, at some level, that pre-COVID kind of experience. It's just a question of how much these anxieties and such hold us back,” he said.

As the pandemic continues, both Rice and Joordens said there are things people can do to ease their feelings of anxiety, fear, and disgust when they encounter large groups.

Rice said people can try to practice “thought shifting,” which involves reminding themselves that the feelings they’re experiencing are only temporary. She also said they can try developing a coping plan that incorporates daily breathing or meditation exercises and mantras they can repeat to themselves.

Rice added that people should assess their risk to the virus and if they’re at a higher risk, acknowledge and accept that it might be a more frightening time for them.

“For them, it’s OK to accept that right now ‘I’m going to feel anxious and I'm going to avoid crowds, because it makes the most sense for me personally,’” she said.

Joordens said people can learn to control and manage their anxieties through the use of guided relaxation techniques, which are available online.

“You can basically summon relaxation, you can learn how to summon a relaxed feeling over your body and that relaxation can push out the anxiety,” he said.

More generally, Joordens said people should try to pay attention to the effect certain stimuli have on their mental state. For example, if they’re watching the news for a long time, they should take stock of how they feel afterwards.

If they’re feeling stressed or anxious after watching the news, they can try to budget their daily consumption. He also suggested finding activities or hobbies that allow them to completely forget about the pandemic.

“I call it a cognitive palate cleanser,” he said. “So if you watch the news, go ahead and watch the news, get your information, but then follow it up with an activity that kind of pushes that news out of your mind and puts your mind in a better place.”

After restrictions have been lifted and it’s safe to gather in crowds again, Rice said people should attempt to “walk into the fear” if they’re still feeling anxious for a long time.

“We call it opposite action,” she said. “As much as you feel afraid and scared and you want to avoid [the crowds], the recommendation is to walk towards your fear and try to notice that it’s actually safe now and getting that exposure experience.”