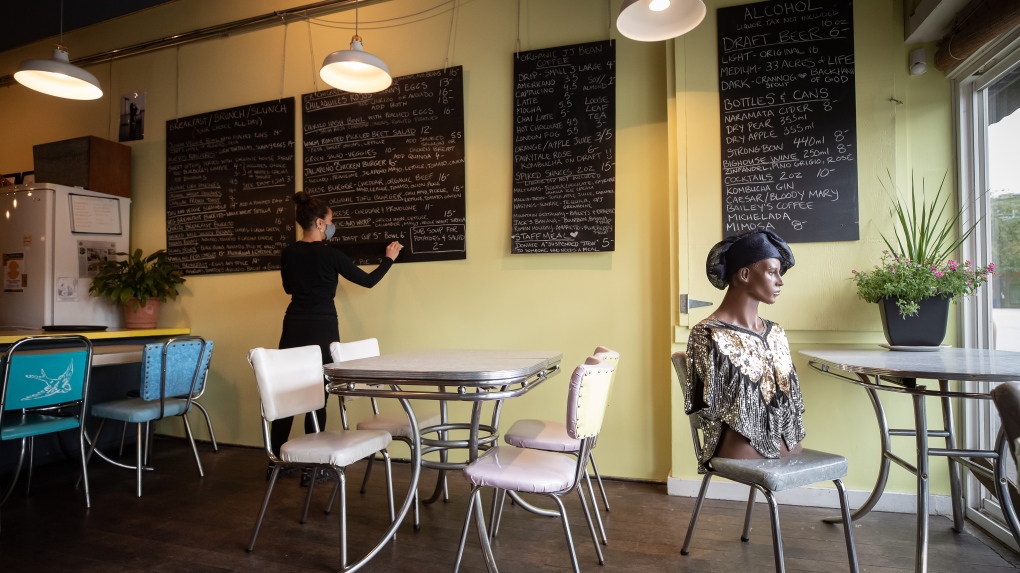 A mannequin is used to block off a seat at Roundel Cafe to help diners adhere to physical distancing guidelines, as owner Dena Sananin removes an item from the menu board during brunch service in Vancouver, on Sunday, June 14, 2020. THE CANADIAN PRESS/Darryl Dyck

HALIFAX -- The menu at the Stubborn Goat Gastropub in downtown Halifax will always have a classic burger and gourmet mac n' cheese.

But the slightly more eccentric dishes, peppered with unique ingredients, might be harder to come by these days.

"We reduced the size of our menus right across the board," says Joe McGuinness, co-owner of Legendary Hospitality, which operates three restaurants in the coastal city.

"We took the best of the best and put it on the menu."

It's part of a trend at restaurants across the country.

In a bid to survive the second wave, eateries are pandemic-proofing their menus by offering customers top sellers while deleting the less popular items for now.

"Less is more on menus is a good idea right now," says Martin Vezina, a spokesman for the Quebec Restaurant Association.

"Restaurants are figuring out what they do well, and what works for delivery, and cutting the rest."

It's not a panacea. Restaurateurs are tinkering with nearly every facet of their operations in an effort to stay afloat, including operating hours, staffing levels, delivery packaging, contactless payment systems, website upgrades, patio enclosures and the installation of Plexiglas dividers. Other changes include grocery sales and the retrofitting of bathrooms with touchless toilets and faucets.

"There's not a magic bullet," says Luc Erjavec, Atlantic Canada vice-president with Restaurants Canada. "It's about doing a number of things differently to survive."

Yet changes to menus are among the most visible ways eateries are adapting to the pandemic.

While generally based on the popularity of a dish, menu edits are also influenced by what travels well for take out and delivery -- the sole source of revenue for restaurants in regions where indoor dining is off limits.

"During the lockdown, we did remove items from our menu that didn't make sense to offer for delivery," says Dan Joseph, owner of Darrell's Restaurant in Halifax.

"Like lasagna, for example, that's not something that people will order much for delivery ΓÇª it doesn't hold up particularly well."

Indeed, Darrell's is credited by some as getting food delivery down to a science.

Joseph says the restaurant is currently testing three paper bags. He says they don't "sweat" like a plastic bag, and can be stapled shut to ensure they aren't tampered with by a driver.

""We want to make sure we get it right," he says. "Once that bag is in place, it's foolproof."

Smaller menus have additional benefits, including lower inventory levels in kitchens, which reduces potential losses in the event another full lockdown is ordered.

"You want to reduce your inventory because that was one of the significant losses that hit all restaurants back in March," McGuinness says. "We discarded tens of thousands of dollars of inventory."

Still, even though restaurants are streamlining menus to curb costs, diners may not always notice.

Meagan Andrews, the head chef at the Stubborn Goat, says the menu was designed so ingredients could be used in several meals.

"Our menu still looks big, but if you look closely a lot of the ingredients are used in multiple dishes," she says. "For example, half the ingredients in a mac n' cheese might be used on a pizza, and that cuts down on our inventory and prep time."

The chef was also inspired by the mood of the pandemic when developing the menu.

"When we reopened after the lockdown, we took the opportunity to take comfort classic dishes and recreate them," Andrews says. "People want something they're familiar with, but elevated in creative way."

Meanwhile, it's not just the menu selection that's been altered at the restaurant, but the medium of the menu itself.

Rather than receive a physical menu when you sit down, the eatery's tables are equipped with a type of bar-code called a QR code.

"You scan the QR code on your phone, and the menu pops up," McGuinness says. "We don't want people touching a menu and then passing it on to somebody else. This eliminates the need to wipe down shared menus or print new menus."

Yet while many restaurants are trying new things to survive the pandemic, Erjavec with Restaurants Canada says it remains a work in progress.

"This is unchartered territory and things are still changing every day," he says. "Restaurants are using a lot of trial and error to survive."

This report by The Canadian Press was first published Nov. 20, 2020.