OTTAWA -- Canada is far from flattening the COVID-19 curve, and the severity of the pandemic has now far surpassed the peak of infections during the first wave of the national health crisis, prompting Prime Minister Justin Trudeau to implore Canadians to “really tighten up” their precautions and stay home as much as they can.

“It’s the future of our country” that’s at stake, Trudeau said Friday, speaking to the nation once again from outside of Rideau Cottage, resuming what was a nearly daily routine during the first five months of the pandemic as the country battled, and ultimately flattened the first wave.

Now, new national modelling shows that Canada on track to see thousands of new cases and hundreds of new deaths in the days and weeks ahead.

“We’re really at risk of seeing caseloads go up and hospitals get overwhelmed, and more loved ones dying. So we need to do everything we can, right now, to slow the spread of COVID-19, to stop this spike in its tracks,” he continued.

Chief Public Health Officer Dr. Theresa Tam said Friday in presenting the new projections that there’s “urgency” to get the situation under control.

“The national epidemic curve shows that case counts have far surpassed peak levels seen during the first wave,” Tam said. “An average of about 4,800 cases are now being reported daily. Moreover, epidemic growth is continuing at rapid pace, and about 15 per cent more daily cases are reported this week, compared to the last.”

Trudeau used his national address to plead with Canadians to shake off their COVID-19 fatigue and frustration about being back in a place where hospital capacity could soon be overwhelmed, and do their part.

Noting the added pressure on health-care workers and essential staff who have been on front lines for almost 10 months working long hours at risk to themselves and their families, Trudeau sought to pull people together to help them out.

“They’re tired. They have been heroes, they have been going above and beyond anything they might have thought they were signing up for. We need to help them,”

The prime minister said if Canadians are thinking about seeing friends, or attending a dinner party this weekend, don’t. Noting the frustration many have over seeing people not pulling their weight, Trudeau said even after making so many sacrifices this year, Canadians need to hang in there for “another few months.”

The projections also indicate that, even under current rates of contacts, into December the country could be recording 20,000 cases a day. In order to drop the rate of spread enough to begin slowing the epidemic’s growth, Canadians need to reduce their number of contacts and stay home as much as possible, Health Minister Patty Hajdu said on Friday.

“Think about the choices that you're making carefully, because lives actually depend on it: Is my travel essential? Do I need to go out today? Can I reduce my shopping time? Do I need to have that dinner? This will be especially hard as holiday season approaches, but I know that we can be creative in the way that we stay connected more safely,” she said, noting as well that the federal government has been building up capacity to help provinces with surge demands such as hospital overcapacity, which is becoming a reality in some areas.

The modelling shows that instead of flattening the curve, national daily case counts are “increasing significantly,” and rapid growth is occurring in several provinces because each new case in Canada is spreading the infection to more than one other person.

“The vast majority of Canadians remain susceptible to infection… There is urgency to quickly bring infection rates down across the country,” Tam said.

Based on the modelling presentation prepared by the Public Health Agency of Canada, more high-risk adults and seniors are contracting the virus at higher rates; the number and size of outbreaks are increasing, including in long-term care homes and Indigenous communities; and hospitalizations and deaths are increasing.

“Keep to your household. Household doesn’t mean your university student son who is living somewhere else, household means the people that you’ve been living with in the last 14 days. Keep to those right now, because that is going to reduce the contact rates substantially,” Tam said.

Trudeau renewed his plea for people to stay home by doing that himself. He plans to work from home as much as possible, and will address Canadians again from the front steps of his home next week.

He is encouraging employers to make arrangements to have employees work from home once again, and highlighted the latest round of COVID-19 aid that has just passed Parliament.

Through Bill C-9, the federal wage subsidy program has been extended until June, and a new direct-to-tenant rental subsidy is launching. It will see the federal government cover up to 65 per cent of rent for small businesses affected by COVID-19, and if that business is facing a public health lockdown order, the government is providing an additional 25 per cent subsidy. Applications open for this new program on Monday.

Facing questions over the last few weeks about whether it’s time for national intervention after imploring premiers to “do the right thing” and implement shut downs in hard-hit regions, Trudeau has said the federal government is ready to help provide whatever supports are required, but warned those resources are limited.

However, as the latest modelling presentation reads: “A stronger response is needed now to slow the spread of COVID-19.” It’s a message that has been shared over the last few modelling updates, indicating the public health measures and restrictions taken so far, are not making enough of an impact.

Trudeau said that some premiers and mayors have been making hard decisions to shut down, which he supports, but “all orders of government must come together to slow the spread of this virus.”

Trudeau is now advocating that: “Going in to lockdown and supporting businesses while we’re in that lockdown is a better way of ensuring their success in a few months, in a few years, than trying to tough through a virus that is running around unchecked.”

Like many countries around the world, the second wave is hitting Canada harder than the first wave and while “there's probably more things all of us could have done differently or should have done,” the time has come to hunker down for a few months, he said.

The prime minister said he doesn’t think that a national “hammer” like the Emergencies Act is the way to go. Because while the national shutdown worked in the spring, millions of people were hurt and now with more information about the virus and testing offering more regional pictures of the spread, controls can be placed in a more targeted way. He pointed to the Atlantic bubble as a decision made by those provinces that’s been shown to work for them.

“I will add my voice to all those voices across the country, from doctors to premiers to mayors, who are saying ‘let's do what we need to do right now,’ and flatten this curve to get this explosion of cases in the second wave back under control,” Trudeau said. “We need to do one last big effort these coming months, and it starts with the coming weeks of really tightening up, which is why I'm back here in front of my house telling you: It's time. It's time to tighten up.” 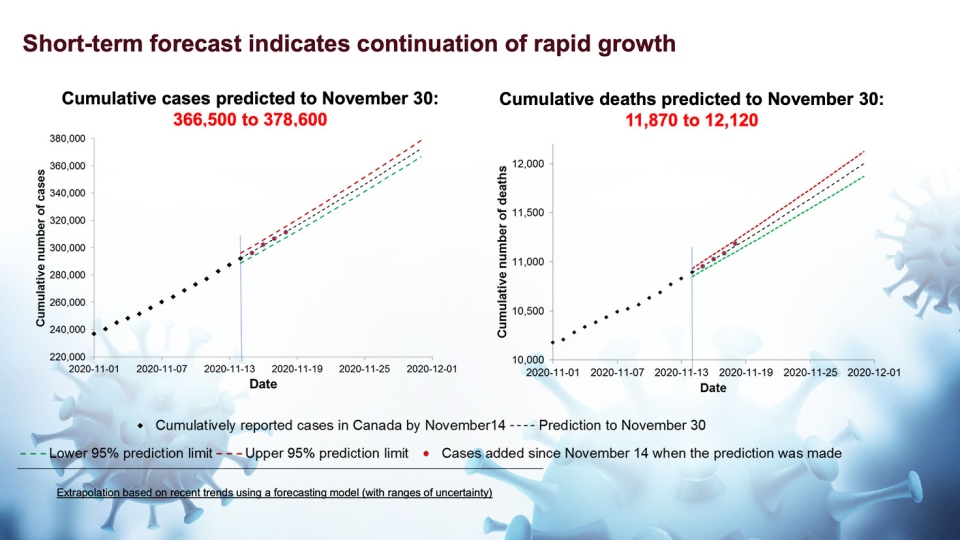