Canadians have been told to stay home during the pandemic. Are we listening?

TORONTO -- As leaders in many provinces start talking about loosening movement restrictions, new data suggests Canadians may already be deciding on their own to head out of the house a little more often.

Physical distancing has been a key weapon in the battle against COVID-19 in Canada and around the world. Because the virus can be transmitted from person to person, entire populations have been urged to never get within two metres of anyone who is not a part of their household.

Canadians started to hear these messages be directed at them in mid-March. They intensified as the month went on, with every province or territory declaring states or emergency and several ordering all their residents to always stay home unless absolutely necessary. To help facilitate this, many provinces ordered closures of "non-essential" businesses for which working from home is not an option, including large portions of the country's retail and service-industry sectors.

Publicly available data suggests the message got through. Tech giants Google and Apple have both been tracking public mobility via information from mobile devices, and both found sharp drop-offs in Canadians' movement levels as March gave way to April.

Google's Community Mobility Report for Canada found that activity in Canadian parks was down nearly 40 per cent from baseline levels by the end of March. Time spent in places affected by government closure orders was down even more substantially – over 50 per cent for retail and recreation destinations and close to 60 per cent for workplaces. Time spent at home, meanwhile, was about 30 per cent above what Google normally measures.

Apple's Mobility Trends Reports tracked similar conclusions for Canada despite reporting data differently. While Google is tracking location data on phones and comparing one place's current traffic level to its pre-pandemic activity, Apple bases its reports on requests for directions in Apple Maps.

Looking at searches for walking and driving routes, Apple measured Canadians' movement activity as being 50 per cent or more below usual levels for most of late March and early April, while public transit-related activity was down by more than 80 per cent.

Both reports show increased movement in the days leading up to Easter – when many of the retailers allowed to stay open chose to close for two statutory holidays – and unsurprising new lows in movement activity on Easter weekend, then a return to normal pandemic-era activity the following week.

Apple and Google both say they are preserving privacy in the gathering of this data, collecting it without making personally identifiable information available at any point in the process.

A report earlier this month from Environics Analytics concluded that there is more outdoor foot traffic during the pandemic in areas associated with lower incomes, suggesting those leaving their homes more often may have lower incomes and be unable to work from home or employed at workplaces that have been deemed essential.

Google's data currently stops on April 17, with activity in parks, grocery stores and pharmacies 22 per cent below normal levels, retail and recreation down by 53 per cent, and workplace activity down by 59 per cent.

Apple's data continues on for another week, showing a significant increase in requests for both driving and walking directions. Although both were still well below Apple's baseline levels – 31 per cent and 36 per cent, respectively – they were at their highest points since mid-March, when other provinces were just starting to follow Quebec's lead in declaring states of emergency. 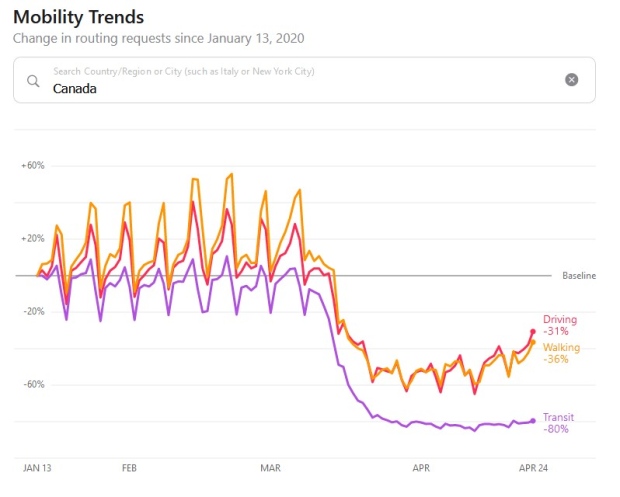 If this trend continues, and if Google and other measures of public mobility show similar findings, it could suggest a very real possibility of complacency – Canadians chafing under physical distancing requirements and starting to ignore them in a way that, up until this past week, had not been happening.

The increase in requests for directions from Apple Maps comes as the weather is warming in many parts of the country, making the idea of spending time outdoors more tempting, and as the national conversation around COVID-19 is increasingly dominated by talk of starting to reopen the economy.

New Brunswick loosened some of its rules on Friday, reopening parks, beaches, golf courses and places of worship – but still requiring physical distancing in all these places – after not detecting any new cases of the novel coronavirus for seven days. The first phase of Saskatchewan's reopening will begin May 4, while provinces including Manitoba, Prince Edward Island, and the hard-hit Ontario and Quebec have announced that reopening plans are in the works.

Both Google and Apple have made available limited geographic breakdowns of their findings within Canada. Neither shows any significant correlation between their data and the list of provinces working toward reopening.

There are a few notable trends in the regional data, including that Ontarians and Quebecers appear more likely to have started working from home, while parks in British Columbia are actually seeing more activity than usual – more than 40 per cent more for most of the past two weeks, according to Google.

Toronto, Ottawa and Montreal residents are much more likely than most Canadians to have stopped asking Apple Maps to find driving or walking routes, while there have been major upticks in searches for pedestrian directions in Calgary and Edmonton since Easter weekend.

'The situation is dire': Provinces scramble to provide respite for homeless amid COVID-19

Canadians have been told to stay home during the pandemic. Are we listening?

Health Canada issues warning against use of hydroxychloroquine for COVID-19