Phone data reveals who is staying home during COVID-19

TORONTO -- New data on the movement of Canadians shows that some are still defying recommendations to stay home amid the COVID-19 pandemic.

But the data suggests that the majority of Canadians who are failing to remain at home are not ignoring the dangers of COVID-19 — they may have no choice.

Environics Analytics, a company that aggregates data for analysis by businesses, released a report that maps the location data of Canadians across the country in an effort to see who is venturing out of their homes and why.

The split between who is staying in and who is going out does not fall along generational divides, but along economic lines: areas associated with lower-incomes showed more foot traffic.

The report suggests this could be influenced by those with lower-incomes being more likely to be employed in jobs that don’t allow them to work from home, or who work in fields considered essential services during the pandemic, such as grocery store or construction workers.

The report measured the rates of Canadians being “out-and-about” during the daytime on weekends from early February to early April using location data from cell phones. “Out-and-about” was defined as a person being more than 100 metres away from their inferred postal code “at least three times for ten minutes in each day.”

The report didn't specify the sample size of the location data, so it's unknown what percentage of the population the report represents.

HOW THE PROVINCES STACK UP ON STAYING IN

Although the percentage of Canadians going out during the day on the weekends dropped significantly between early February to April, the rate at which they did so varied across the provinces.

The report found that those in Western Canada left their homes more than those in central Canada.

Through February, before calls for people to stay at home were given, around 32-26 per cent of Canadians went out on weekends. The rate of this fell drastically throughout March, and was hovering around 16 per cent during the first week of April.

Of the provinces, Prince Edward Island had the lowest percentage of people going out in early April, with only one in ten are not staying home. But around one fifth of those in Newfoundland & Labrador, Saskatchewan, Alberta and British Columbia were still heading out on the weekend in early April, according to the report.

Ontario lined up exactly with the Canadian average at 16 per cent. 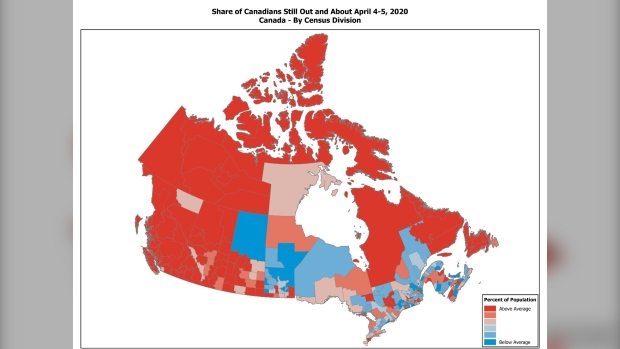 Data within Ontario showed that the rates of venturing out tended to be higher in rural areas than urban ones.

But this doesn’t necessarily mean that city dwellers are taking the recommendations more seriously than those in rural areas. The difference could be related to the fact that basic necessities — such as grocery stores — are fewer and farther between in rural areas, meaning residents might need to travel farther.

In the Vancouver area, for example, those in the outer suburbs were more likely to be heading out on weekends.

“The affluent areas in the central west parts of the map were more likely to stay home, and the topic of much news coverage -- people crowding on to beaches -- can be seen in the high rates of out and about in downtown Vancouver’s west end,” the report stated.

Much of Toronto had low rates of people heading out on weekends, but the report pointed out that “there are pockets of Out-and About rates that are well above-average that correspond to a range of lower-income areas. 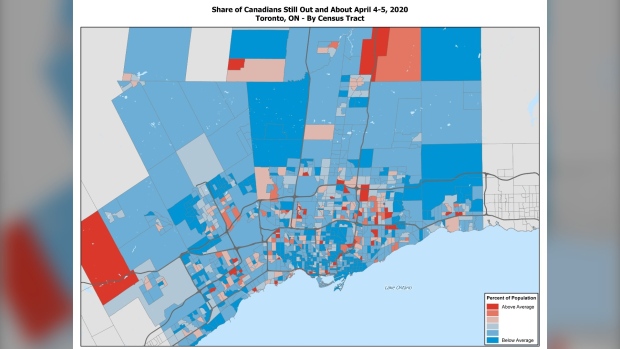 “Understanding these patterns socio-demographically would help identify measure that could be taken to help these residents protect themselves.”

SO WHO IS GOING OUT AND WHO IS STAYING IN?

By assigning postal codes different personality profiles based on demographics, socioeconomic status and diversity, the study built a rough comparison aimed at investigating why some are still going out on weekends.

For example, lower-income city dwellers were 21 per cent more likely than the average Canadian to not be complying with stay at home recommendations.

The report pointed out that this group is “less likely to be able to work from home as they are more likely to be in food, retail and other service jobs.”

In terms of how officials can change their messaging in order to reach this group, the report said that a better understanding of the individual challenges faced by those in this situation would help officials plan how to help them.

The report also found that people with similar economic status in different age groups reacted similarly, compared to people who had the same age but drastically different financial standings.

Lower-income urban dwellers are “less likely to be responsive to “top-down” messaging telling them what to do,” no matter their age.

The study authors suggest the current messaging from officials likely works well on highly educated, young people dwelling in a city, and wealthy middle-aged and older couples and families, noting that they're more likely to work in an industry that is compatible with working from home.

This data supports what frontline workers in service industries have been saying: that for many, complying with stay at home suggestions is a luxury.

How this information was gathered is an important question: after all, it tracks people’s movement through their cell phones, which brings up serious privacy concerns.

The firm says users would have consented to provide their location these apps, though it is unknown if these users knew their location information could be provided to other organizations.

According to Environics Analytics, no “personally identifiable information” is collected by the database, meaning they can’t track down a specific person using it.

Before Environics Analytics sees the data at all, it is “geographically jittered,” they say, which means that the location of each person is shifted a small amount.

Essentially, the company doesn’t know your exact address, but they do know your neighbourhood.

MobileScapes is described on their website as a way for organizations “to identify who’s visiting their locations, see where they live and work and how often they visit.”

But Environics Analytics isn't the first to track Canadian data in relation to the pandemic.

Google announced last week in a blog post that they would be releasing regular anonymized movement reports of its users in areas in Canada in the interest of helping health officials make decisions to combat COVID-19 using the data.

Some of their data has shown that Canadian traffic to transit stations has dropped 66 per cent after physical distancing recommendations came into effect. Traffic to parks dropped 16 per cent and traffic to retail and recreation areas dropped 59 per cent.

Google can only use data from users who have location history turned on in their account settings.

Some have raised concerns about public surveillance, particularly as fines started being introduced for those who are reported to police for not respecting physical distancing guidelines.

There are also limitations to this type of data-collection. As this newest report judges people’s movements based on cell phone data, it leaves out large patches of the population who do not own a smartphone or may not have downloaded one of the apps that mine users location. It also does not take into account those who may not have a particular home base, such as those struggling with homelessness.

Alberta to send PPE to Ontario, Quebec and B.C.

Phone data reveals who is staying home during COVID-19

Retired Ontario doctor returns to work to help with COVID-19

As Wuhan emerges from lockdown, residents line up to bury their dead

'Coronavirus will not overcome us': Queen offers Easter message of hope