Liberals say by 2035 all new cars, light-duty trucks sold in Canada will be electric 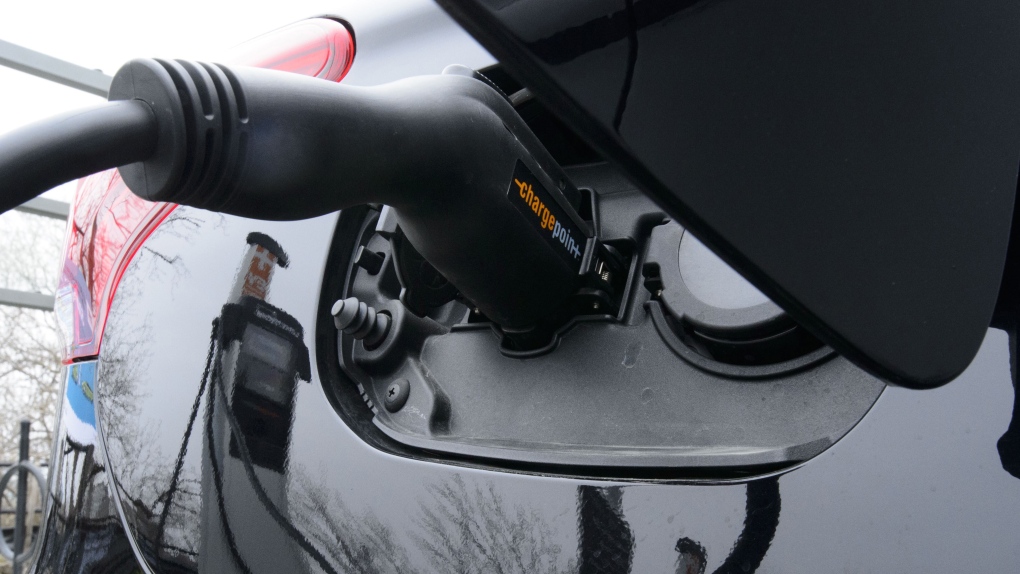 A car is charged at a charge station for electric vehicles on Parliament Hill in Ottawa on Wednesday, May 1, 2019. THE CANADIAN PRESS/Sean Kilpatrick
OTTAWA -

The Liberal government announced Tuesday it's speeding up its goal for when it wants to see every new light-duty vehicle sold in Canada to be electric.

Transport Minister Omar Alghabra said that by 2035, all new cars and light-duty trucks sold in the country will be zero-emission vehicles.

Until now, the government had set 2040 as the target for when it wants to see all passenger vehicles sold to be powered by this technology as opposed to petroleum.

Alghabra cited a recent report from the Paris-based International Energy Agency that says by 2035, nearly all new light-duty vehicle sales would have to be electric to achieve net-zero emissions by mid-century.

By 2050, Canada has committed that its economy will either emit no greenhouse gas emissions or offset this heat-trapping pollution driving climate change by other measures.

Next to the oil and gas sector, transportation has historically been Canada's second largest contributor of greenhouse gas emissions, with light-duty passenger trucks and cars together being the largest culprits in that category.

"Let me just say, our target is ambitious, undoubtedly, but it is a must," Alghabra said of the new electric vehicle target.

"We believe that it's doable. It needs determination, it needs focus, it needs effort."

Alghabra cited how the government has already poured at least $600 million into a rebate program that offers consumers a break when they buy new electric vehicles in hopes to get more of them on the road.

"We know that we need to do more," Alghabra said Tuesday, explaining the program would be expanded to include more categories of vehicles, including ones that are used. He didn't provide a specific dollar figure on what the changes could cost.

The existing program offers buyers an upfront discount of up to either $5,000 or $2,500 and sellers then have to claim the incentives to be reimbursed.

Federal officials last fall said the rebates have been popular, but warned it wasn't going to be enough to reach the federal government's first target of electric cars making up 10 per cent of sales by 2025.

Environment Minister Jonathan Wilkinson said with the tougher goal, the country would work with the United States on fuel efficiency and consult with stakeholders on new regulatory measures.

Those include bringing in a possible mandate that would require the auto industry to make or sell more electric vehicles, which proponents of zero-emissions technology say helps to ensure there is more supply when consumers are in the market for a new vehicle.

"It is a mandatory target," Wilkinson said of the 2035 goal.

Joanna Kyriazis, a senior policy adviser at Clean Energy Canada, said electric vehicles comprise about three to four per cent of car sales in Canada, a far cry from the 2025 goal of 10 per cent.

She said electric vehicle sales in France, the United Kingdom and Germany have seen a big jump, which she said shows Canada's new target needs to be supported by policies that see more of these vehicles available for purchase on dealership lots, more charging infrastructure and incentives aimed at electric trucks and SUVs.

"It's great to have a new, more ambitious target, but really, that target means nothing if we don't have a clear plan and policy pathway to get there," said Kyriazis.

In a statement, the Global Automakers of Canada said industry shares the government's goal of "carbon elimination," but found the announcement lacking details on how to transition to 100 per cent sales of zero-emission vehicles by 2035.

Following Tuesday's announcement, Wilkinson told The Canadian Press part of why the government changed its target for only selling new electric vehicles by 2035 instead of 2040 is to ensure many of the gas-powered ones sold before then are retired by 2050, given how the average age of a vehicle is roughly 15 years.

"If we don't make progress on transportation, we do not meet our climate targets, simply full stop."

This report by The Canadian Press was first published June 29, 2021.