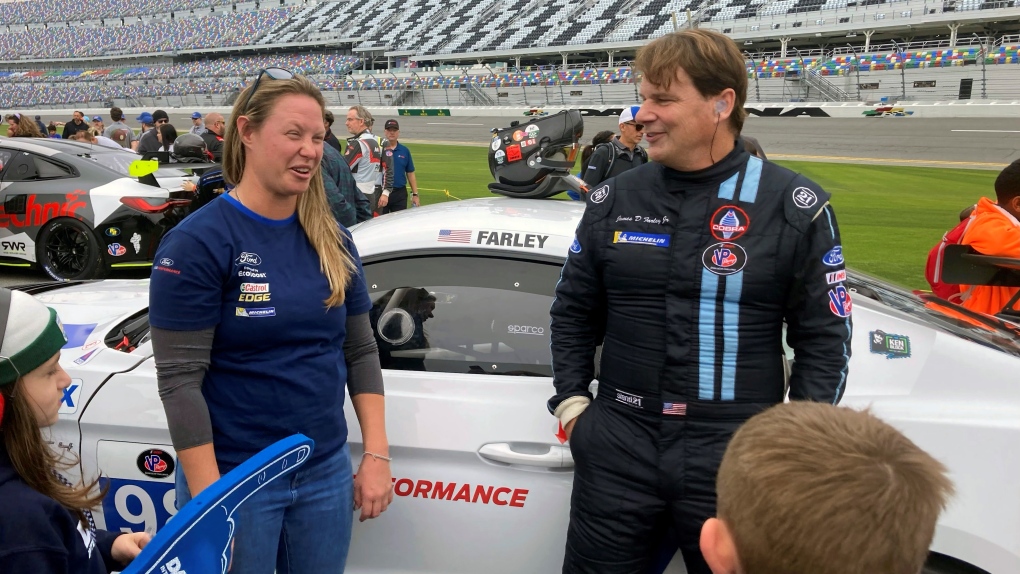 Tucked in the back corner of an outpost paddock at Daytona International Speedway stood the chief executive of Ford, leaning against a cart having a casual conversation with the heads of The Wood Brothers Racing team.

Jim Farley was wearing a firesuit and hardly looked the CEO part. On Saturday, he was a racer.

The 60-year-old made his professional racing debut with a 12th-place finish in the IMSA VP Racing SportsCar Challenge at Daytona. An accomplished historic racer, Farley drove a Multimatic Motorsports-run Ford Mustang GT4 in the GSX class.

It was the first sprint race in the new multi-class series that features Bronze or Silver-rated drivers.

Farley tried to fly under the radar and roam Daytona as any other “gentleman driver” and not the head of one of the most active automakers in motorsports. But he's still the head of Ford, and that's why Eddie and Leonard Wood traveled from Friday night's NASCAR Hall of Fame ceremony in North Carolina down to Daytona to watch Farley race.

Across the speedway in his motorhome, Roger Penske and Tim Cindric watched Farley race on a massive television screen with timing and scoring of the event on a second screen.

“I should have used a fake name on the entry form,” Farley joked to The Associated Press. He said motorsports is a vital part of Ford Motor Co., particularly in employee morale. Ford last year won the Daytona 500 with Austin Cindric and the NASCAR Cup championship with Joey Logano.

“It's so good that he's interested,” Penske said of Farley racing at Daytona. “It's good for Ford because he understands what motorsports means to the company. You know, both General Motors and Ford have the top leadership really invested into motorsports and how it can evolve in making a better car.”