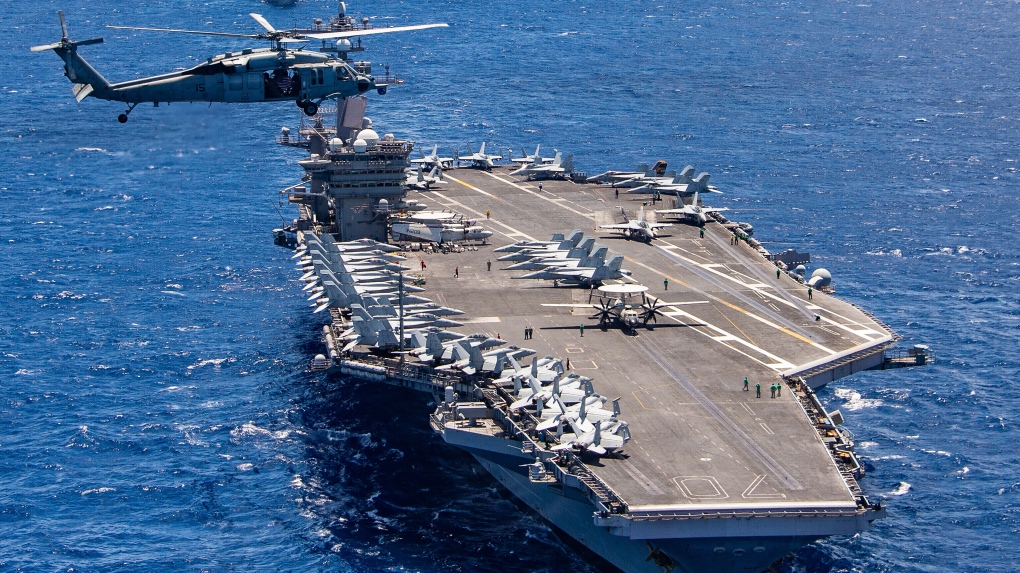 In this photo provided by the U.S. Navy, the aircraft carrier USS Carl Vinson participates in a group sail during the Rim of the Pacific exercise off the coast of Hawaii on July 26, 2018. (Petty Officer 1st Class Arthurgwain L. Marquez/U.S. Navy via AP)
BANGKOK -

The pilot was able to eject before the aircraft hit the deck of the USS Carl Vinson on Monday and was safely recovered by a helicopter, said Lt. Mark Langford, a spokesman for the U.S. 7th Fleet.

Seven sailors, including the pilot, were injured and three were evacuated for medical treatment in Manila, Philippines, while four who were treated on board the ship. The three sent to Manila were reported in stable condition on Tuesday morning, the Navy said.

Details on the crash of the multimillion-dollar aircraft were still being verified, Langford said.

"The status and recovery of the aircraft is currently under investigation," he told The Associated Press.

Two American carrier strike groups with more than 14,000 sailors and marines are conducting exercises in the South China Sea, which the military says is to demonstrate the "U.S. Indo-Pacific Command Joint Force's ability to deliver a powerful maritime force."

Impact to the deck of the USS Carl Vinson was "superficial," Langford said, and both carriers have resumed routine flight operations.

As China has pressed territorial claims in the South China Sea and increased pressure on Taiwan, the U.S. and its allies have stepped up exercises in the region, in what they call freedom of navigation operations in line with international law.

As the Carl Vinson and Abraham Lincoln strike groups began their dual carrier operations on Sunday, China flew 39 warplanes toward Taiwan in its largest such sortie of the new year, according to Taiwan's defence ministry.

The formation of 24 Chinese J-16 and 10 J-10 fighter jets stayed out of Taiwanese air space, but the maneuver prompted Taiwan to scramble its own aircraft in response.

Chinese pilots have been flying toward Taiwan on a near-daily basis, and it was unclear if Sunday's flights were a response to the American exercises. China's Ministry of Foreign Affairs refused to comment.

Taiwan and China split during a civil war in 1949, but China claims the island as its own territory. Beijing has used diplomatic and military means to isolate and intimidate the self-ruled island, but the U.S. has continued to support Taiwan by selling it advanced weapons and fighter planes.

While genealogical DNA tests may be marketed as harmless and exciting way for people to learn more about their ancestral heritage, CTVNews.ca speaks with a Canadian researcher who says more support is needed for those who get unexpected results that have potential to disrupt family relations.

The sex assault trial of Canadian musician Jacob Hoggard is hearing from a limo driver who drove one of the complainants to and from the Hedley frontman's hotel in 2016.