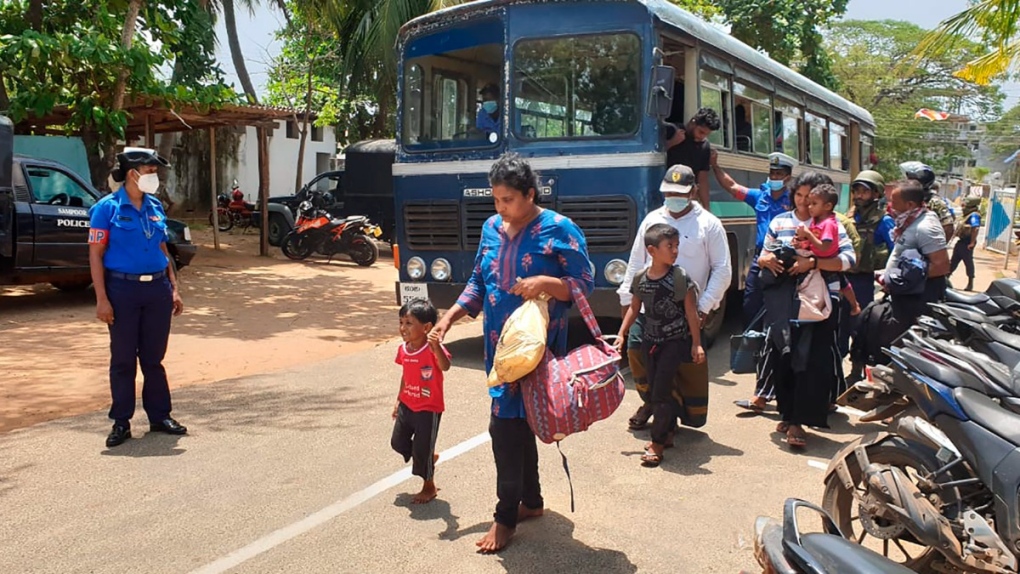 A group of people who were attempting to travel illegally to Australia are taken to a police station in Trincomalee, Sri Lanka, on May 24, 2022. (Mangalanath Liyanaarachchi / AP)
COLOMBO, Sri Lanka -

Sri Lanka's navy said Tuesday that it has arrested 67 people who it believes were trying to travel by sea to Australia illegally.

The navy said in a statement that 12 men were arrested first near the port town of Trincomalee, 260 kilometres (160 miles) northeast of the capital Colombo on Monday and, upon questioning them, intercepted 55 more people travelling in a fishing vessel. It said the persons were aged between 3 and 53, and that five of them are suspected be part of a human smuggling ring.

Navy spokesperson Indika de Silva said while their destination is still not clear it is suspected that they were headed to Australia.

Police were still determining the motivation for the illegal voyage, de Silva said, but Sri Lankans over the years have travelled to Australia and other developed nations illegally for economic and political reasons.

Australian media reported Tuesday that officials sent 15 people back to Sri Lanka on Saturday after they were found travelling in a boat near Christmas Island.

Sri Lanka is facing its worst economic crisis in recent memory facing heavy shortages of essentials from food, cooking gas, medicine and fuel to toilet paper and matchsticks. People have been forced to stay in long lines to buy their essentials over the past few months with many of them returning empty-handed.

The island nation has defaulted on foreign debt for the first time after announcing last month it would suspend payments on US$7 billion in foreign debt due this year, with nearly $25 billion due by 2026 out of a total of $51 billion.

The country's new prime minister said last week that petrol stocks ran down to a final day, worsening commuting problems and lengthening lines. But shipments of gasoline paid through an Indian credit line started arriving over the weekend.

Power and Energy Minister Kanchana Wijesekera told reporters Tuesday that the Cabinet has given him permission to work on an additional $500 million credit line from India to buy fuel in addition to already sanctioned credit lines totaling $700 million.

Sri Lanka's economic crisis has brought on a political crisis with protesters occupying the entrance to the president's office for more than 40 days demanding President Gotabaya Rajapaksa's resignation.

Attacks on peaceful protesters by government supporters triggered countrywide riots, killing nine persons including a lawmaker and wounding 200. Homes and properties of sitting ministers and government supporters were burned down. The violence has nearly dismantled the Rajapaksa dynasty after the president's brother Mahinda Rajapaksa resigned as prime minister amid the violence.

Two other siblings and a nephew resigned from their Cabinet posts earlier in April and Gotabaya Rajapaksa himself faces the prospect of his powers being clipped. The new Prime Minister Ranil Wickremesinghe, who is tasked with reviving the economy, is working on a constitutional amendment to dilute presidential powers and empower the Parliament.

The amendment was discussed by the Cabinet on Monday and sent to party leaders in Parliament for their views.