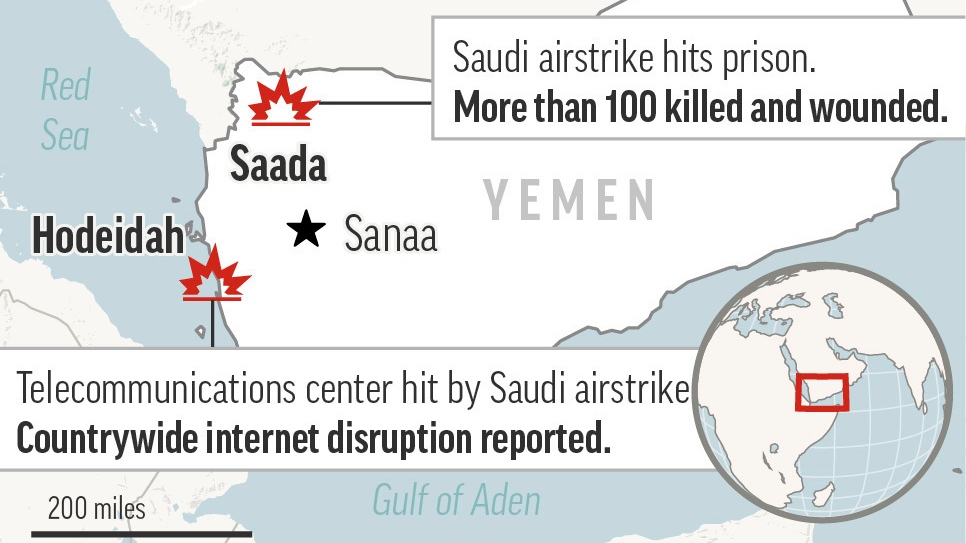 The death toll from a Saudi-led coalition airstrike that hit a prison run by Yemen's Houthi rebels has climbed to at least 82 detainees, the rebels and an aid group said Saturday.

Internet access in the Arab world's poorest country meanwhile remained largely down as the coalition continued airstrikes on the rebel-held capital, Sanaa, and elsewhere.

The airstrike in the northern Saada province Friday was part of an intense air and ground offensive that marked an escalation in Yemen's yearslong civil war. The conflict pits the internationally recognized government, aided by the Saudi-led coalition, against the Iranian-backed rebels.

The increase in hostilities follows a Houthi claim of a drone and missile attack that struck inside the United Arab Emirates' capital earlier in the week. It also comes as government forces, aided by UAE-backed troops and coalition airstrikes, have reclaimed the entire Shabwa province from the Houthis and pressured them in the central Marib province. Houthis there have for a year attempted to take control of its provincial capital.

Ahmed Mahat, head of Doctors Without Borders's mission in Yemen, told The Associated Press his group counted at least 82 dead and more than 265 wounded in the airstrike.

The Houthis' media office said rescuers were still searching for survivors and bodies in the rubble of the prison site in Saada on the border with Saudi Arabia.

Saudi coalition spokesman Brig. Gen. Turki al-Malki said the Houthis hadn't reported the site as needing protection from airstrikes to the UN or the International Committee of the Red Cross. He claimed the Houthis' failure to do so represented the militia's "usual deceptive approach" in the conflict.

The Houthis used the prison complex to hold detained migrants, mostly Africans attempting to cross through the war-torn country into Saudi Arabia, according to the humanitarian organization Save the Children.

But Mahat, of Doctors Without Borders, said the airstrike hit a different part of the facility housing other types of detainees, and no migrants were killed.

The Saada attack followed another Saudi-led coalition airstrike Friday at the Red Sea port city of Hodeida that hit a telecommunications center key to Yemen's connection to the internet. Access to the internet has remained "largely down for more than 24 hours" in the country, advocacy group NetBlocks said Saturday.

The Saada airstrike, one of the deadliest of the war, was not the first to hit a Houthi-run prison. A September 2019 airstrike hit a detention center the southwestern Dhamar province, killing more than 100 people and wounding dozens.

Rights groups have previously documented that the Houthis placing civilian detention centers near military barracks under constant threat of airstrikes.

Friday's airstrikes have renewed criticism of the coalition from the United Nations and international aid and rights groups, who just days previous had blasted the Houthis for the attack on the Emirates.

Saudi-led coalition airstrikes have hit schools, hospitals and wedding parties, killing an estimated thousands of civilians according to monitoring groups. The Houthis meanwhile have used child soldiers and indiscriminately laid land mines across the country. They also launched cross-border attacks using ballistic missiles and explosives-laden drones on Saudi Arabia and the UAE.

The coalition continued its airstrikes on Sanaa and elsewhere Saturday, targeting a Houthi-held military facility and an abandoned headquarters of Yemeni state TV in the capital. The coalition said airstrikes also targeted the Houthis in the contested Harib district in Marib.

And Yemeni forces closely allied with the UAE, known as the Giants Brigades, said they shot down three drones carrying explosives launched by the Houthis on government-held areas in Marib and Shabwa provinces.

The rebels, meanwhile, held a funeral procession in Sanaa for a senior military official killed along with family members in a coalition airstrike last week. Hundreds of Houthi supporters attended the military funeral of Gen. Abdalla Kassem al-Junaid, who headed the Air Academy.

"We urge all parties to commit to a peaceful, diplomatic solution to ending the conflict. The Yemeni people deserve to live in peace and determine their own future," he wrote on Twitter.

The latest escalation comes almost a year after President Joe Biden's administration announced an end to U.S. support for the coalition and removed the designation of the Houthis as a terrorist group as part of American efforts to end the grinding war.

The Houthi-claimed attack on the UAE on Monday prompted Biden to say that his administration would consider restoring the status of the Iranian-backed rebels as terrorists.

The latest fighting is some of the most intense since the 2018 battle for Hodeida and comes after a year of U.S. and UN diplomatic efforts failed to bring the two sides to the negotiating table. On Friday, the UN criticized the Houthis for not even allowing the body's new envoy to visit their territories. Pitched fighting in Marib has remained a major sticking point, as the Houthis attempt to complete their control of the northern half of Yemen.

"The coalition has pulled the stops out to prevent a collapse in Marib and to shift the conflict towards a military equilibrium," said Peter Salisbury, Yemen expert at the International Crisis Group.

The conflict in the Arab world's poorest country began in 2014, when the Houthis took Sanaa and much of northern Yemen, forcing the government to flee to the south, then into exile in Saudi Arabia. The Saudi-led coalition, backed at the time by the U.S., entered the war months later to try to restore the government to power.

The conflict has since become a regional proxy war that has killed tens of thousands of civilians and fighters. The war also created the world's worst humanitarian crisis, leaving millions suffering from food and medical care shortages and pushing the country to the brink of famine.

Communities have been left reeling after a severe thunderstorm ripped through much of southern Ontario, leaving seven people dead and tens of thousands without power.

Afghanistan's Taliban rulers on Sunday began enforcing an order requiring all female TV news anchors in the country to cover their faces while on-air. The move is part of a hard-line shift drawing condemnation from rights activists.

Enough specialty infant formula for more than half a million baby bottles arrived Sunday in Indianapolis.