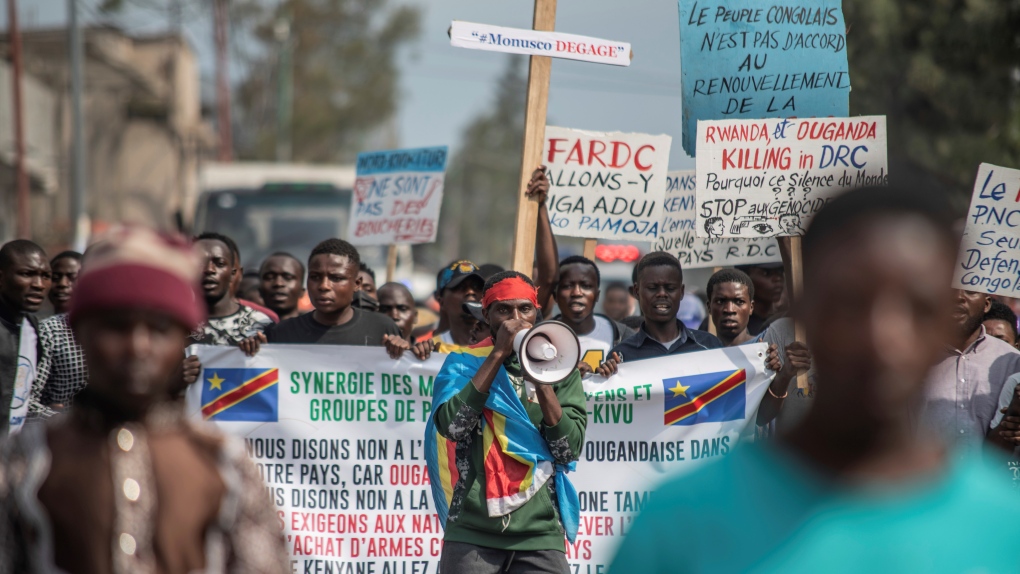 Goma residents join in a protest called by the civil society against the United Nations mission to the Democratic Republic of Congo and the current conflict between government forces and M23 rebels, in Goma, Thursday, Dec. 1, 2022. (AP Photo/Moses Sawasawa)
BENI, Congo -

Congo's government dramatically increased the death toll from a massacre last week they blamed on M23 rebels, saying Monday that 270 people had been killed in an attack that broke a fragile cease-fire agreement.

M23's chairman challenged the figure and accused Congo's government of creating a diversion from other atrocities in the region that he says have been committed by government soldiers and their allies.

Government spokesman Patrick Muyaya said Monday that the government was opening an official inquiry into what happened in Kishishe, a village located about 70 kilometres (43 miles) from the regional capital of Goma.

"Our justice minister is currently at The Hague in the Netherlands and has already referred the matter to the prosecutor of the International Criminal Court so that he can investigate the massacres in Kishishe," Muyaya said. "We are asking the population to be calm and that these M23s will pay for these attacks."

There was no immediate corroboration of that government figure or the new toll of at least 270 dead due to insecurity in the area but Muyaya said the information had come from local civil society groups.

However, M23 chairman Bertrand Bisimwa said the death toll figure had been inflated by a tribal militia leader and that only eight people had been killed by stray bullets during the clashes last Tuesday in Kishishe.

"The (Congolese) government without any due diligence or investigation and with lack of verified information from credible sources, for political gains has hijack(ed) these false allegations with the dual objective, firstly concealing the setbacks suffered by its coalition in the Kishishe area and secondly, to divert one's attention on ongoing genocide committed by its coalition," Bisimwa said in a statement.

Regional leaders at a summit in Angola late last month had warned that if M23 did not respect the cease-fire and relinquish control of the towns it held that an East African regional force would make them do so.

A contingent of more than 900 Kenyan troops already has deployed to eastern Congo as part of the regional force agreed to in June and South Sudan has said it is sending 750 personnel too. The force will eventually include two battalions from Uganda and two from Burundi as well.

M23 was not included in the talks in Angola but its leaders had said they would abide by it. After news broke of the fighting in Kishishe, the Congolese military warned it would that its armed forces "are obliged to respond to all attacks and to do everything possible to protect the Congolese people."

The M23 rose to prominence a decade ago when its fighters seized Goma, the largest city in Congo's east, which sits along the border with Rwanda. After a peace agreement, many of M23's fighters were integrated into the national military.

Then the group re-emerged just over a year ago, saying the government had failed to live up to its promises under the peace deal. By June, M23 had seized the strategic town of Bunagana near the border with Uganda. It later took control of two more major towns -- Rutshuru and Kiwanja.