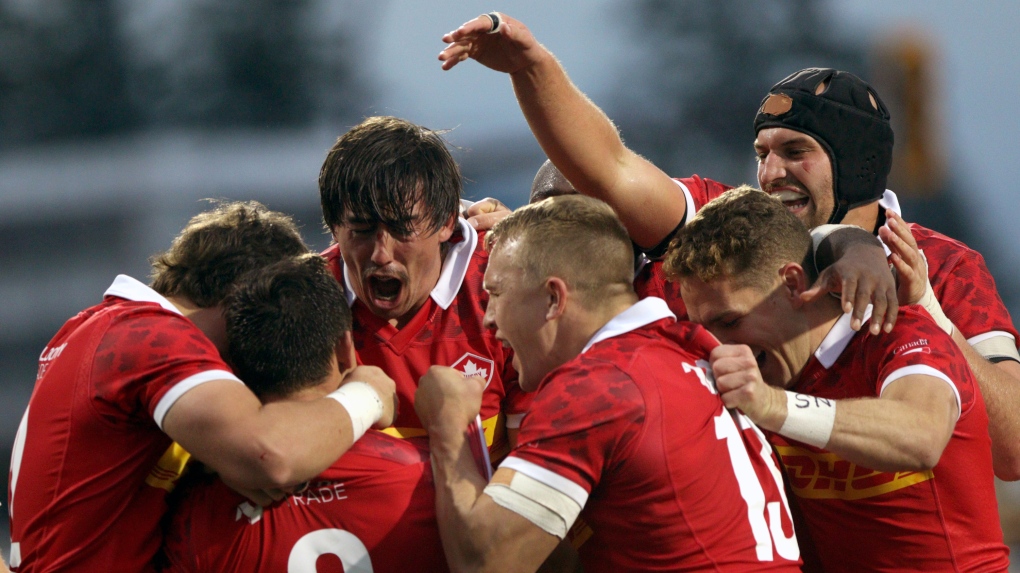 Canada's Kyle Baillie (centre) celebrates with teammates after a try against Chile during the second half of a Rugby World Cup 2023 qualification match at Starlight Stadium in Langford, B.C., on Saturday, October 2, 2021. (THE CANADIAN PRESS / Chad Hipolito)

Starting the rebuilding process after failing to qualify for the Rugby World Cup, Canada coach Kingsley Jones has named his roster for a November tour of Europe.

Off the field, Rugby Canada is weighing up the fallout of failing to make the sport's showcase for the first time.

“Hugely disappointing,” said Rugby Canada CEO Allen Vansen. “And not at the standard â€¦ rightfully all of our followers and fans and participants expect Canadian rugby to be.”

“Really not acceptable from a strong nation like Canada, but we always knew that (20)23 was going to be probably the most difficult World Cup to qualify for,” he added.

The Canadian men, currently ranked 23rd in the world, lost World Cup qualifying series against the 17th-ranked Americans (59-50 on aggregate) and No. 26 Chile (54-46 on aggregate) and will now be a spectator at France 2023, after qualifying for all nine previous tournaments.

The writing was likely on the wall. Canada only qualified for the 2019 World Cup in Japan via the last-chance repechage and the pandemic hit the sport hard in North America.

Chris Le Fevre, a former board member of Rugby Canada and World Rugby's executive council, called the loss to Chile “the final nail in the coffin of Canada's collapse in men's international rugby.”

In an open letter dated Oct. 10, he called on Rugby Canada to clean house, citing “the litany of now long-standing inept administration, constant denial, and spinmeistering.”

The pandemic restricted the Canadians to just two matches between the 2019 World Cup and the September start of World Cup qualifying.

Canada lost to No. 4 England and No. 9 Wales in July by a combined score of 138-26, with Sky Sports describing a young England side's 70-14 romp as the “thrashing of a hopelessly outgunned Canadian side.”

Jones' job as men's 15s coach and director of men's performance rugby is not in jeopardy. Vansen says the former Wales captain is reviewing the World Cup qualifying performance and preparing for two November matches, which Vansen calls “the start of our journey through to qualify for 2027.”

“He remains our head coach and has my full support,” Vansen said.

Jones has stuck with the young roster he deployed in the July tests and World Cup qualifying for matches against No. 19 Portugal on Nov. 6 in Lisbon and No. 28 Belgium on Nov. 13 in Brussels.

“It's pleasing. All those guys, they've put their hands up to come back,” Jones said.

The July tests saw 10 players capped for the first time.

Jones had expected his young talent to get seasoning in the Americas Rugby Challenge and other tournaments, only to see them cancelled through COVID. Without the pandemic, he says they might have got eight to 10 test matches before the July test window.

Combine that another season playing in North America's Major League Rugby circuit or time spent in the sevens circuit and he was confident Canada could qualify via the repechage, if needed.

“That's the failure, just coming up short in those (qualifying) games. It's obviously a hefty price but I think the majority of this group will be playing for Canada the next 10 years,” Jones said. “I really believe that â€¦ These boys have huge potential.”

Turnover from the last World Cup was also a factor, according to Vansen.

“We knew we had a really young team and we've known that for years coming into (qualifying),” said Vansen. “The pandemic really created an unfortunate perfect storm of not being able to get these young players who've got a ton of talent that we've developed domestically and through the Pacific Pride academy and in MLR enough opportunity to develop in international test match rugby.”

Rugby Canada's goals remain lofty. They include getting the men's 15s team “back to that top Tier 2 nation” status and have the women's 15s make the podium at next year's World Cup in New Zealand, according to Vansen.

The Canadian women are ranked third in the world but have not played in two years, a stretch of inactivity that will end Monday in a match against the sixth-ranked U.S.

The failure to make the men's World Cup will impact the bottom line, with World Rugby's financial contribution dropping.

“It's too early to know quite yet what will happen with that targeted high-performance investment for the men's 15s, but (it's) reasonable to expect we're going to see a significant reduction of that investment,” Vansen said.

In 2018, Rugby Canada said failure to qualify for the 2019 tournament would result in a loss of more than $1 million annually in high-performance investment from World Rugby. After surviving the repechage, Canada got an extra $450,000 in both 2018 and '19 from World Rugby.

While the annual World Rugby investment covers the men's and women's 15s and sevens squads as well as other programs Vansen says the amount going to the Canadian men's 15s team has been decreasing over the last five or six years.

Had Canada qualified for the World Cup, it would have received some 450,000 pounds ($762,100) from World Rugby over two years ahead of the tournament, according to Vansen.

Own The Podium funding for the women's sevens team is also expected to go down.

The women, after a turbulent run-up to the Olympics marked by complaints of an abusive training environment and a COVID outbreak, placed a disappointing ninth in Tokyo after winning bronze at the 2016 Olympics in Rio.

The Canadian men finished eighth in Tokyo - matching their position in the HSBC World Rugby Sevens Series standings before the season was cancelled due to the pandemic.

Vansen called the women's finish “an unacceptable result with the investment that's made in that program.”

The women's sevens team received $10,487,500 from Own The Podium in the (five-year) quadrennial before Tokyo. The men's seven squad, which failed to qualify for Rio, received $130,000 over the same period.

Vansen says Rugby Canada will be asking for a “modest increase” in men's sevens funding, while acknowledging competition for funds in team sports is high.

A governing body already feeling the pinch is about to tighten its belt again.

“We're certainly going to have some tough conversations and decisions to make around how we balance our budgets and what the impacts are to all of our programs as we move forward,” said Vansen.

Other changes will likely come from a review of Rugby Canada's high performance program following a formal complaint from the women's sevens team in January under the organization's bullying and harassment policy.

The women's sevens team is currently on its fourth coach this year with three interim coaches (Mick Byrne, Kelly Russell and Jack Hanratty) following longtime leader John Tait, who stepped down in the wake of the complaint filed by 37 current and former team members.

An independent review concluded that while the conduct described in the complaint reflected the experiences of the athletes, it did not fall within Rugby Canada's policy's definition of harassment or bullying.

On the plus side, Vansen sees light at the end of the tunnel with regards of the damage done to the sport by the pandemic, pointing to the two World Series events hosted by Vancouver and Edmonton and the World Cup qualifying matches in St. John's, N.L., and Langford, B.C.

But Rugby Canada is paying for missteps in the past.

Closing down the developmental Pacific Pride, a national high-performance men's academy program, in 2005 due to cost impacted the player pathway. The program was reinstated last year, largely drawing on uncapped players seen to be one to three seasons away from playing senior international rugby.

The program has already sent players to the men's national team, with Foster Dewitt, Isaac Olson, Matthew Oworu and David Richard looking to earn their first senior caps on the November tour.

Canada is not the only Tier 2 country under pressure to keep up with the big boys.

While the U.S. Eagles beat Canada in qualifying, they then lost to No. 16 Uruguay and now must beat Chile next summer to make it to the World Cup. A loss then and the Americans will drop down into the repechage.

The U.S. were thrashed 104-14 by the second-ranked All Blacks last Saturday in Washington. D.C., with both teams without their top players because the match was played outside the international window.

The New Zealand Herald called it a “mismatch of epic proportions.”

The U.S., like Canada, has largely relied on players from the domestic MLR although the Americans have had more success bringing back overseas pros into the national front. Despite World Rugby rules freeing players for international windows, many are under pressure from their clubs to stay put.

Fly half Peter Nelson, who plays for Aurillac in the French second tier, is the only overseas pro on the Canadian November tour roster. Rugby Canada said French-based players Tyler Ardron and Matt Tierney (Castres Olympique), Tyler Dugoid (Montpellier), Will Percillier (Stade Francais) and Evan Olmstead (Biarritz) were all unavailable or injured.

Jones hopes some of those may be available for the tour in case of injury.

Depending on their location, the Canadian players leave Friday and Saturday for Europe.

This report by The Canadian Press was first published Oct. 27, 2021