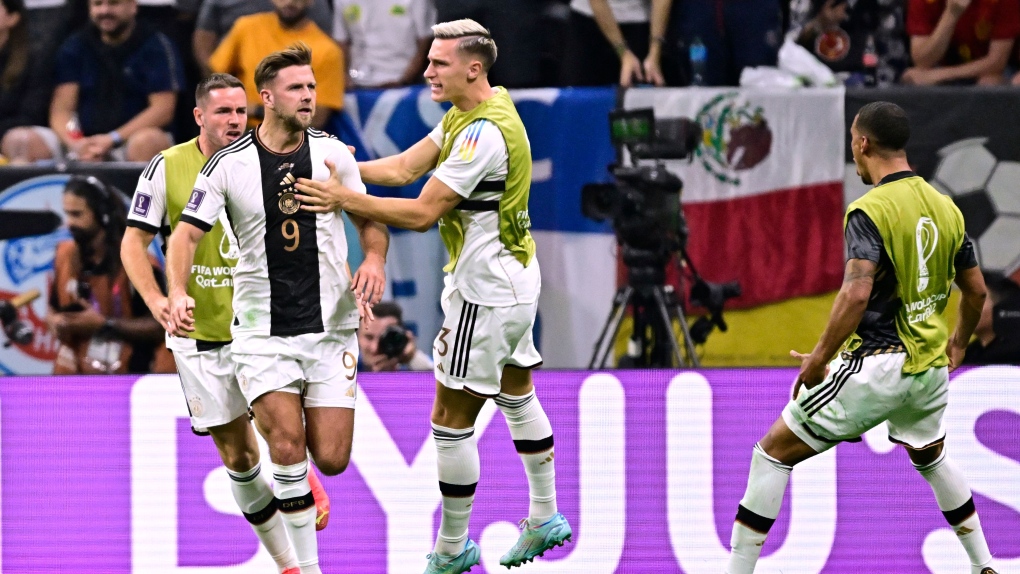 Germany's forward Niclas Fullkrug, second left, celebrates with teammantes after scoring the tying goal during the Qatar 2022 World Cup Group E football match between Spain and Germany at the Al-Bayt Stadium in Al Khor, north of Doha on Nov. 27, 2022. (Photo by JAVIER SORIANO/AFP via Getty Images)

Another day of World Cup 2022 action returned as the Group Stage continued on Sunday with some big results, including Canada being eliminated.

Previously on Saturday, Lionel Messi led Argentina to a crucial 2-0 victory over Mexico and France became the first team to clinch a spot in the Round of 16. Meanwhile, both Poland and Australia staved off elimination against Saudi Arabia and Tunisia, respectively.

Here is everything you need to know about what went down on Day 8 in Qatar.

The biggest clash of the day saw heavyweights Spain and Germany draw 1-1, thanks to some super subs.

It was a tense opening 45 minutes, with only a handful of true chances across the whole match. As both sides went inches away from breaking the deadlock, the coaches turned to the bench.

Alvaro Morata’s diagonal run into the box saw the ball redirected home for 1-0 but late on Niclas Fullkrug ensured Germany earns their first point at the World Cup with a bullet strike.

Alphonso Davies scored Canada's first goal at a men's World Cup in just the second minute but Croatia hit back resoundingly for a 4-1 victory.

Andrej Kramaric equalized in the 36th minute and Marko Livaja gave Croatia the lead in the 44th minute. Kramaric added another for the third and Lovro Majer wrapped up the scoring with a 94th-minute tap-in.

After an exuberant start by Canada, Croatia steadily took control and were much better on the day.

As if anyone needs any extra motivation at a World Cup, Croatia found some through John Herdman's "We're going to go and F Croatia" comment shortly after Canada lost to Belgium.

Morocco put in a magnificent performance to beat Belgium 2-0.

Substitute Abdelhamid Sabiri caught Belgian goalkeeper Thibaut Courtois off guard with a direct free kick from a difficult angle to give Morocco a 1-0 lead.

Another substitute, Zakaria Aboukhlal, wrapped up the win with a precise finish in the 92nd minute.

Morocco now heads into its final group match against Canada on Thursday knowing a draw will be enough to advance to the Round of 16.

Belgium can still advance with a win in its final match against Croatia, but a draw will make goal difference a factor.

Regular Moroccan goalkeeper Bono was a late scratch while Bayern Munich's Noussair Mazraoui was fit to start after picking up an injury in Morocco's opening match against Croatia.

An 81st-minute winner from Keysher Fuller gave Costa Rica a 1-0 win over Japan.

This is a massive missed opportunity for the Japanese after beating Germany in their opening match.

Costa Rica now have some semblance of hope after getting drubbed 7-0 by Spain. The North American side will play Germany in its final match on Thursday.

Day 9 concludes the second round of group phase matches and looks like this: