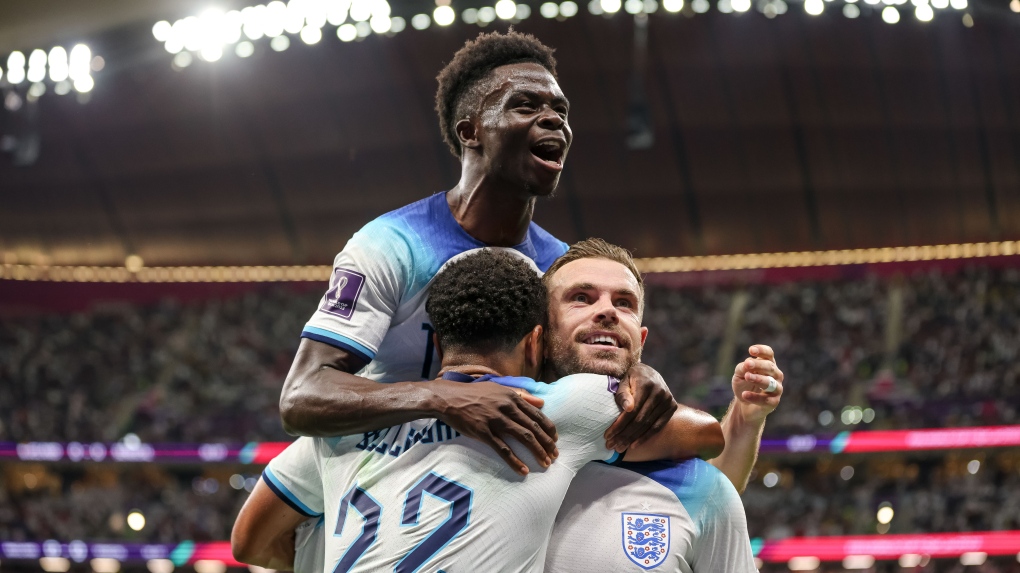 Jordan Henderson, middle right, of England celebrates after scoring his team's first goal with Jude Bellingham of England, left, and Bukayo Saka of England during the FIFA World Cup Qatar 2022 Round of 16 match between England and Senegal at Al Bayt Stadium on Dec. 4, 2022 in Al Khor, Qatar. (Photo by Tnani Badreddine/DeFodi Images via Getty Images)

The knockout rounds continued on Sunday as four more teams looked to avoid elimination in the 2022 World Cup in Qatar.

Up first, reigning champion France continued its run for back-to-back titles with a win against Poland and England went head-to-head with Senegal.

Yesterday saw the Netherlands send the United States packing before Argentina brushed off a slight scare from Australia to move on thanks to more Lionel Messi magic.

Here is what went down on Day 15 in Qatar.

Euro 2020 finalists England booked a spot in the quarterfinals after a comfortable 3-0 win over Senegal.

The opening moments were a cagey affair, with the first shot on target coming at the half-hour mark, but first half goals from Jordan Henderson and Harry Kane put England up by two at the break.

Eventually, England sustained its pressure in the second half with Bukayo Saka adding a third goal to wrap up the win. Meanwhile, Raheem Sterling is unavailable due to a family matter.

Reigning World Cup winner France continued its red-hot form and reached the quarterfinals after a 3-1 win over Poland.

France’s stacked attack pushed hard against Poland in the opening 45 minutes, despite Olivier Giroud missing a wide-open chance to break the deadlock.

Immediately after, Poland looked to score but saw an attempt saved, then blocked and then cleared off the line in one motion.

Just before halftime, Giroud made the most of a second opportunity to put France up 1-0. He is now France's all-time leading goal scorer.

A one-goal game in the second half, Poland tried to get Robert Lewandowski to equalize however two late strikes from Kylian Mbappe ensured France moves on. Lewandowski, meanwhile, scored a consolation penalty in injury time.

New updates on Sunday report Canadian midfielder Ismael Kone, 20, is set to make the jump to Europe and sign with Watford becoming the next Canadian to make a move after impressing at the 2022 World Cup alongside Alistair Johnston.

Top-ranked Brazil is still sweating Neymar’s fitness ahead of its Round of 16 clash with Senegal on Tuesday. Head coach Tite admitted the Paris Saint-Germain star will train ahead of the game but it has not yet been decided whether he will play.

After the United States’ elimination again the Netherlands, no CONCACAF country remains at the World Cup and head coach Gregg Berhalter strayed from answering questions about whether he will continue to be in charge of the team.

And in case you missed it, CTVNews.ca has a breakdown of the winners and losers from the group stage after some teams made heartbreaking exits while others surprised the world to stay alive in the competition.

The action continues of Monday, with four more teams looking to stay alive.