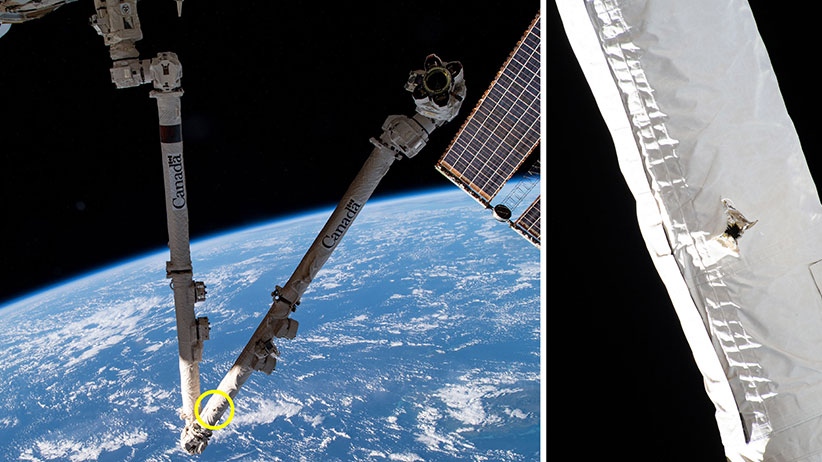 The Canadarm2, the Canadian-made robotic arm used on the International Space Station, suffered “limited” damage after it was hit by space debris last month.

According to a news release from the Canadian Space Agency (CSA) on May 28, astronauts noticed the arm had been damaged during a routine inspection on May 12. The impact occurred on one of the arm’s boom segments, which connect the joints of the arm.

“Despite the impact, results of the ongoing analysis indicate that the arm's performance remains unaffected,” CSA wrote in the release. “The damage is limited to a small section of the arm boom and thermal blanket. A hole approximately 5 (millimetres) in diameter is visible.”

The CSA added that the Canadarm2 is continuing its planned operations.

According to the space agency, there are 23,000 objects the size of a softball or larger that NASA tracks around the clock to avoid collisions, but sometimes smaller objects go undetected.

“The threat of collisions is taken very seriously,” the CSA wrote in the release. “NASA has a long-standing set of guidelines to ensure the safety of Station crew. The safety of astronauts on board the orbiting laboratory remains the top priority of all Station partners.”

There are an estimated 934,000 pieces of debris orbiting the Earth that are larger than one centimetre in diameter and each poses a serious risk to astronauts and active satellites.

In April, four astronauts onboard SpaceX’s Crew Dragon capsule were ordered into their space suits shortly after entering orbit on the way to the ISS due to a threat of incoming space debris. The incident was a false alarm.

Astronauts were forced to move the ISS 25 times between 1999 and 2018 due to incoming debris.