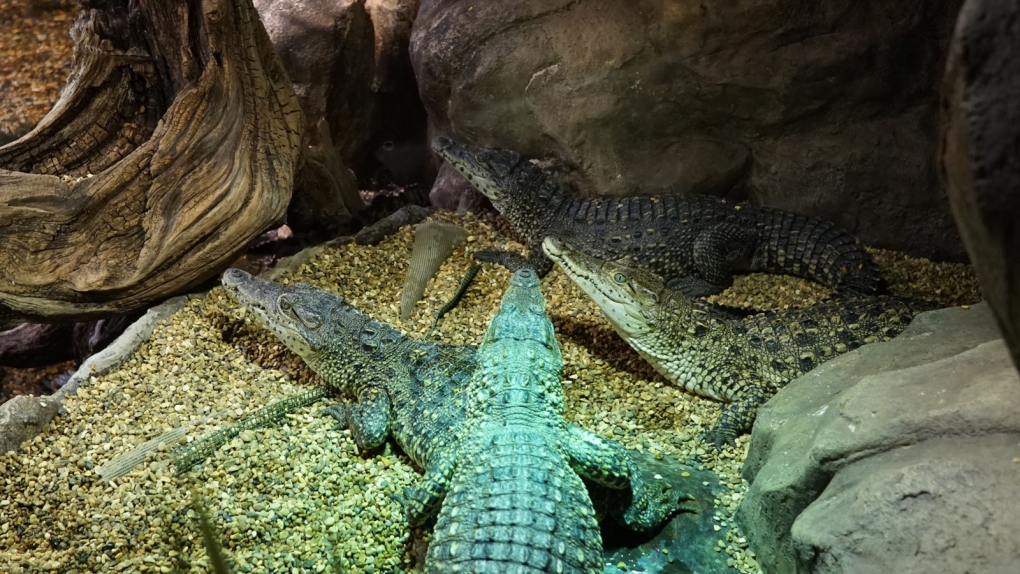 Baby Cuban crocodiles rest inside their enclosure at the Skansen zoo and aquarium in Stockholm, Wednesday April 15, 2015. (AP / David Keyton)

STOCKHOLM -- Cuba's efforts to sustain the critically endangered Cuban crocodile are getting a boost from Sweden, home to a pair of reptiles that Fidel Castro gave to a Soviet cosmonaut four decades ago.

A Stockholm zoo on Sunday is sending 10 of the couple's children to Cuba, where they will be placed in quarantine and eventually released into the Zapata Swamp, said Jonas Wahlstrom, the zookeeper who raised them.

"It's the dream of any zoo director to be part of releasing animals into the wild," said Wahlstrom, 62, clutching one of the stout-legged youngsters outside its enclosure at the Skansen aquarium and zoo in Stockholm. The 10 crocodiles each are about 1 1/2 years old and a metre long.

The Cuban crocodile, once found across the Caribbean, is restricted today to two swamps in Cuba, where it is threatened by interbreeding with American crocodiles, habitat loss and illegal hunting.

Wahlstrom said he received his original couple during a 1981 trip to Moscow. They had ended up in the Soviet capital after Castro gave them to cosmonaut Vladimir Shatalov in the 1970s as a token of friendship between the communist nations.

"He (Shatalov) brought them back to Moscow and he had them in his flat until his wife said: 'No more!' And then he had to give them to the zoo in Moscow," Wahlstrom told The Associated Press.

But the zoo officials didn't have a good space for the aquatic reptiles so they asked Wahlstrom if he could take them to Sweden.

"I had them as my hand luggage back from Moscow," Wahlstrom said.

Zoo officials in Moscow confirmed the background of the crocodiles and their handover to Wahlstrom.

Later named Hillary and Castro -- in a nod to international politics -- the two crocodiles have become a star attraction at Wahlstrom's zoo, where they have been breeding since 1984.

Wahlstrom said he's sent hatchlings to zoos worldwide, but this is the first time he's given any to Cuba for introduction into the wild.

"We need this type of crocodiles," Cuban Ambassador Francisco Florentino said as he inspected the animals before their departure Sunday.

With only about 4,000 animals remaining in the wild, the Cuban crocodile, or Crocodylus rhombifer, is red-listed by the International Union for Conservation of Nature. The population is restricted to Cuba's Zapata Swamp and the Isle of Youth.

This would be the first time that Cuban crocodiles raised abroad are introduced into the wild in Cuba, according to Natalia Rossi of the Wildlife Conservation Society. She's been involved in other efforts to protect crocodiles in the Caribbean island nation but not the Swedish project.

However, the crocodiles first would be genetically screened to ensure that they come from a pure breed, Rossi said.

Wahlstrom said he was sure his crocodiles were pure Cubans and expected them to adapt quickly to the real world.

"A crocodile is always ready for the wild," Wahlstrom said. "They are always aggressive."

As if to emphasize his point, the baby croc he was holding briefly writhed out of his grip and snapped at an AP journalist's jacket.