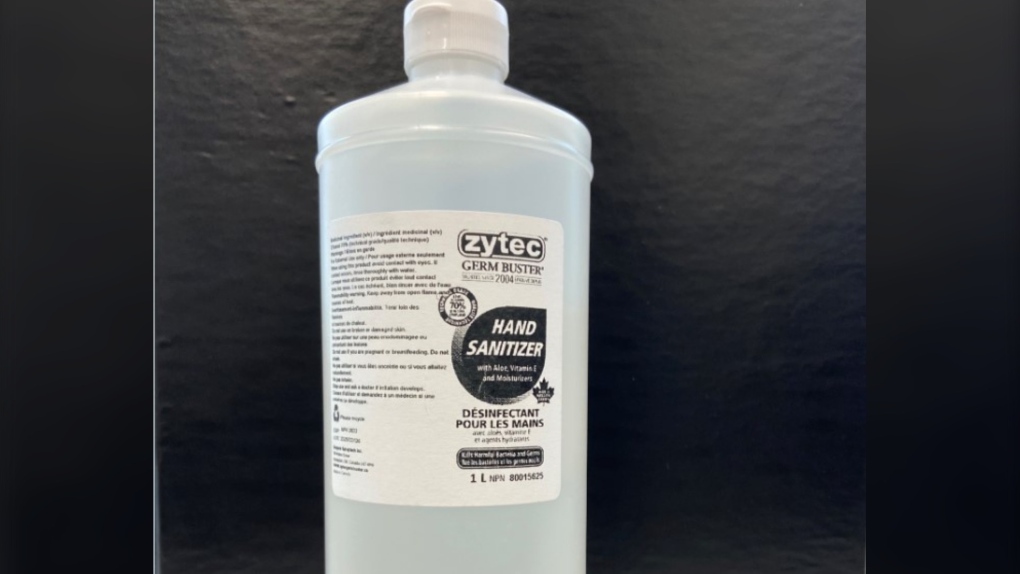 TORONTO -- Health Canada says it has announced a recall after discovering a company selling a counterfeit version of one of the hand sanitizers on its approved list.

In a release Thursday, the agency says they had become aware that the distributor Northern National Sales Inc. was selling a fake version of Zytec Germ Buster Hand Sanitizer.

Health Canada says it worked with Emback Spraytech Inc., the company behind the authorized product, in order to make sure the counterfeit version was not one of theirs.

As the demand for hand sanitizer grew early on in the pandemic, Health Canada released a list of approved hand sanitizers that met the government’s requirement for sale in Canada, in order to ensure that consumers would not be taken in by products claiming to be hand sanitizer that did not match up to regulations.

Zytec Germ Buster Hand Sanitizer is authorized for sale in Canada, but officials say the counterfeit version claiming this name is not. Health Canada states that they had reached out to the distributor of the counterfeit and instructed them to recall the product.

“Counterfeit products may contain ingredients not listed on the label, dangerous additives or other contaminants,” Health Canada says in the recall. “In addition, they may not contain the active ingredients Canadians would expect them to contain. Since the counterfeit Zytec Germ Buster Hand Sanitizer is unauthorized and made with an unknown formulation, it may not be effective at killing bacteria and viruses, and may pose serious risks to health.”

So, if you’ve purchased some Zytec Germ Buster Hand Sanitizer recently, how can you tell if you’ve got the real version?

However, the real product has a colour label, and the version with those two numbers only comes in 3.78 litres, while the counterfeit version has a black and white label and uses those numbers on a one-litre bottle.

Health Canada says anyone who possess the counterfeit version should stop using it immediately, and contact health-care practitioners if you have used it and are feeling concerned about your health.

Northern National Sales Inc. has confirmed that they are no longer selling the product, according to Health Canada.