OTTAWA -- Under the current public health measures up to 44,000 Canadians could die from COVID-19 in the months ahead. However, federal modelling shows the death rate could skyrocket if efforts stopped.

Speaking to these projections during his daily address on Thursday, Prime Minister Justin Trudeau said keeping the number of deaths as low as possible depends on what each person does now, but it will “take months of continued, determined effort.”

Federal projections released by Health Canada detailed the overall best- and worst-case scenarios for the pandemic’s spread and impact in Canada, varying on the degree of actions taken by governments and Canadians.

Referencing the data, Trudeau said the peak of cases in Canada may come in late spring, with the end of the first wave in the summer.

“We have the chance to determine what our country looks like in the weeks and months to come. Our healthcare systems across the country are coping for the time being, but we’re at a fork in the road, between the best and the worst possible outcomes,” Trudeau said. “The best possible outcome is no easy path for any of us.”

“There will likely be smaller outbreaks for a number of months after that. This will be the new normal, until a vaccine is developed,” he said, adding that some estimates show that some level of public health measures could be needed for the next six to eight months, or for as long as a year and a half.

Trudeau said this, coupled with more than one million jobs being lost in March, is obviously “difficult news.”

The prime minister also said that the work underway to develop more sophisticated testing and contact tracing is going to improve the global grasp on the virus that’s kneecapped global economies and changed how societies act.

The scenarios indicate that, depending on the containment efforts, between 4,000 and 300,000 people in Canada could die from COVID-19 over the course of the pandemic. Though, the current reality of the virus has Canada closer to the lower end of that spectrum and the two more developed scenarios from Health Canada under the current strong measures show that the range is likely somewhere between 11,000 and 22,000 Canadian deaths.

The short-term federal projection on the spread of COVID-19 shows that between 500 and 700 Canadians could die from COVID-19 by the next week, with the number of cases rising to between 22,580 and 31,850 cases.

With no control efforts in place, up to 80 per cent of Canadians could contract the virus. That scenario could result in a summertime peak and more than 300,000 deaths, which is approximately equivalent to the total number of deaths from all causes in Canada each year.

Health Canada says the current pandemic parameters Canadians are living under are considered strong controls, such as physical distancing, and quarantining travellers, whereas if fewer people stay home or do not act like they could be carrying the virus there will be a weaker hold on the disease.

The data and modelling released Thursday is informing the current national public health measures in place to combat the spread of the novel coronavirus.

Chief Public Health Officer Dr. Theresa Tam called the numbers "stark," but cautioned that these possible scenarios are imperfect given the different regional epidemics, and the outcomes will ultimately be determined by Canadians' actions.

Tam said that means everything that can be done, must be done, to keep Canada's trajectory within the range of best-case scenarios, "despite all the hardships and cost."

Tam said that community transmission in Canada started later than in other countries, our per capita testing rate is higher than most countries, and the increase in total number of cases has been slower here than in other nations.

“In the last weeks a lot has been done, and we will need to monitory every single day the evolution of the outbreak and the trajectory so we can recalibrate as needed,” she said. 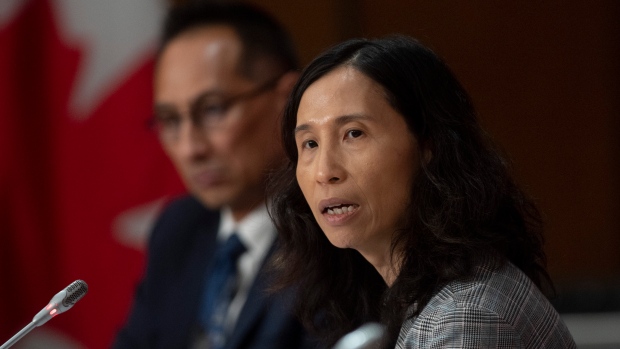 Under all scenarios the peak appears to be coming sometime between late spring and early fall.

Deputy Chief Public Health Officer Dr. Howard Njoo said it appears that the first wave of the virus will last until the summer, and "that won't be the end."

He said it’ll be up to each region of the country to monitor their curves and change their local public health approach accordingly.

As Trudeau echoed, Health Canada cautioned that in the absence of a treatment or vaccine, the fight against the disease is likely going to require waves of epidemic controls, spanning months.

For example, Canadians could still be instructed to distance themselves from others and practise hand hygiene; international and domestic travel restrictions could remain in place; and incoming travellers could face mandatory 14-day isolations.

Calling the potential second and third resurgences of the novel coronavirus that could come before a cure is found “wavelets,” Trudeau said Canadians will be “much better equipped” to handle them.

“We will have developed both tools and habits that will allow us to be much more resilient and resistant to further outbreaks and spreads,” Trudeau said.

Also playing a factor in the scenarios is the increase in health care capacity, from stocking up on lifesaving supplies like ventilators, to having enough workers able to respond to the surge of patients.

Prior to physical distancing and other steps being taken, Health Canada estimates that each infected person in Canada passed the respiratory disease on to more than two people on average, but that has since been decreased, but we have not yet reached the point of stopping all spread.

Several provinces have already released their best- and worst-case projections for the number of deaths and cases, as well as how long they estimate it will take to contain the virus that's already infected more than 20,000 Canadians and killed more than 500 people nationwide.

Facing questions about how Canada ended up a month into a global pandemic with months ahead of us and thousands of deaths expected, Trudeau said countries around the world were “caught off guard” by COVID-19.

“The challenges that we've faced in terms of getting Canadians protected are echoed in challenges faced around the world, and some countries are handling it better than others… And of course, there'll be lots of lessons learned from this,” the prime minster said.

“I think we all know that this was a situation that we're adjusting as best we can to. We took the advice of experts, we move forward in significant ways. As we look back at the end of this I'm sure people will say: ‘Oh you could have done this a few days before, or maybe you did this one too quickly and you could have taken a few more days to reflect on it.’ Every step of the way we make the best decisions we can, given the information we have. And if it's not exactly right, we fix it and we try and get it better as we move forward.”

Evoking war-time language, and noting that Thursday marks the anniversary of the start of the First World War battle of Vimy Ridge, Trudeau said Thursday that things will get better, but first Canadians will have to sacrifice and do what can be done to prevent as many deaths as possible.

Almost 3,600 Canadians died during this battle, and more than 7,000 were injured.

“As historians have noted reflecting on Vimy, it was a moment ordinary people did extraordinary things… And their legacy lives on in our women and men in uniform who are there for us in times of need, in our nurses and doctors who put themselves in harm’s way for us all to stay healthy, in everyone who steps up, and asks what they can do for their fellow Canadians,” Trudeau said.

“That’s what makes Canada strong. And that will always be our path forward, no matter what tomorrow may bring.”

Speaking during the daily ministerial update following Trudeau’s remarks, Deputy Prime Minister Chrystia Freeland said that she knows the information presented could frighten people, but she hopes that Canadians also “feel empowered” by it.

“What that data says to me, is we need to do what we are doing. And that while the physical distancing actions that we are all taking in our daily lives are hard… and it's really hard to lose your job because of it. Terrible,” Freeland said.

“Having said that, to me what the numbers show what the data shows, is we're on the right track. And it is in our power as Dr. Tam just said to achieve that ambitious aspirational target, we can all do it. We are all a part of it. So turn that very understandable legitimate fear into power and a conviction that we all need to do this hard thing to get the best possible outcome for Canadians."