TORONTO -- New preliminary research suggests that while two metres of physical distancing is enough to protect those who are standing still, wider berths may be needed when walking, running and cycling.

The research did not directly assess the coronavirus that causes COVID-19 and has not been tested by a peer review. However, the group of Belgian and Dutch researchers said they posted their white paper online because they decided “it would be unethical to keep the results confidential and keep the public waiting months for the peer review process" given the urgency of the COVID-19 pandemic.

By simulating the movement of saliva particles discharged during various physical activities, the researchers suggest that droplets can in certain circumstances travel far beyond the recommended span of physical distancing via slipstreams, which are created when a moving person pulls air along with them.

This is problematic because droplets are known to be a transmission method of the novel coronavirus that causes COVID-19. It means that even those adhering to physical distancing protocols might unwittingly be spreading the virus while exercising outdoors.

"If someone exhales, coughs or sneezes while walking, running or cycling, most of the microdroplets are entrained in the wake or slipstream behind the runner or cyclist," Bert Blocken, the civil engineering professor who led the research team, said in a newly published white paper.

"The other person who runs or cycles just behind this leading person in the slipstream then moves through that cloud of droplets." 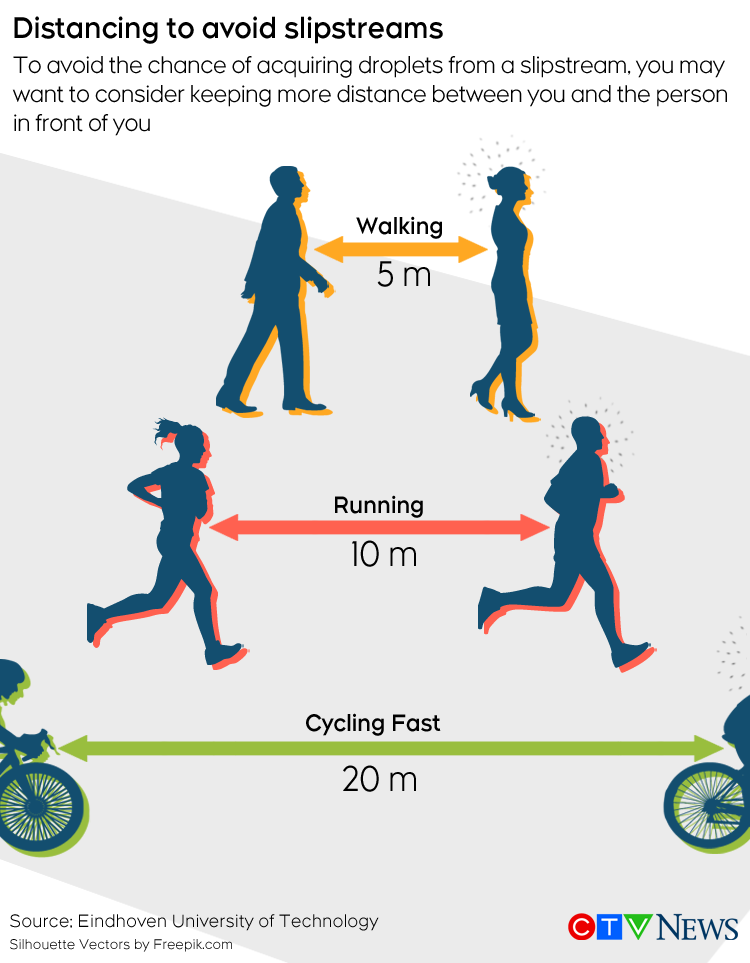 To avoid any chance of being hit by droplets in a slipstream, the researchers recommend that walkers stay at least four to five metres behind the person ahead of them, runners and slow cyclists keep a 10-metre distance, and fast cyclists leave 20 metres of physical distancing space.

But questions have been raised about the research and the accelerated timeline on which it was released. The report has not been published in a scientific journal or peer-reviewed, which means the research methods have not been tested by outside experts. Even so, images of the simulations have been widely shared on social media.

Dr. Bonnie Henry, B.C.'s provincial health officer, has said infection through contact with droplets from a passing runner or cyclist "would not be a common way" for the virus to spread.

Speaking Tuesday at a press conference in Victoria, she said the virus, like most viruses, finds it more difficult to spread outdoors and droplets from passersby quickly fall to the ground.

"Having somebody run by you is a very unlikely way that this would ever be transmitted," she said.

Blocken and his team used a simulation based on a model used in the training of elite runners and cyclists, who try to gain an advantage during races by exploiting their competitors' slipstreams and reducing the air resistance they face.

When it comes to a potentially deadly virus that can be spread through slipstreams, though, the danger far outweighs the benefits.

"We have seen that no matter how that zone forms, droplets end up in that air stream," the researchers wrote.

Keeping more distance isn't the only way to potentially avoid contracting the coronavirus from droplets left in a slipstream. The researchers noted that if two people are walking, running or cycling side-by-side, the droplets fall behind them without hitting the other person. The same thing happens if the two are staggered in a diagonal position, provided there is no cross-wind.

"The risk of contamination is greatest when people walk or run closely behind each other and therefore in each other's slipstream," Blocken said.