This past weekend, Dr. Andrew Boozary helped administer COVID-19 shots to people who lined up around the block at a vaccine clinic in the hard-hit neighbourhood of Jane and Finch in Toronto.

“It couldn't speak more powerfully to the demand that is there in the community [and] in the streets from people,” Boozary told CTVNews.ca in a phone interview on Monday. Lower-income, often racialized communities have been hardest hit with COVID-19 cases throughout the pandemic.

“The neighbourhoods have been set on fire through no fault of their own,” he said, adding that in his view, they have been “betrayed during the entire pandemic.”

Boozary, who is also the executive director of social medicine and population health at the University Health Network in Toronto, joins the chorus of medical professionals advocating for better patient care and vaccine access equity for those living in hard-hit areas.

This push is bolstered by studies that show prioritizing vaccines for essential workers does more to stop the spread of COVID-19 than simply offering shots based primarily on age.

Saskatoon ICU physician Dr. Hassan Masri said many provinces’ approaches run counter to what happened in the first phase of vaccinations, where vaccines went to populations with the highest death rates. At the time, it was mostly older Canadians living in long-term care homes.

“We went and we said, ‘OK, we are going to target the people who are getting sick and we got to give them the vaccine,’” the professor of medicine at the University of Saskatchewan told CTVNews.ca in a phone interview. And he said that there were fewer “non-racialized individuals” among this group compared to those living in many hot spot areas today.

Boozary and his colleagues say it can be a form of systemic discrimination that not enough vaccine clinics and pharmacies are set up in hot-spot areas. The Ontario doctor said it’s desperately needed in provinces like his, because there’s clearly desire in these places.

“When opportunities are there for life-saving measures like the vaccine, we saw this historic turnout,” he said referring to the more than 3,200 who showed up at the Jane and Finch pop-up clinic this past weekend.

Over 3,200 more people in Jane-Finch afforded some protection with #COVID19Vaccine this weekend thanks to advocacy and teamwork @drandrewb, Angela Robertson @PQWCHC #TeamVaccine. Grateful to our healthcare, community workers, volunteers and community members❤ https://t.co/wxm2S9Pq9D

on and on community vaccine @BlackCreekCHC — need more resources/supports to where people are at. pic.twitter.com/47AB4wgfIT

But it also exists across the U.S. and Canada more generally, and it shows up more often within rural and low-income communities.

“Any degree of blaming and shaming or generalizing other people. I don't think it’s fair,” Katrina Plamondon, assistant health and social development professor at the University of British Columbia’s School of Nursing told CTVNews.ca in a phone interview on Tuesday.

agreed. stop using the word 'hesitancy' and call it what it is... well developed and justified mistrust. do your part to disrupt the systemic racism that created the mistrust. #DoYourPart #COVID19NS https://t.co/OotBlDXnZI

Reports of rare but serious blot clots in those who have taken vaccines from AstraZeneca and Johnson & Johnson have created a level of hesitancy for Canadians across the board, according to doctors who spoke to CTVNews.ca. But they noted one particular group appears to be taking advantage of its ability to refuse these vaccines.

Front-line workers told CTVNews.ca that it’s in affluent areas and neighbourhoods they’re now seeing more of the phenomenon of “vaccine shopping,” where people are looking for clinics offering Pfizer or Moderna vaccines instead of AstraZeneca.

Boozary called it a “tale of two pandemics” where more affluent workers -- who can continue to work from home -- might feel their “risks aren't all that high and they're not all that immediate.”

And so, they may feel they have “got time to shop around for a brand,” he said. “But when you have no choice but to be in an unsafe workplace [and] don't have the economic and social protections… you're not going through that same calculus. You're not waiting on a brand of choice.”

Masri in Saskatoon adds onto this, saying racialized, essential workers also face an added pressure to get vaccinated because they’re worried about the older relatives living with them.

In communities of colour, families from different generations live together at much higher rates, in some cases nearly double that of white families.

According to Victoria-based family physician Dr. Amy Tan, this vaccine shopping trend is also happening outside Toronto. She said that when people hold off on getting the first vaccine that’s offered to them, it means they risk exposing others who might not have been offered anything yet.

“That person is walking around unprotected not only for themselves but [putting at risk] the grocery store worker,” she told CTVNews.ca in a phone interview on Tuesday.

Tan added that, by contrast, most essential workers in hot spot areas are willing to get vaccinated, but just want to know the vaccine is safe and if they’ll be given time off to get the vaccine.

VACCINE SHOPPING TAKES AWAY SHOTS FROM OTHERS

Although Masri in Saskatchewan hasn’t seen as much vaccine shopping happening there, he said it’s far more likely to happen among people with the financial means to do so.

He called the practice “extremely damaging.” The Ontario College of Family Physicians echoed that, posting a message urging people not to look for their “preferred” vaccine.

Since the AstraZeneca vaccine was only available to people over 55 until recently (with the age limit recently dropping in several provinces) people in that older demographic have had more choice than younger people.

“I find it very bizarre,” B.C. health equity expert Plamondon said. “The chances of anybody remembering what the brand for their measles, mumps and rubella vaccine [or flu vaccine] is pretty low.” 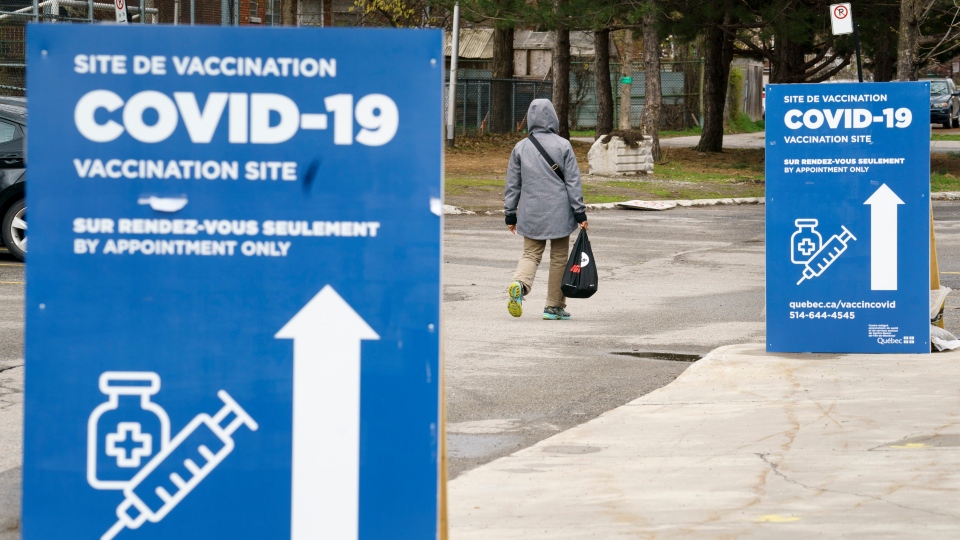 A person walks towards a COVID-19 vaccination clinic in Montreal, Tuesday, April 20, 2021. THE CANADIAN PRESS/Paul Chiasson

She said she isn’t surprised by what front-line workers are seeing, because the privilege to shop around is a smaller-scale version of what’s happening on an international level.

Countries in the global north such as Canada, the U.S., and the United Kingdom have more access to different vaccines and therefore more choice -- as opposed to the global south, where entire countries only have access to one or two vaccines, Plamondon explained.

“What we know is that all of the options that are available and approved for Canada, all of them will do an amazing job of protecting us from getting very sick, needing hospitalization or even death,” Plamondon stressed.

LACK SHOWS UP IN OTHER WAYS

While doctors suggested lineups in hot-spot areas indicated a lack of resources, Plamondon said that scarcity also shows up in other ways.

In some B.C. neighbourhoods, there haven’t been enough government resources allocated for outreach to marginalized groups such as homeless Canadians, she said. And for her, an example of this is how clinics aren’t being set up in enough shelters and how they’re instead set up in churches where some have felt discriminated against and they may not be as inclined to get jabbed there.

Other ways are evident in provinces failing to give paid sick days or not setting up clinics near or around sites for outbreaks such as factories and warehouses, she said, which other doctors have echoed before.

"Prioritize those of us who can’t work from home to get the vaccine," says Jamar, Unifor Local 222 member. He who works every day to make sure there is food on your table. He also needs paid time to get vaccine and paid sick days.
Sign petition: https://t.co/hyIGhlfgL0 #canlab pic.twitter.com/g1OfwiEVxg

Maria Sundaram, a postdoctoral fellow at the University of Toronto’s Dalla Lana School of Public Health, said if there is any slow uptake among racialized, front-line workers, it’s because provinces haven’t done enough in terms of being given paid time-off to get vaccinated, or other workplace protections.

“They're concerned about whether they'll be eligible to go to work the next day because they might have a low-grade fever as a result of being vaccinated. And it’s not clear that the support [from employers] is there,” she told CTVNews.ca in a phone interview on Monday.

Sundaram said failing to address these issues is now responsible for the “death by a thousand paper cuts” in at-risk communities.