“People with disabilities are just an afterthought, if we’re thought of in any way regarding this pandemic. And vaccines are no different,” said Jewelles Smith, the government relations co-ordinator for the Council of Canadians with Disabilities. “It’s distressing.”

Smith, who prefers the term "disabled woman" for herself, said governments are only focused on those in congregant care, or older Canadians who may be disabled.

In B.C., for example, those with intellectual disabilities in group homes were among some of the first vaccinated.

“But there’s [no] consideration of those of us living in the community, those of us requiring personal support workers or attendants or other family members to provide care,” Smith, who has severe Anaphylaxis, told CTVNews.ca. “There doesn’t seem to be a clear plan.”

She said that disabled people like her friend, who uses a wheelchair, are at higher risk because of their increased interactions.

“Many of us live with conditions that put us at higher risk of getting COVID or [are] put us at risk because of the number of humans we encounter,” she said, noting that her friend,who uses a wheelchair, doesn’t even leave the house.

From the attendant who helps her get ready, to the bus driver who straps her in, to the grocery store attendant -- each interaction carries a risk. So getting the vaccine first would mean not relying on others to be safe.

When it comes to provincial rollouts, Smith said disabled people, in general, aren’t explicitly included in the first wave of vaccinations. In Ontario, for example, adults with developmental disabilities are part of the second stage of vaccinations, which might not be until March at the earliest.

“I don’t know when I’m going to be able to go out in public again,” Smith said.

U.S. data last year found that in two states, people with intellectual disabilities and autism spectrum disorder died from COVID-19 at higher rates than other people. Other studies found that disabled people in the U.S. and U.K. were two-to-three times more likely to test positive and die from COVID-19. But when it comes to Canada, studies examining COVID-19 and its impact specifically on disabled people are scarce.

And that lack of disaggregated data was criticized by a Winnipeg-based disability activist.

LACK OF DATA IS DEADLY: RESEARCHER

“This statistical dearth is setting the stage for a vaccination rollout that will leave many vulnerable people behind,” disabled activist and graduate researcher Megan Linton said in a piece she co-wrote for the left-leaning publication Canadian Dimension.

“And since we don’t have that data, it will lead to a lack of protection specifically for disable people,” Linton, whose research interests include the intersection of institutions and disabilities, told CTVNews.ca in a phone interview on Monday.

She said giving disabled people priority access is something activists in Canada, the U.S., the U.K. and Australia have been urging for months. And Linton said the factors for vaccine prioritization shouldn’t just be a person’s age or whether people live in communal spaces.

“Disabled people have been forgotten consistently throughout the pandemic so it’s not surprising that in the vaccine rollout we were forgotten,” Linton said.

Along with disabled writer Allen Mankewich, in her piece she outlined a number of other issues facing the disability community, including Quebec’s and Ontario’s clinical triage protocol which advocates argue are ableist, or proposed changes to the Health Care Consent Act, which they argue don’t put disabled people in full control of their own care.

"We're being left to die. Our lives have been deemed not worth saving for almost a year now and I think it's exhausting," Linton said, who called her community’s situation "devastating."

Linton also noted in her piece the lack of increase to provincial disability supports, which she calculates is $1,350 in Ontario, $1,093 in Manitoba and $1,182 in B.C., despite the Canada Emergency Response Benefit being set at $2,000. A fact other activists have previously called out. 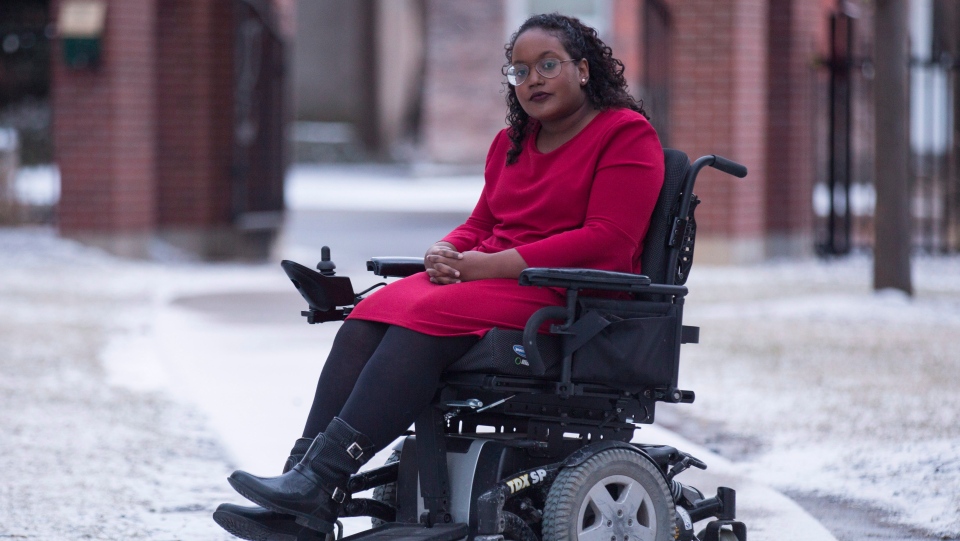 Sarah Jama, a disability justice advocate who has cerebral palsy, poses for a portrait at her home in Hamilton, Ont., on Tuesday, March 13, 2018. THE CANADIAN PRESS/Peter Power

Sarah Jama, the co-founder for the Disability Justice Network of Ontario, echoed Linton. She said she wasn’t surprised by the lack of prioritization for disabled folks.

“People with disabilities are being shown through legislation that they are not valued by all levels of government in Canada, and have been and will be left to die as an outcome of this pandemic,” Jama, who also prefers the term “disabled person,” told CTVNews.ca over Twitter.

But all of these issues, including early access to the vaccine, are deeply compounding for disabled people.

As for whether the federal and provincial governments take action, Smith said she’s naturally optimistic but is “incredibly frustrated at all of the responses.”

She recalls back in 2019 feeling hope her community would finally be listened to when the feds passed the Accessible Canada Act, which would give the government more authority to create new accessibility regulations.

“There was a moment in the community when we thought, ‘They’re actually thinking about us.’ And then this [the pandemic] happened. And from day one, there have been new barriers,” Smith said.

“The one thing we were holding out hope for was the vaccine and to hear we weren’t included in the plan was distressing, in the fullest meaning of the word.”

COVID-19 vaccine given to family of board members, non-frontline staff at Vaughan, Ont. long-term care home

Despite dip in cases, the U.S. is in the 'eye of the hurricane' as COVID-19 variants spread