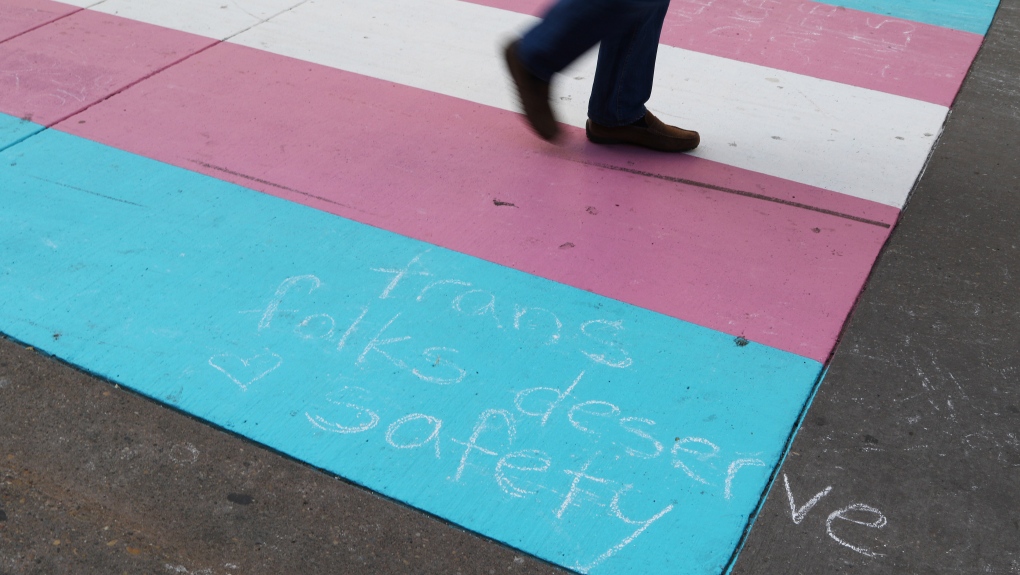 In this file photo, a person walks on a trans Pride flag crosswalk in Calgary on Sunday, Aug. 18, 2019. THE CANADIAN PRESS/Dave Chidley

TORONTO -- New insights from a national survey of transgender and non-binary people in Canada suggest that trans people of colour face more harassment, with almost three quarters reporting they fear harassment or scrutiny from police forces simply because of who they are.

Forty-five per cent reported having been harassed at some point at work or at school.

The report specifies that they used the term “racialized” to include “people and communities that experience racism.”

“Racialization can be conceptualized as ‘the process by which societies construct races as real, different and unequal in ways that matter to economic, political and social life,’” the paper stated, quoting the Ontario Human Rights Commission. The report clarified that their count of racialized trans and non-binary people includes those who identified as a person of colour as well as those who indicated on the survey that they were perceived as a person of colour.

Out of the 2,873 respondents who took the survey in 2019, 14 per cent identified as racialized -- a little over 400 people. The authors pointed out that barriers to accessing the survey or the possibility that many did not know about its existence mean that this cannot be taken as a true reflection of what percentage of trans and non-binary people are racialized.

While racialized and non-racialized respondents reported similar levels of mental health and issues getting health care, there were some marked differences.

When it came to being the target of violence or harassment, racialized trans and non-binary people were more likely to receive all forms of violence and harassment, reporting at least four per cent more than non-racialized respondents.

That gap widened depending on what type of violence or harassment the survey specified.

And a third of trans and non-binary people of colour reported having been sexually assaulted within the last five years, compared to a quarter of non-racialized trans people.

Trans people of colour were also eight per cent more likely to avoid religious institutions out of fear of harassment or being outed than non-racialized trans people.

One of the most significant differences between racialized and non-racialized respondents came when respondents were asked if they experienced worries about being stopped or harassed by police or security.

Feeling unable to trust the police can have direct ramifications for wellbeing and health. A quarter of trans people of colour said they had specifically avoided calling 911 for emergency medical services within the last five years.

Researchers said this was the first quantitative, all-ages data that has been compiled on racialized trans and non-binary people within Canada, and that the results highlight how racialized members of the trans community face high levels of discrimination, violence and “anticipated and actual negative experiences with police and the legal system.”

As with racialized people in the general Canadian population, racialized trans and non-binary people experienced profound levels of discrimination compared to their non-racialized peers,” the study stated.

One racialized participant of the survey, who was not identified in the paper, was quoted as saying they are “hoping this [study] will shape change to uphold the full humanities of trans femmes and trans women … I see white, trans femmes experience life with so many more options for their survival than those of us who are racialized.”