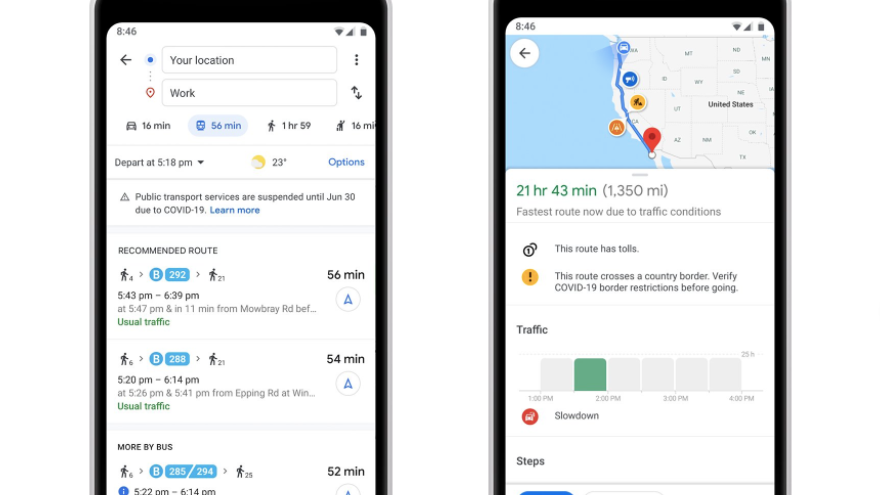 These images show some of the ways Google Maps may appear differently on phones after users have updated and have access to new features. (Google)

TORONTO -- Google Maps has launched new features due to COVID-19 that will alert users of any travel restrictions on their planned route and allow users to submit data showing when a transit line is crowded or not.

More and more Canadians are making journeys outside of their homes as provinces re-open, but with pandemic guidelines such as physical distancing still in place, the question of how to navigate public transit safely is an important one.

“Commuters no longer just have to think about how they can get there quickly and comfortably, they have to take into account whether they’ll be able to properly social distance, or if there are restrictions along their route that will impact their trip,” said Luiza Staniec, a Google spokesperson, in an email to CTVNews.ca

According to a blog post from Google, the new features are coming in updates for Android and IOS this week and will help commuters make informed choices on how to travel, whether it’s by car or public transit.

For those thinking of heading out on a road trip, Google Maps will now post alerts if the travel route you have entered into the app crosses through an area with COVID-19 restrictions.

“As provinces begin to reopen and people start making travel plans, even within Canada, some routes remain restricted,” Staniec said.

“Our checkpoints and border restrictions alerts will help travellers avoid [the] stress and frustrations of not being able to get to their final destination.”

Potentially the most useful upgrade pertains to the question of how to stay physically distant while using public transit.

Google Maps introduced a “crowdedness” feature in 2019 that showed when a transit line was particularly busy, but now the company says it has made the feature broader and easier for users to contribute information.

Now, when users plot out a route to get from A to B on Google Maps, after they click on a route, they can find a “Crowdedness” button with a plus sign next to it that will allow them to rate the bus, streetcar or subway route. Choices range from “Not crowded (there’s lots of seats)” to “Full (not picking up passengers).”

This means commuters will be able to use the app while on a bus or streetcar to let others know that it’s a low traffic time and safe to use, or whether it’s more packed and potentially more risky.

Users will also be able to see not just how crowded a specific line or route is, but how busy a specific transit station is at any given time. You will be able to view a graph showing when a station has been reported to be the busiest, in order to help you avoid the crowds.

This busyness data is based on averages, not minute-to-minute updates.

“Popular times, which show busyness at places like a transit station, is a historical look at average popularity over the last several months,” Staniec explained. “When available, live visit data shows how busy a location is right now compared to its usual level of activity.”

All data input by commuters will be anonymized, according to Google’s blog post, and live visit data will only be posted when enough people have contributed to the data that it can provide a general picture and satisfy privacy requirements.

Not everyone can choose when they need to hop on the bus to head to work, but Google says the update will allow those who can plan ahead for specific trips to avoid times of day when the subway is going to be the most packed.

Staniec said that “like other tools that help people get around and get things done in the world, we’ve certainly seen usage of Google Maps change in the midst of COVID-19’s impact on mobility.

“Not surprisingly, when cities go into lockdowns we see less need for navigation, but as places reopen, we start to see that need pick back up.”

She added that they are seeing an increase in other usages of Google Maps, such as consumers using their local information “to find whether a store nearby is open or whether their favourite local restaurant is offering takeout.”

Ontario released guidelines Thursday for commuters to stay safe on transit, highly recommending the use of face masks while on public transit and promising to install safety dividers on GO trains and buses, among other measures.

While Google’s most recent Community Mobility Report from June 5 shows that Canadians are still traveling to retail, transit stations and workplaces much less than before the pandemic, travel to parks and beaches has jumped by 100 per cent.

And travel to transit stations appears to be steadily increasing across all provinces.

Some of the new Google Maps features have not reached Canada yet. A press release said that pop-up alerts with information on COVID-19 testing sites for travellers attempting to plot a route to one will be coming to Canada soon.

How to know if you're 'doomscrolling' and why you should stop

P.E.I. will move to phase four of province’s reopening plan on June 26