Eviction bans stop COVID-19 spread and should be in force Canada-wide, advocates say

TORONTO -- Public health and housing advocates are demanding the return of eviction bans across Canada and feel their arguments are bolstered by a new study that found the policy stopped the spread of COVID-19.

The study, published on April 15, found that eviction bans significantly cut down on the COVID-19 infection rate, protecting not only those who otherwise would have lost their housing, but also entire communities.

People who were evicted and the households that took them in had a 1.5-to-2.5-fold higher risk of being infected than if eviction bans were in place, researchers at Johns Hopkins University and the University of Pennsylvania found.

Although many provinces enacted eviction bans early on in the pandemic, by autumn 2020, most of those provinces rescinded those policies, according to Canada Mortgage and Housing Corporation.

But many public health and housing advocates argue that lifting those eviction bans has left many people vulnerable -- particularly essential workers, who are often racialized, live in COVID-19 hotspots and live paycheque to paycheque.

“We’re failing on the human right to housing and on public health,” said Dr. Andrew Boozary, executive director of social medicine and population health at the University Health Network in Toronto, who cited the staggering number of eviction arbitration cases in Ontario alone.

Lifting eviction bans effectively took away a strong safety measure from vulnerable people, Boozary told CTVNews.ca in a phone interview. He said bringing them back shouldn’t be such a point of contention.

“To think that this still needs to be contemplated or advocated for in a pandemic, I think just shows how much we've failed,” he said, calling evictions “very cruel drivers” to ongoing issues. “The real worry that so many of us on the ground are feeling is that we know that there is a whole wave of homelessness that is playing out right now.”

“You're driving people into congregate settings [or] into a shelter system that is already beleaguered and is already at capacity,” Boozary said, pointing to shelters being hotbeds of transmission as people there have no or limited options to physically distance or self-isolate.

'YOU'RE TERRIFIED YOU'RE GOING TO KILL YOUR MOTHER'

“I have met a few people who have lost their housing due to reduced income and employment and who have had to move in with others, which does seem to increase their fear of contracting the virus,” Milaney, a member of the school’s O’Brien Institute for Public Health, told CTVNews.ca in an email on Tuesday.

But Milaney, who also serves as an executive steering committee member for the Canadian Observatory on Homelessness, said more study needs to be done to determine the precise impact eviction bans have on COVID-19 spread.

“It’s eviction moratoriums, it’s very, very clear communication, working with communities to make sure that people understand the importance of testing and adherence to public health interventions,” the dean of the Dalla Lana School of Public Health at the University of Toronto said, while also calling for income support for people. 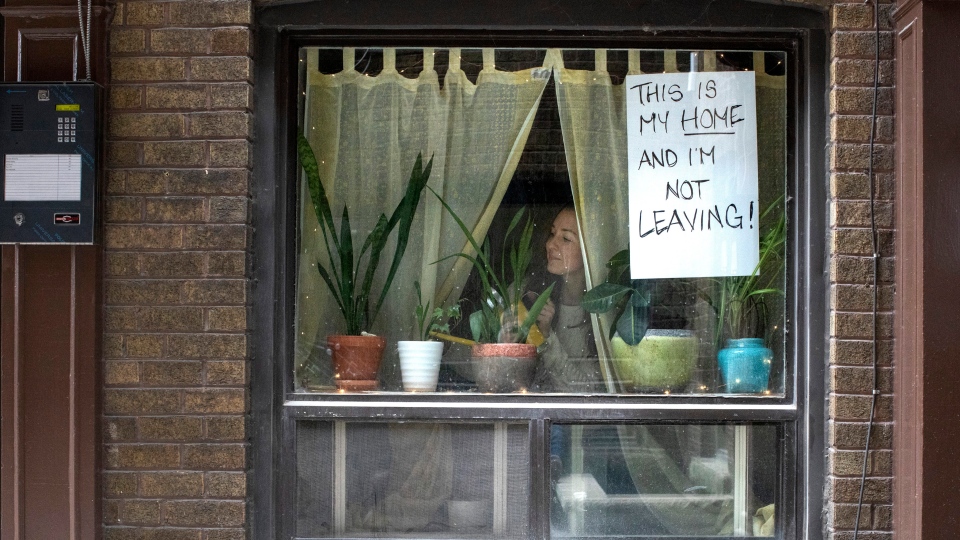 "Lee" is pictured at the window of her west Toronto apartment on Thursday March 19, 2020. THE CANADIAN PRESS/Chris Young

Boozary and other housing advocates said that without stable housing, at-risk families not only worry about an increased risk of COVID-19, but also the fact they’re entering an increasingly expensive housing and rental market.

“Because of the level of unaffordability in rent, you're seeing in one-bedroom apartments, six or seven people already living and now this is going to be expanded out,” said Samuel Nithiananthan, a member of People’s Defence Toronto, which organizes sit-ins and eviction legal defences for people across the city.

“You’re terrified you’re going to kill your mother,” he told CTVNews.ca in a phone interview, adding that many already worry about spreading COVID-19 and live in multi-generational homes filled with at-risk relatives.

“There’s a handful of people I know who quit their job because family members were immunocompromised.”

PEOPLE AT RISK OF COVID-19 TRYING TO PAY RENT: ADVOCATE

Nithiananthan said a lot of eviction cases he’s seen or heard of involve racialized essential workers who had been trying to pay their rent on time.

Because rent can eat up to 70 per cent of people’s gross income, according to ACORN Canada, Nithiananthan said people either end up going into essential work – where they can catch COVID-19 more easily – or they work but are unable to come up with enough money, lose their homes and end up being at risk of contracting COVID-19.

And anxiety of not making rent and catching COVID-19 aren’t the only fears tenants have. A survey of 400 renters last summer, conducted by the Vancouver Tenant Union (VTU) which represents 2,000 renter members in the city, also found that tenants reported having fears of going hungry and deteriorating mental health. 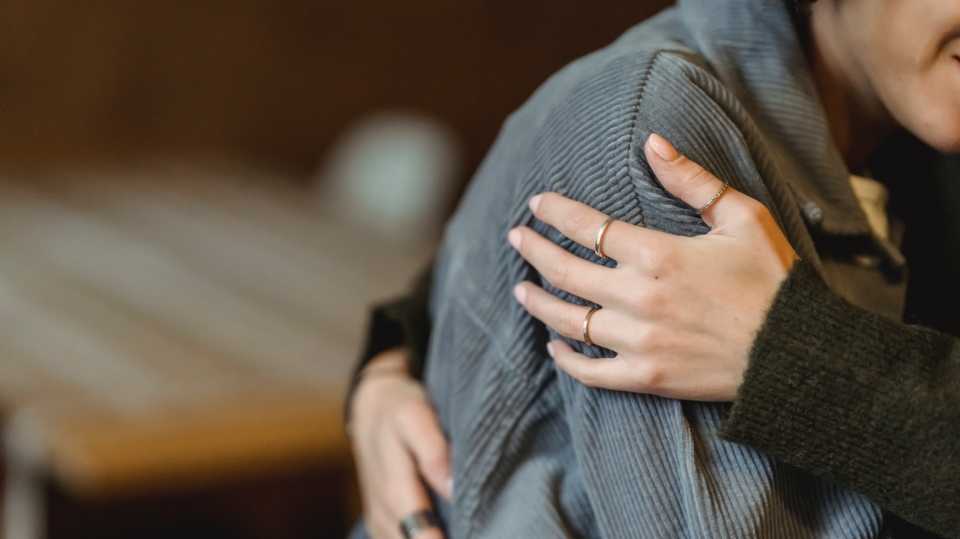 To lessen people’s worries and burdens, advocacy groups such as the VTU have been at the forefront of lobbying provincial authorities to bring back eviction bans since tenant-landlord boards began resuming eviction hearings last year.

“Studies in the U.S. showed that states that lifted the eviction ban early had over two times the incidence rate and over five times the mortality rate,” VTU spokesperson Mazdak Gharibnavaz told CTVNews.ca over email on Tuesday, citing an in-depth 44-state study from UCLA.

Yet despite that, Gharibnavaz said, there’s a “large amount of activity” at B.C.’s Residential Tenancy Branch, which weighs in on and resolves landlord-tenant disputes.

VTU, which includes lawyers among its volunteers, said there’s a backlog of cases, with some tenants being given eviction notices last month but no hearing dates until August.

Caryma Sa’d, a lawyer in the Greater Toronto Area who specializes in affordable housing and drug policy reform, said “to continue enforcing evictions is counterproductive.”

“Housing, at least in my observation, is a central puzzle piece to many other things, especially when you have a stay-at-home order,” she told CTVNews.ca in a phone interview on Monday, referring to Ontario Premier Doug Ford’s heavily criticized lockdown measures to stop the third wave.

Complicating the matter is that when Ontario’s eviction ban was lifted last year, what took its place were arbitration agreements through the Landlord and Tenant Board and repayment plans made in good faith between landlord and tenants.

But Sa’d called the framework “a trainwreck in slow motion.”

Instead of providing a cushion during hard times, Sa’d is aware of cases in Ontario where residents were “summarily evicted” if they were late with rent or came up short due to a lack of work shifts or as a result of lockdown measures.

For example, a bartender who worked out a repayment plan with their landlord because they thought they could reopen their bar this month could find themselves unable to pay rent when they were forced to shut down because of Ontario’s lockdown, Sa'd said. 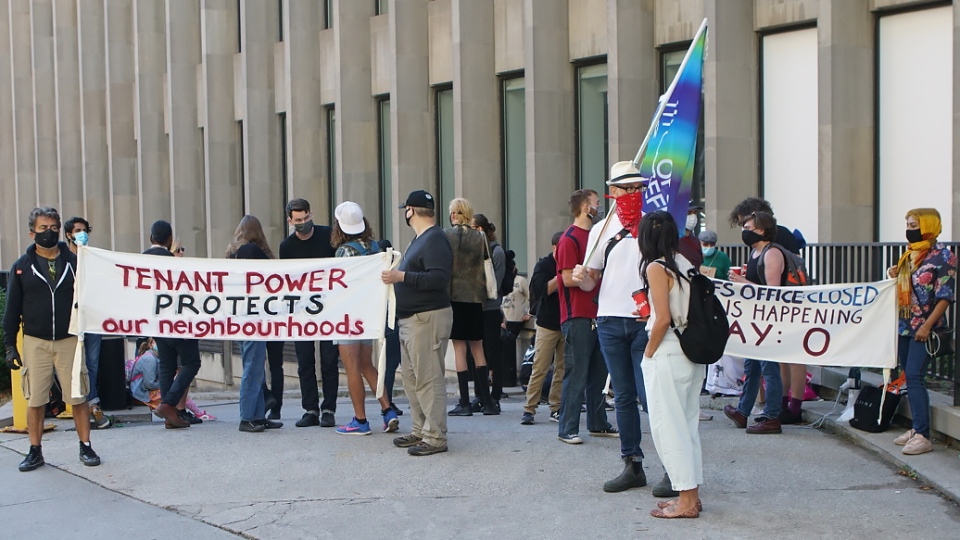 Protesters demonstrate against evictions outside Superior Court of Ontario in Toronto on Tuesday, Aug. 18, 2020. THE CANADIAN PRESS/Jake Kivanc

“It’s a big hot mess,” she said. “We're setting people up for failure with payment plans that someone can't actually commit to or promise because they don't have a crystal ball, any more than the landlord does.”

“There’s this policy landscape that is so hostile, and the people who are most vulnerable and most likely to be affected by this are … those who are in hot spots, who are essential workers [or] marginalized in other aspects of their life.”

Nithiananthan said he’s seen essential workers, for whom English isn’t their first or second language, end up in a tenant-landlord agreements they don’t fully understand. So when they’re late with rent, it can easily mean they end up staring down an officer looking to evict them.

Their sit-ins are last-ditch efforts to stop the eviction in the short term and renegotiate rent relief in the longer term. But lawyer Sa’d said relying on this is too unpredictable.

“There are times where there's enough community support and solidarity that you see direct action, such as like a sit-in or something along those lines and the success, I think it varies,” she said.

Throughout the pandemic, officials have often repeated the mantra of “we’re in this together” and how interconnected communities are.

But Sa’d, Gharibnavaz, Boozary and Nithiananthan all said there is a huge disconnect from public officials’ policies and their claims that they’re doing everything to protect citizens from COVID-19.

Boozary said lifting eviction bans, repeated pushbacks against paid sick days, and disproportionate access to vaccines have all led to a “tale of two pandemics” where vulnerable Canadians are hit harder than everyone else.

Sa’d, a landlord herself, called for regular access to rent subsidies or forgivable loans, and expanding the criteria for municipal rent banks, which provide interest-free loans.

Boozary, who said “we know how closely linked housing and health are,” went a step further and advocated for a housing-for-all option, especially during the pandemic when he said there are potentially tens of thousands of Canadians without homes.

If there’s a failure to do so, he said, “we will only see a degradation in public health going forward and a widening income inequality that is probably unfathomable at this time.”

Tightened restrictions on gatherings sizes now in effect across Manitoba

Experts worry AstraZeneca death will deter others from getting vaccinated

All bark and no bite? Still no enforcement of B.C. travel ban