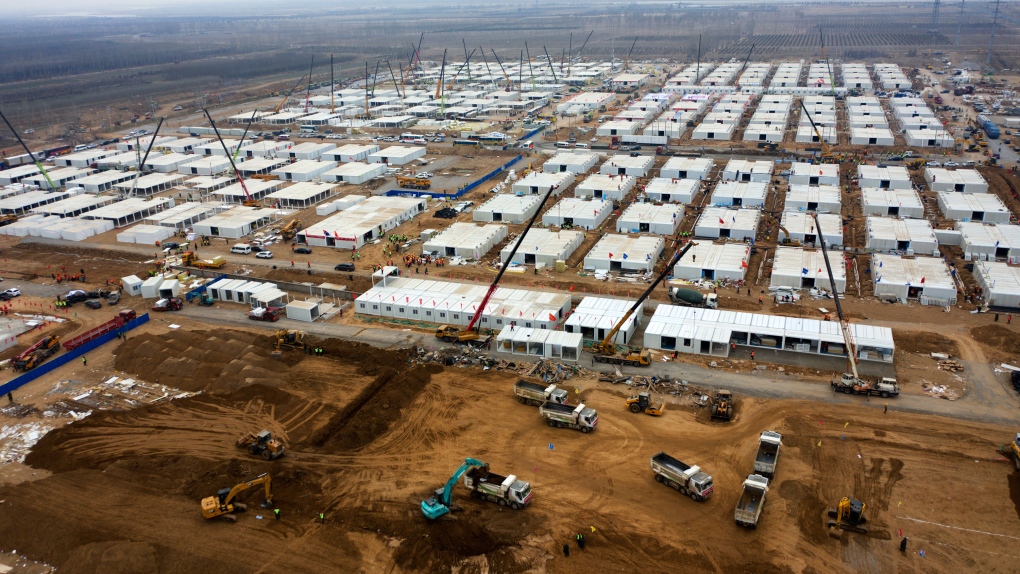 An aerial view of the construction site of the quarantine camp in Shijiazhuang, Hebei, China, on Jan. 19. (Ren Quanjun/VCG/Getty Images)

China is rushing to build a massive quarantine camp that can house more than 4,000 people, after an outbreak of COVID-19 this month that has left tens of millions of people under strict lockdown.

The quarantine camp is located on the outskirts of Shijiazhuang, the provincial capital of Hebei province, which surrounds the country's capital, Beijing.

China has largely contained the spread of the virus, with much of the country returning to normal. However, a sudden rise in cases has alarmed officials and raised concerns ahead of the Lunar New Year, the county's most important annual festival, during which hundreds of millions of people are expected to travel to visit family members.

Officials in Shijiazhuang, where the outbreak is centered, have initiated mass testing and strict lockdowns, moving entire villages into centralized quarantine facilities in a bid to curb the spread of the virus.

It was originally planned to house 3,000 people, but has since been expanded to a capacity of 4,160. More than 4,000 construction workers performed "six days' and nights' work" to complete the first phase, said Shijiazhuang Deputy Mayor Meng Xianghong on Tuesday.

Authorities began construction on Jan. 13 and the first section of the camp is now complete and ready for use, while construction continues on the second phase, according to state-owned broadcaster CCTV.

Each prefabricated room is expected to measure 18 square meters (around 194 square feet), and will come with an en-suite bathroom and shower, desks, chairs, beds, Wi-Fi, and a television set, according to CCTV.

The ambitious task is reminiscent of earlier efforts during the initial stages of the pandemic, during which authorities built several medical facilities from scratch, including a 1,000-bed hospital in just 10 days.

The total number of confirmed COVID-19 cases in mainland China now stands at 88,557, while the official death toll is 4,635.

In an effort to contain the outbreak, authorities placed Shijiazhuang under lockdown on Jan. 8, with all 11 million residents barred from leaving the city.

More than 20,000 citizens from 12 villages in Shijiangzhuang have since been relocated to other quarantine sites as a preventative measure, Chinese state media outlet CGTN reported last week.

To date, more than 17 million people have been tested in Hebei, with authorities currently undertaking a second round of mass testing in Shijiazhuang and the cities of Xingtai and Langfang.

Hebei authorities are now urging residents to stay at home, with officials sent to urban and rural areas to enforce measures and ensure people aren't traveling across the province and into Beijing.

In response to the perceived threat, Beijing authorities have stepped up testing and screening efforts after cases were confirmed in the capital's outermost Daxing district, and announced on Wednesday they would close two nearby metro stations until further notice.

In northeastern Jilin province, 102 cases have been linked to a so-called "superspreader," a salesman who traveled from his home province of Heilongjiang.