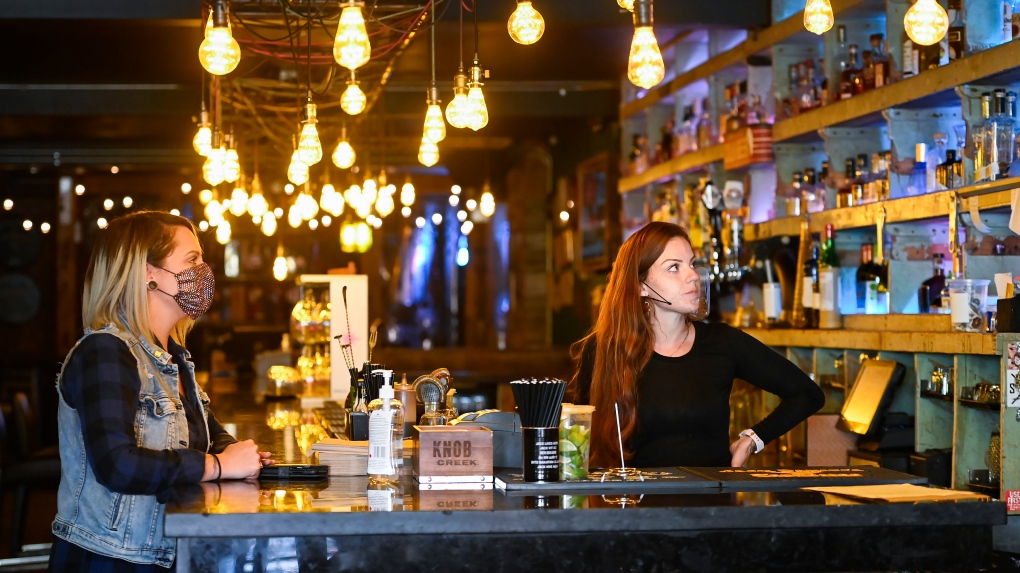 Bartender Victoria Colombe, right, and manager Amanda Godinho, left, watch the news on a television while working at Door Fifty Five bar and restaurant during the COVID-19 pandemic in the Port Credit neighbourhood of Mississauga, Ont., Friday, Oct. 9, 2020. THE CANADIAN PRESS/Nathan Denette

EDMONTON -- Having a conversation with someone in close quarters while infected with COVID-19 could be just as dangerous as coughing near them, new research published Wednesday suggests.

According to the study, completed by researchers at the University of Cambridge and Imperial College London, when two people are in a poorly ventilated space and neither is wearing a mask, a prolonged conversation is far more likely to spread respiratory droplets carrying the virus than a short cough.

Study authors developed mathematical models to show how SARS-CoV-2, the virus which causes COVID-19, spreads in different indoor spaces depending on the ventilation and the use of masks.

The results suggest it takes just a couple of seconds for exhaled particles to travel beyond two metres and may linger for up to an hour after an infected person spoke – even if only for 30 seconds.

COVID-19 is spread from an infected person to others through respiratory droplets and aerosols created when the individual coughs, sneezes, or talks.

The droplets vary in size from large, which fall to the ground within seconds or minutes, to small, sometimes called aerosols, which linger in the air depending on the ventilation of the space.

When speaking, we exhale smaller droplets which spread more easily around a room and accumulate without proper ventilation. Coughing, on the other hand, expels larger droplets, which are more likely to settle on surfaces surrounding the infected person.

Researchers built mathematical models to take into account the size of droplets emitted from infected individuals when they speak or cough, and included factors such as how droplets evaporate and settle on surfaces and the viral load they may contain.

The results suggest the risk of transmission is quite high when standing within two metres from an unmasked infected person who is talking.

An hour after an infected person has spoken – even if the conversation was kept to a short 30 seconds – the aerosols left behind contain much more viral mass than one cough; enough to cause a possible infection.

When masks are worn however, they filter a portion of the exhaled droplets during conversation, reducing the amount of virus in aerosols that can spread through a space.

“Our knowledge of airborne transmission of SARS-CoV-2 has evolved at an incredible pace, when you consider that it’s been just a year since the virus was identified,” study co-author Dr. Pedro de Oliveira said in a University of Cambridge press release.

“In our work, we consider the wide range of respiratory droplets humans exhale to demonstrate different scenarios of airborne viral transmission – the first being the quick spread of small infectious droplets over several metres in a matter of a few seconds, which can happen both indoors and outdoors. Then, we show how these small droplets can accumulate in indoor spaces in the long term, and how this can be mitigated with adequate ventilation.”

Researchers say the results of the study show the vital role of ventilation in preventing the spread of COVID-19, especially as more people gather indoors during the winter months.

The researchers have released a free, open-source tool that can be used by those managing public spaces, such as restaurants, retail shops, workplaces and classrooms, to evaluate their ventilation needs.

“The tool can help people use fluid mechanics to make better choices, and adapt their day-to-day activities and surroundings in order to suppress risk, both for themselves and for others,” said study co-author Savvas Gkantonas, who led the development of the app with Oliveira.

Researchers hope the platform will be useful for assessing the importance of mitigating measures, such as reducing exposure time, increasing ventilation, and wearing a mask.​