More than 100 years ago, a Canadian doctor tried to sound the alarm on residential schools but historians say he was silenced by government officials. Indigenous advocates working to reclaim his legacy now say a great deal can be learned from his example.

In the early part of the 20th century, medical health officer Dr. Peter H. Bryce repeatedly warned his superiors at the Department of Indian Affairs of the rampant spread of tuberculosis killing Indigenous children in residential schools.

He spent months examining dozens of schools in Manitoba, Saskatchewan and Alberta and found unsanitary conditions, poor health practices, buildings that were prone to fires, and a lack of ventilation. In a damning report to the government in 1907, initially hidden from the public by his bosses, he wrote “it’s almost as if the prime conditions of the outbreak of epidemics had been deliberately created.”

John Milloy, historian and Trent University professor, said it was one of the first attempts to flag the “dreadful health conditions” of the schools to the broader Canadian public.

“He made the mistake of illustrating that pretty effectively,” Milloy, author of “A National Crime,” told CTVNews.ca in a phone interview. His book title refers to the words Bryce himself used in a 1922 public exposé, after his pleas for reform were ignored for years.

Milloy characterized Bryce as a whistleblower when the department shunned his findings. Milloy said that Bryce was subsequently blocked from speaking at academic conferences; and that for the rest of his life, he was “hounded” and disparaged by his boss, deputy superintendent Duncan Campbell Scott, whose department ran the schools.

In 1907, Canada's Chief Medical Health officer, PH Bryce, raised the alarm about death rates of 25% of children in the schools per year due to inequitable health care, poor health practices and lack of ventilation. pic.twitter.com/xzktUexCEw

In the wake of the horrific discovery of the unmarked graves of 215 children at a residential school in Kamloops, B.C., Cindy Blackstock, executive director of the First Nations Child and Family Caring Society of Canada, tweeted about Bryce’s efforts decades ago.

“He fought to save these children’s lives,” Blackstock, a member of the Gitxsan First Nation, told CTVNews.ca in a phone interview. “Had he been listened to, I think it's fair to say thousands of children's lives could have been saved.”

“He was just an example of moral courage. He was willing to stand up for his professional values.. and for his moral values, no matter what the price for him personally,” Blackstock said. She has “great admiration for him” and, last year, even wrote an article for the Canadian Medical Association Journal about the need to reclaim his legacy and learn from it now.

But a pivotal moment in his career came in 1904, when the government asked him to be the chief medical health officer of the Department of Indian Affairs. According to statistics at the time, Indigenous people were dying from tuberculosis (TB) at a rate 20 times higher than that of non-Indigenous Canadians.

So Bryce was tasked with investigating the health conditions and deaths in residential schools and on reserves.

In 1907, Bryce released a critical report stating that, based on records he surveyed, up to a quarter of the 1,537 pupils across Canada’s residential schools were dead because of TB. In one example, he found 69 per cent of former students died after they left one school.

His reports and calls for reforms such as better ventilation systems, fixing structural problems in the buildings, improved diet, and having specialized nurses trained to treat TB, were largely ignored. 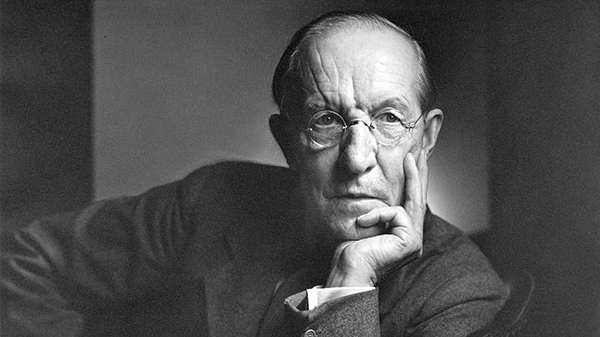 Photo of Department of Indian Affairs' deputy superintendent Duncan Campbell Scott. (Photo by Yousuf Karsh, courtesy of the Library and Archives of Canada)

Photo of Department of Indian Affairs' deputy superintendent Duncan Campbell Scott. (Photo by Yousuf Karsh, courtesy of the Library and Archives of Canada)

His boss Scott and others felt the reforms would have been too expensive, Milloy said. This would be the case with all Bryce’s subsequent reports.

Scott’s stance on the need for residential schools was well-known. He famously told a Canadian Senate hearing: “our object is to continue until there is not a single Indian in Canada that has not been absorbed into the body politic, and there is no Indian question, and no Indian department.”

Dr. Bryce spoke out to try to save the children's lives. It would have cost 15,000 out of a national budget of over 100 million. Canada said no. Dr. Bryce kept talking and was pushed out of the public service- he published this in 1922: pic.twitter.com/dc0d7UURrE

The department never published Bryce’s 1907 findings publicly but they were leaked to the press, Milloy explained. That year, newspapers ran editorials on them, with The Evening Citizen -- a precursor to The Ottawa Citizen -- even running a front-page story about Bryce’s findings.

“It was very annoying to the department to say the least, because it showed the public what a scandal it was,” Milloy said. “The death rate was, in many schools, larger than it had been for Canadian soldiers in the First World War.”

'HOUNDED' FOR THE REST OF HIS LIFE

Although the reaction to the report was mixed, with Catholic church officials responding defensively, Milloy said it sparked a personal vendetta by Bryce’s boss at the Department of Indian Affairs.

“He was hounded by Duncan Campbell Scott for the rest of his life -- for the rest of his career,” Milloy said. He said Scott stopped Bryce from speaking publicly, blocked his nomination to lead the then-new Department of Health, and eventually cut funding for his work, pushing him out of public service.

One of Bryce’s last attempts to make change came in 1922, when he published a short book entitled “The Story of a National Crime: An Appeal for Justice to the Indians of Canada.” It laid out just how much the government was at fault for the TB deaths and it included correspondence showing how Scott and the department had hamstrung Bryce’s decade-long efforts.

Bryce died 10 years later, with residential schools in Canada not closing until 1996. 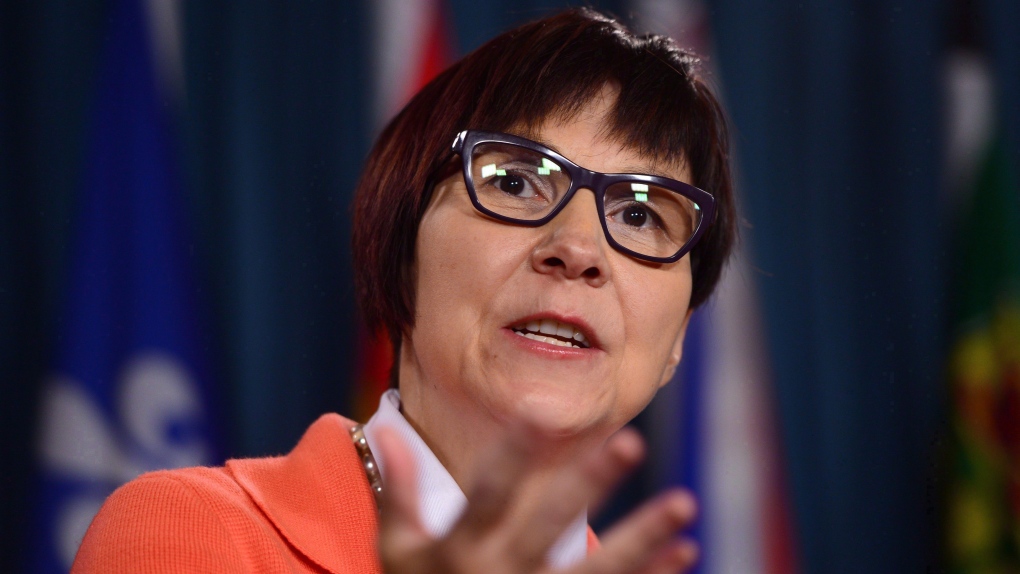 Bryce was buried in Beechwood Cemetery in Ottawa, the same place as Scott. Several years ago, Blackstock first became aware of the story of Bryce and Scott through Milloy’s book and that inspired her to begin to restore Bryce’s legacy.

Up until 2015, Scott had a glowing plaque referring to him as "one of the outstanding figures in Canadian poetry.” But Blackstock said it made no mention of how his inactions helped to prolong residential schools as an institution.

So, with the full support of cemetery staff and approval of the Bryce family, Blackstock worked with the former commissioner of the Truth and Reconciliation Commission Murray Sinclair, Milloy and others to replace the plaque with more balanced wording, including adding the phrases “cultural genocide" and "Confederate poet." 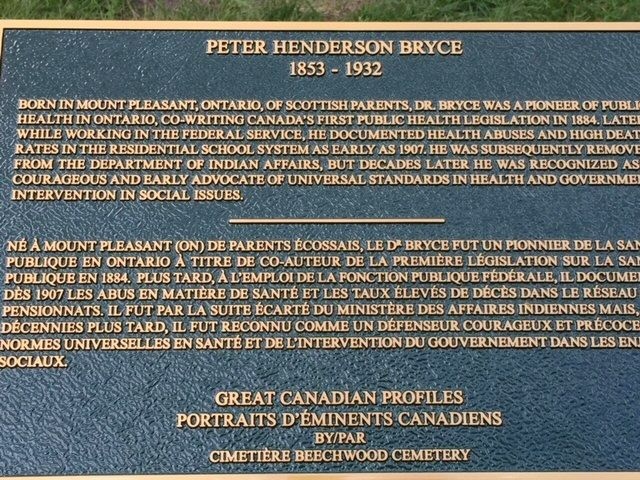 The plaque of Dr. Peter H. Bryce at the Beechwood Cemetery in Ottawa (Courtesy of Margaret Bryce)

She’s since become close with Bryce’s descendants, and that same year, Blackstock helped erect a historical plaque at the cemetery for Byrce that celebrates the work he tried to accomplish.

Blackstock has become something of a caretaker of Bryce’s grave and even built a small garden at the site. “I go there probably once a month at least. We always refresh the flowers and it’s been so wonderful to see so many people come to visit.”

Although some of the research that went into writing Bryce’s plaque is included in the B.C. elementary school curriculum, Blackstock wishes Bryce could’ve had a larger impact on changing and ending the practice of residential schools and the way Indigenous people are treated in Canada.

She believes much of the school’s legacy remains across many facets of society, including the disproportionate representation of Indigenous children in the foster-care system.

“Courage is not a value, it's an activator of value,” she said when thinking of Bryce. And when it comes to undoing all the unjust legacies of residential schools today, she urges people in government or in the health field to learn from Bryce’s stand.

The fatal film-set shooting of a cinematographer by actor Alec Baldwin last year was an accident, according to a determination made by New Mexico's Office of the Medical Investigator following the completion of an autopsy and a review of law enforcement reports.

Thousands of Afghans who helped Canada trapped in Afghanistan, struggling to leave

The federal government needs to do more to help thousands of Afghans who assisted Canadian Forces but remain trapped in Afghanistan a year after the Taliban seized Kabul, aid groups and opposition parties say.