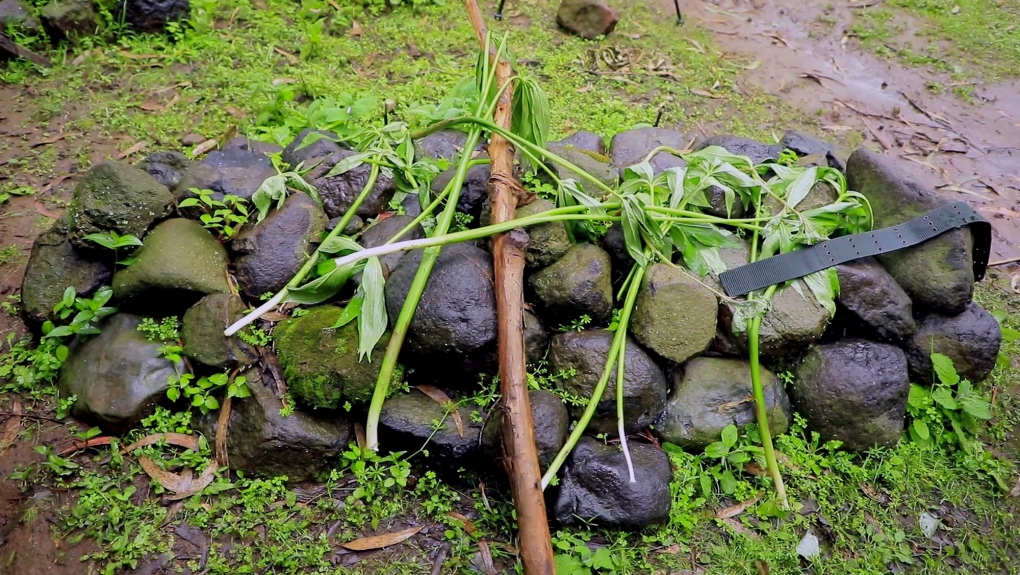 In this image made from video, rocks and branches cover the makeshift graves of killed civilians, according to residents, in the village of Chenna Teklehaymanot, in the Amhara region of northern Ethiopia Thursday, Sept. 9, 2021. (AP Photo)

NAIROBI, KENYA -- One man said he counted 55 corpses as he escaped from his town in northern Ethiopia, stepping over bodies scattered in the streets. Another asserted he was rounded up with about 20 men who were shot in front of him. Yet others claimed Tigray forces went door-to-door killing men and teenage boys.

The allegations from the town of Kobo are the latest against Tigray forces as they push through the neighbouring Amhara region, in what they call an attempt to pressure Ethiopia's government to end a 10-month war and lift a deadly blockade on their own home. Both Amhara and Tigrayan civilians have joined the fight, and calls by the United States and others for peace have had little effect as war spreads in one of Africa's most powerful countries.

The accounts from Kobo are the most extensive yet of one of the deadliest known killings of Amhara in the war. The estimates of deaths there range from the dozens to the hundreds; it is not clear how many were killed in all or how many were fighters as opposed to civilians, a line that is becoming increasingly blurred.

The Associated Press spoke with more than a dozen witnesses who were in Kobo during the killings, along with others who have family there. They said the fighting started on Sept. 9 as a battle but quickly turned against civilians. At first, Tigray forces who had taken over the area in July fought farmers armed with rifles. But after the Tigray forces briefly lost and regained control of the town, they went door-to-door killing in retaliation, the witnesses said.

"We did our best, whether we die or kill, but what is heartbreaking is the massacre of innocent civilians," said one wounded resident, Kassahun, who was armed. Like others who spoke to the AP after fleeing, he gave only his first name to protect family members still in town.

His account was echoed by a health worker who gave first aid to several wounded people. The health worker said Tigray forces withdrew from Kobo on the afternoon of Sept. 9 and returned several hours later, once local militia units had run out of ammunition and retreated.

"Then the killing started," he said, speaking on condition of anonymity for fear of retaliation.

The area of fighting is under a communications blackout, complicating efforts to verify accounts. Calls to the local administrator went unanswered. Ethiopia's state-appointed Human Rights Commission this week said it had received "disturbing reports" of alleged "deliberate attacks against civilians in Kobo town and surrounding rural towns by TPLF fighters."

The acronym stands for the Tigray People's Liberation Front, which dominated Ethiopia's repressive national government for 27 years but was sidelined by current Prime Minister Abiy Ahmed. What began as a political dispute erupted into war in November in the Tigray region, with thousands killed.

While atrocities have been reported on all sides, the worst massacres recounted by witnesses have been against the civilians of Tigray, along with gang-rapes and deliberate starvation. They were blamed on the Ethiopian government, Amhara militias and Eritrean soldiers.

However, since the Tigray forces in June retook much of their region and entered Amhara, accusations have been piling up against them, too. Amhara civilians in multiple communities have alleged that the Tigray fighters are killing them in retaliation, as the war grows bigger and more complex.

Most allegations cannot be verified immediately, given a lack of access. But in September, the AP reached the scene of an alleged massacre in Chenna Teklehaymanot, where at least dozens of Amhara were reported killed, both fighters and civilians. The AP saw bodies scattered on the muddy ground, some in the uniforms of fighters and others in civilian clothing, and residents alleged at least 59 people were buried in a nearby churchyard.

"They fought and our forces had to fight back," Getachew said. Asked about the calls for peace, he said "this cessation of hostilities thing needs to be taken seriously, but it takes two to tango," referring to Ethiopia's government.

As in Tigray, civilians are caught in the middle.

One resident, Mengesha, said he counted 55 corpses in the town. It was not clear whether they were of fighters or unarmed civilians. "I escaped by stepping over the dead bodies," he said. Like other witnesses, he fled to Dessie town 165 kilometers to the south.

Birhanu, a farmer, said he and his friend were walking home on Sept. 9 when they were rounded up with about 20 other men.

"They were shot in front of us," he said. "The fighters took us to their camp and made us line up and then picked who would be shot. I managed to run away with my friend."

He said the Tigray fighters fired at them as they fled, severing two fingers on his right hand.

Another resident, Molla, said he bandaged his wounds with grass and walked for days to safety.

"(The Tigray forces) were indiscriminately killing people, especially men," he said. "They dragged them out and killed them while their mothers were crying. They killed my uncle and his son-in-law on his doorstep."

A third resident, Ayene, said he watched out a window as fighters took his three brothers out of their nearby home and shot them on the street at point-blank range, along with four others.

"Then the fighters called me outside to shoot me, but luckily a woman intervened and I was saved," he said. "There were so many bodies, I lost my mind."

Before fleeing, Kobo residents said they spent days recovering bodies. One shop assistant, Tesfaye, said he locked himself inside his house, and then counted 50 bodies once the firing stopped.

"I saw many of my friends who were dead on the street," he said. "I was just crying, then I went to bury them."