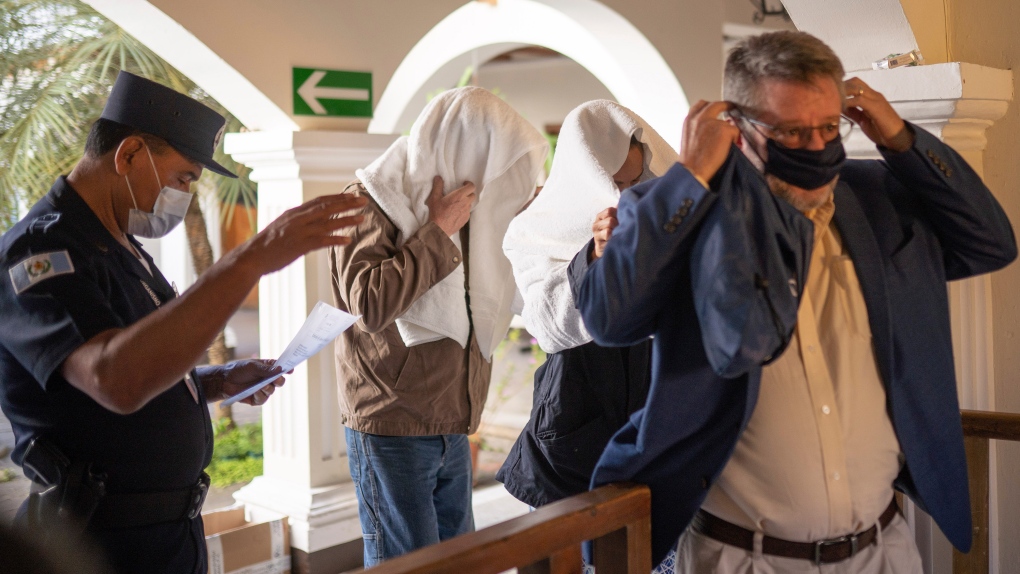 Led by their lawyer Juan Pablo Aris Bravo, right, Stephanie Allison Jolluck, and Giorgio Salvador Rossilli exit out of a courthouse with their faces covered with a towel, after they were released, in Antigua, Guatemala, Tuesday, Nov. 15, 2022. Stephanie Allison Jolluck was first captured on Nov. 9th at Guatemala City's airport when she was found to be transporting two archeological artifacts in her luggage, she was arrested and taken to a courthouse in Guatemala City and placed on probation, but then the couple was arrested on Sunday, Nov. 13, with over 150 archeological artifacts in a vehicle. (AP Photo/Santiago Billy)
GUATEMALA CITY -

Prosecutors in Guatemala said Thursday they have found more possible pre-Hispanic artifacts during a search of the home of an American couple facing charges of smuggling historical relics.

Prosecution spokesman Juan Luis Pantaleon said several pieces were found at the home that may be seized as evidence in the case. The couple lives in the tourist town of Antigua, just outside Guatemala City.

The case involves two Americans, one a photographer and the other a connoisseur of Mayan folk art. Photographer and designer Stephanie Allison Jolluck was detained a week after trying to fly out of Guatemala with two stone carvings were made between 600 and 900 A.D.

Jolluck says she bought them at a market, believing they were souvenirs.

Jolluck was released on her own recognizance after her arrest at the airport because she was a long-term resident of Guatemala. But Jolluck and her American companion, Giorgio Salvador Rossilli, were detained again Sunday when they were found with 166 Mayan artifacts in their vehicle.

"They argued that, because they are foreigners, they cannot tell one piece from another," de Leon said. "They told the judge that because they were pieces of stone they had seen sold at the markets, they never imagined that they were ancient archeological pieces."

Guatemala's Culture Ministry says that 90% of the 166 artifacts -- mostly stone carvings -- found in the couple's vehicle are authentic. People smuggling relics and archaeological artifacts face between 5 and 10 years in jail if convicted in Guatemala.

De Leon said Rossilli also argued the pieces weren't his, and that he had been given them by someone else to restore, and that he was returning them when he was detained.

On Monday, Judge Sherly Figueroa released both Jolluck and Rossilli on bail of about $6,400 apiece and allowed them to keep their passports but prohibited them from leaving the country. They will be required to show up at prosecutors' offices every two weeks as their case continues.

Jolluck's lawyer, Juan Carlos Velasquez, refused to discuss the case with journalists, saying ,"I don't litigate in the media."