Hundreds of migrants set off from Honduras toward U.S. border 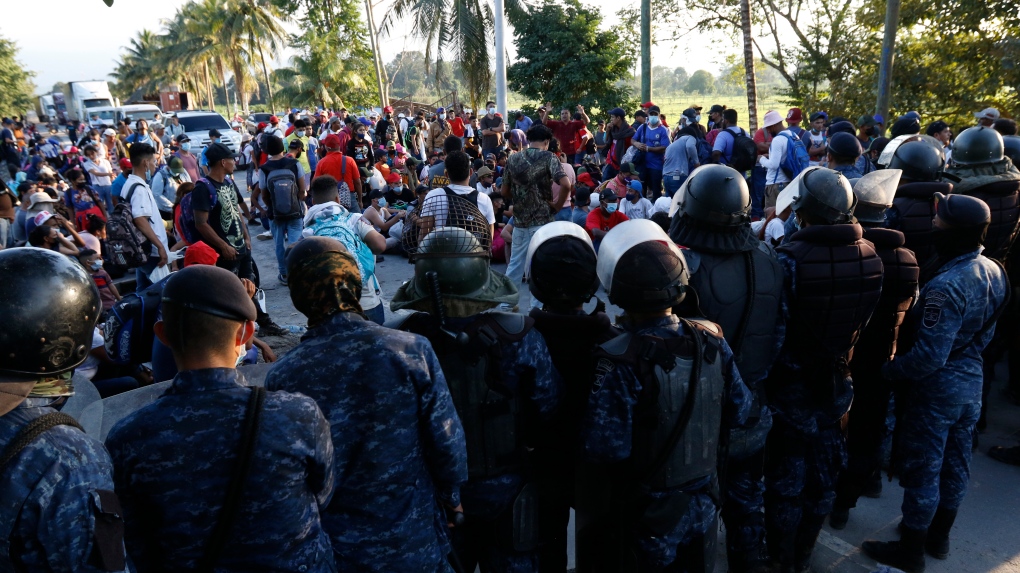 Guatemala's military stops migrants who are part of a caravan from Honduras hoping to reach the United States after they crossed the border in Puerto Barrios, Guatemala, Saturday, Jan. 15, 2022. (AP Photo/Delmer Martinez)
SAN PEDRO SULA, Honduras -

Some 600 migrants hoping to reach the United States set off in a caravan Saturday from the northern Honduran city of San Pedro Sula.

Hundreds of young men, women and children, most from Nicaragua, Honduras and Cuba, had gathered overnight and early morning at the city's central bus station.

Shortly after dawn, they set out walking toward the Guatemalan border in hopes that travelling in a group would be safer or cheaper than trying to hire smugglers or trying on their own. A smaller second group soon joined.

Fabricio Ordonez, a young Honduran laborer, said he had joined the group in hopes of "giving a new life to my family."

"The dream is to be in the United States to be able to do many things in Honduras," he said, adding he was pessimistic that left-leaning President-elect Xiomara Castro, who takes office on Jan. 27, would be able to quickly solve the Central American nation's economic and social problems after 12 years of conservative administrations plagued by scandal.

"They have looted everything," he said. "It is going to be very hard for this government to improve things."

Nicaraguan marcher Ubaldo Lopez expressed hope that local officials would not try to hinder this group, as they have in the past.

"We know this is a very hard road and we ask God and the Honduran government to please accompany us to the border with Guatemala and not put more roadblocks," he said.

He said he hoped that Guatemala and Mexico also would allow the group to pass and that the U.S. government "will open the doors to us" -- despite repeated recent examples of regional governments, often under U.S. pressure, trying to halt such caravans.

Large numbers of migrants, many from Central America and Haiti, have reached the U.S. border over the past year, creating a headache for the administration of President Joe Biden.

After several hours of travel Saturday, some migrants managed to cross into Guatemala through illegal border crossings, while several hundred were stuck on the Honduran side of the border because they did not have money to pay the roughly $50 for a PCR test for coronavirus demanded by authorities.

The general director of the Guatemalan Institute of Migration, Carlos Emilio Morales, said "people are being returned, everything is in order, humanely." He did not provide further details.

In December, 56 migrants died when a truck carrying more than a hundred foreigners overturned on a highway in southern Mexico.

The U.S. Border Patrol has said it had more than 1.6 million encounters with migrants along the Mexican border between September 2020 and the same month in 2021 -- more than four times the total of the previous fiscal year.

Biden has backed proposals for $7 billion in aid to Guatemala, El Salvador and Honduras in hopes improved economic conditions will slow migration.

At the end of last year, the U.S. government reactivated an immigration policy that forced asylum seekers to wait in Mexico for their hearings. Mexico's foreign ministry confirmed the reactivation of the U.S. program and said it would temporarily not return migrants to their countries of origin for humanitarian reasons.

The government of Mexican President Andres Manuel Lopez Obrador has indicated that Washington has accepted its humanitarian concerns with the program, including the need for "greater resources for shelters and international organizations, protection for vulnerable groups, consideration of local security conditions" as well as vaccines and anti-COVID-19 measures from migrants.

A driver who struck and killed a woman and her three young daughters in Brampton, Ont., nearly two years ago is being sentenced to 17 years behind bars.

The isolated state is one of only two countries yet to begin a vaccination campaign and, until last week, had insisted it was COVID-19-free.