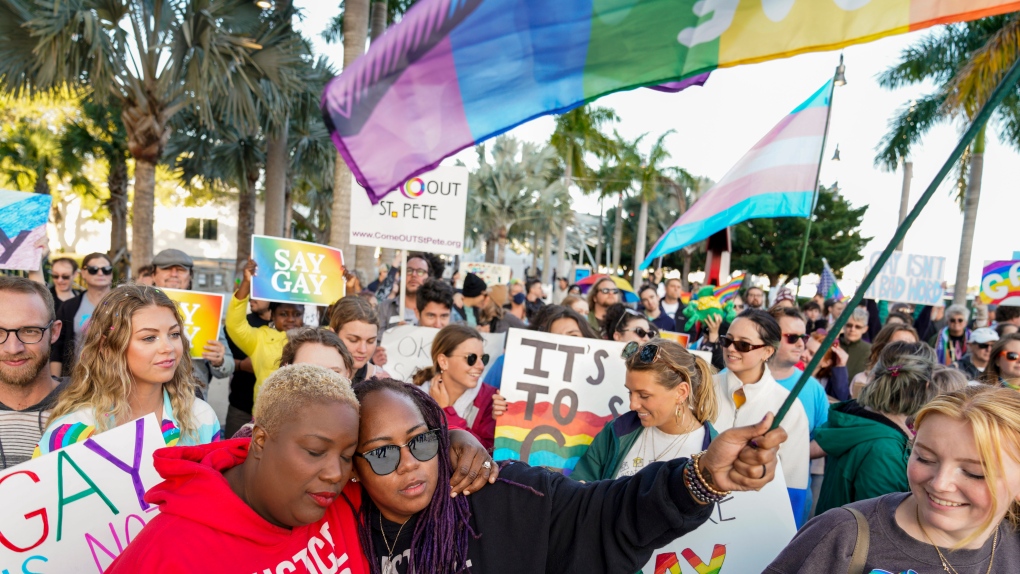 Research that analyzed social media posts finds that hateful references to gays, lesbians and other LGBTQ2S+ people surged online after Florida passed a law that bars instruction on sexual orientation and gender identity in kindergarten through third grade.

References to pedophiles and “ grooming ” rose by more than 400 percent in the month after Florida's “Don't Say Gay” measure was approved, according to a report released Wednesday by the Human Rights Campaign, one of the nation's largest LGBTQ2S+ advocacy groups, and the Center for Countering Digital Hate, a nonprofit group that tracks online extremism.

The measure, passed by the Florida Legislature on March 8 and signed by Republican Gov. Ron DeSantis on March 28, says school teachers cannot discuss gender identity or sexual orientation with their young students. Supporters have said decisions about talking about sexual orientation should be left to parents, not teachers.

Critics have said the law sends a hateful message about LGBTQ2S+ people.

The researchers who compiled the report found that the 500 most-viewed tweets that mentioned “grooming” were viewed more than 72 million times between January and July.

Influential conservatives drove much of the increase, the researchers found, through their own posts or by liking or forwarding posts from others. They include U.S. Reps. Lauren Boebert, R-Colo., and Marjorie Taylor Greene, R-Ga., and DeSantis' press secretary, Christina Pushaw, who has equated criticism of the bill with pedophilia itself.

“If you're against the Anti-Grooming Bill, you are probably a groomer or at least you don't denounce the grooming,” Pushaw tweeted in March.

Pushaw later defended her comments, saying she did not single out LGBTQ2S+ people in her comments or intend to attack them. She said criticism of Florida's law is misleading and political.

The authors of the report warn that the increased anti-LGBTQ2S+ rhetoric is inciting hatred that could lead to violence. They say social media platforms must do more to enforce their own policies on hate speech. Researchers said they reported 100 of the most hateful tweets they saw to Twitter. Only one was removed.

Messages left with Twitter, Boebert and Greene were not immediately returned.