Enlargement back on EU's agenda at Western Balkans summit

Enlargement back on EU's agenda at Western Balkans summit 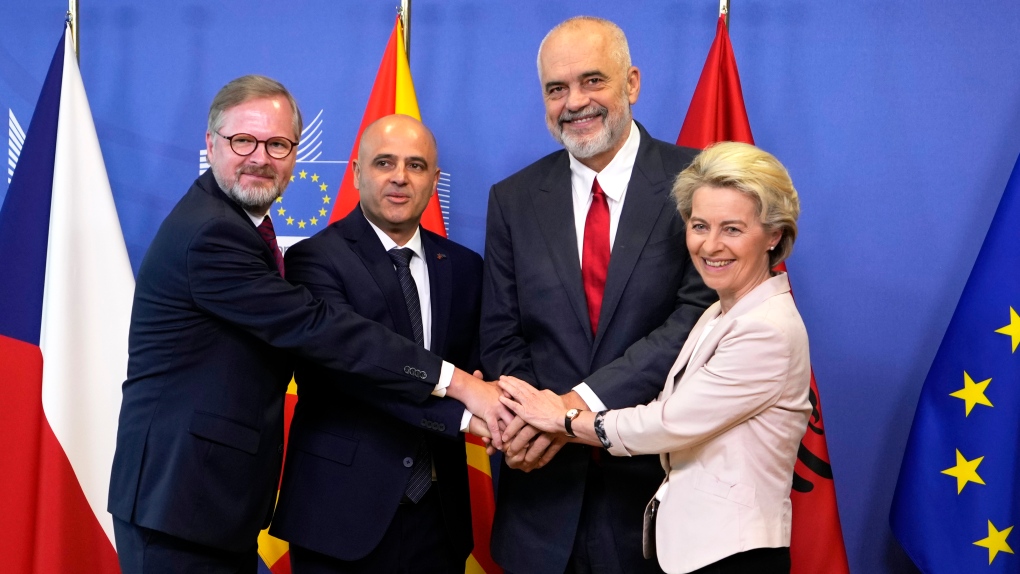 The war in Ukraine has put the European Union's expansion at the top of the agenda as officials from the Western Balkans and EU leaders gather Tuesday for a summit intended to reinvigorate the whole enlargement process.

The EU's executive commission has repeatedly promised Albania, Bosnia, Kosovo, Montenegro, North Macedonia and Serbia that they have futures within the bloc. But the progress of the six nations toward getting there stalled in recent years.

As the war in nearby Ukraine rages, Albanian Prime Minister and summit host Edi Rama called for the EU to turns its words into action.

The EU last admitted a new member -- Croatia, which is also part of the Balkans -- in 2013. Before that, Bulgaria and Romania joined in 2007. With the withdrawal of the United Kingdom in 2021, the EU now has 27 member nations.

Although divisions among them on the pace of accession talks and some complicated bilateral issues remain, EU officials think it's more crucial than ever to make clear the six Western Balkans nations belong in the European family so they don't turn in frustration toward Russia or China instead.

"Enlargement policy is among the top three priorities of EU leaders," EU Commissioner for Neighborhood and Enlargement Oliver Varhelyi said during a visit to Belgrade, Serbia's capital, last week. "The only real long-term solution for peace, stability and prosperity is EU membership."

EU leaders agreed in June to make Moldova and Ukraine candidates for membership and said Georgia would be eligible for candidacy once the country met some goals defined by the European Commission.

A month later, the EU started membership negotiations with Albania and North Macedonia following years of delays. Bosnia moved a small step closer on its path to join the powerful economic bloc when the commission advised member countries in October to grant it candidate status despite continuing criticism of the way the nation is run.

Kosovo has only started the first step, with the signing of a Stabilization and Association Agreement. It said it would apply for candidate status later this month.

NATO Secretary-General Jens Stoltenberg insisted last week that supporting Moldova, Georgia and Bosnia was crucial in the context of the war. Stoltenberg noted that Bosnia, where Russian interference and ethnic tensions long have created political instability, is "important for stability in the whole of the Western Balkans."

But the problem for the countries-in-waiting is that the EU has not deemed their economies and political institutions ready for integration into the EU's single market of open trade and Western democratic ideals.

"None is close to joining the EU," said Luigi Scazzieri, a researcher at the Centre for European Reform, a think tank based in London. "They must all overcome substantial hurdles to meet the Copenhagen criteria, which define the EU's standards on strong democratic institutions, a functioning market economy and the ability to take on the obligations of membership."

"We have created an energy support package that should all together mobilize at least 2.5 billion euros for the region," Varhelyi said.

A bitter dispute between Serbia and Kosovo, a former Serbian province that declared independence in 2008, remains a great concern for the Western powers ahead of the summit. Serbian President Aleksandar Vucic had threatened to boycott the gathering to protest a recent political appointment by Prime Minister Albin Kurti of Kosovo.

Vucic changed his mind Monday, saying he and his associates agreed it would be better if he attended to argue for Serbia's interests. He said he expected to face "pressure" to recognize Kosovo and to impose sanctions against Russia but that he would explain Serbia's positions during several meetings with EU leaders in Tirana.

While visiting Belgrade, Varhelyi made clear to Vucic that Serbia needed to align its foreign policies with those of EU if the country hoped to join the bloc at some point. Vucic claims he wants to take Serbia into the European Union but has cultivated ties with Russia.

Although Serbia's representatives voted in favor of different U.N. resolutions condemning Russia's invasion of Ukraine, Vucic has refused to explicitly condemn Moscow. His country has not joined Western sanctions against Russia over the war.

"Further progress on the rule of law is essential, but it is not going to be enough," Varhelyi said. "Alignment with the EU foreign policy also plays a much stronger role than before. Because Europe is also under attack."

He said the leaders meeting in Tirana also plan to discuss a recent increase in migrants and asylum-seekers moving without entry permits through the Western Balkans, most hoping to reach the EU eventually.

After the EU admitted Croatia in 2013, the enlargement process slowed as eurskeptic voices grew in founding member nations such as Germany, France, Italy and the Netherlands. The eurozone debt crisis 10 years ago, mass migration into Europe in 2015, and the U.K.'s 2016 Brexit referendum also contributed to political unease with expanding the bloc further.

A senior aide to Japan's prime minister is being dismissed after making discriminatory remarks about LGBTQ2S+ people.