One of the outcomes of the 2018 Humboldt Broncos tragedy is the reform of transport truck driver training in Canada, which has seen mandatory entry-level training (MELT) become a requirement to getting a licence in parts of the country.

More than three years after the tragedy, eight out of 13 provinces and territories have yet to make training mandatory for licensing truck drivers, despite it being codified as a national standard in 2020 by the Canadian Council of Motor Transport Administrators, an organization that brings together all the federal, provincial and territorial transport departments.

W5 surveyed the truck driving school landscape across Canada to produce this snapshot of the state of MELT in the country.

In British Columbia, the Crown Insurance Corporation of British Columbia (ICBC) is responsible for driver licensing and vehicle registration. ICBC also maintains the registry of schools approved for MELT. There were 43 MELT schools in B.C. at the end of September, but ICBC told W5 that it expects that number will grow as it receives and processes new applications before Oct. 18, 2021: MELT's official start date in B.C. Until then, all existing B.C. Class 1 drivers are exempt.

In Alberta, two truck driving schools had their licences suspended or cancelled in the last three years, but their names are kept private by the province. The Ministry of Transportation confirmed via email that the driver training school and the driving instructor who provided training to Jaskirat Sidhu, the driver of the transport truck in the Humboldt Bronco's bus crash, are no longer licensed in Alberta.

In Saskatchewan, MELT came into effect in 2019. Like the Crown insurers in B.C. and Manitoba, Saskatchewan Government Insurance (SGI) operates the province’s driver licensing system and certifies truck driver training schools. SGI introduced a new audit program to monitor the training schools for compliance to new and higher standards. In 2021, Saskatchewan became first jurisdiction to offer online training for Class 1 drivers with the practical portion then being at one of 24 recognized schools. SGI’s plans are to inspect 12 of those schools every year; it has three people performing commercial driver training audits, assessments and site visits in Saskatchewan.

Manitoba Public Insurance maintains the registry of MELT providers. MELT became a prerequisite for truck driver licensing in the province on September 1, 2019. Drivers with licences issued before that date were not required to retest or take MELT. In Manitoba, would-be truck drivers can also complete an existing 244-hour course offered by a private vocational institute, which is more than a hundred hours longer than the 121.5-hour minimum MELT requirement in Manitoba. There were 27 MELT trucking schools in late September and one vocational institute.

With its 183 public and private truck-driving schools, Ontario accounts for nearly half of all 370 schools across Canada, when W5 counted them in late September.

Those 155 PCCs offer 450 approved truck driver courses across 198 campuses in Ontario, a province where MELT was already being adopted when the Humboldt tragedy occurred in 2018.

In 2021, there are 520 registered PCCs operating 719 campuses, offering a range of vocational training from hairstyling to cooking to paralegal training and truck driving. The 155 private trucking schools account for 30 per cent of all PCCs in Ontario.

The MCU's compliance and enforcement reports for all 520 schools show 29 notices and orders going back to 2018, including 11 for nine truck driving PCCs: eight compliance orders, two financial penalties and one immediate registration revocation .

The province has eight inspectors looking after 155 truck-driving PCCs. 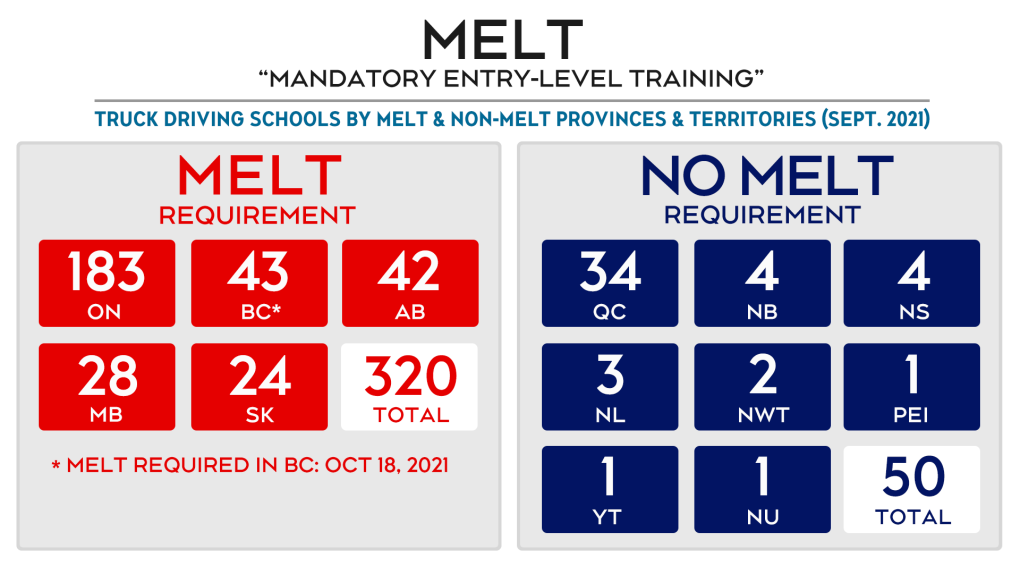 "Quebec has a substantial program, largely funded by the government, that provides much more training than MELT," Mike Millian, president, Private Motor Truck Council of Canada, told W5. The standard cost for taking the 615-hour truck driver training course in Quebec is $132 in the "transport par camion" schools and programs reviewed by W5.

But in Quebec, MELT-like norms were incorporated into licensing eligibility requirements as options, not a mandatory requirement. While not compulsory to get your truck driver's licence in Quebec, truck driver training will cut down your qualification time for that license by a full year. Quebec publicly-funded professional colleges have been providing a standard 615-hour truck driving program for years, with smaller private schools expected to meet the demand for the MELT-minimum course.

The provincial Crown insurance corporation, the Société de l'assurance automobile du Québec (SAAQ) administers driver’s licences. Training was still optional, not required, in late September. In Quebec, you can take the Class 1 road test with three years' driving experience, a good driving record, and pass one knowledge and two road tests. Indeed "the number of mandatory hours for a driving formation is not fixed by the law" the Association du Camionnage du Québec confirmed to W5.

In Nova Scotia, you can upgrade from your Class 5 to a Class 1 licence after a year of experience behind the wheel of a car. You need to be 19, pass written, medical and optical tests with "successful demonstration of driving ability in a semi-trailer or a tractor trailer combination."

There was no training requirement in Nova Scotia to get your Class 1 transport truck driving licence in late September 2021. But that may change sometime in the unspecified future, as Nova Scotia is in the process of adopting the national entry-level training standards, according to the Nova Scotia Department of Public Works.

In Nova Scotia, there are four registered institutions offering commercial truck driver training (Class 1), two in Sydney and one in Masstown and Dartmouth.

There are currently no training requirements to get your Class 1 licence in New Brunswick. The written test requires being at least 18, a year of holding another driver’s licence and a medical fitness report. To take the Class 1 road test, you are additionally required to bring "a road worthy vehicle" to your road test.

But that may soon change. "New Brunswick is currently reviewing the federal standard and will bring recommendations forward for [the] government’s consideration in the New Year," a government spokesperson explained in an email to W5.

There are four truck driving schools in New Brunswick: three private and one public (and bilingual) offering training programs ranging from 112 to 465 hours.

P.E.I. is in the process of adopting the standard. There is one driving school on the island that offers a six-week-long Class 1 course, exceeding the minimum MELT standard.

Licensing in the province is the responsibility of Motor Registration and there are no training requirements in their list of must haves for a truck driving licence: one year Class 5 licence, medical, passed written commercial and sign and vision tests, plus air brake endorsement. Only then will you get a permit allowing you to be instructed by another licensed commercial driver. Otherwise, you're free to take the road test in Newfoundland and Labrador without mandatory training.

MELT is still a moving part in Newfoundland and Labrador, where the requirements and timelines are yet to be identified, according to the Department of Digital Government and Service NL.

In that province, there are three institutions – one public college and two private – registered to provide 13-week long truck driver training programs.

MELT is still a work in progress in Nunavut where they are taking the legislative steps to make it mandatory. But all the truck drivers who got their licences in recent years "have taken professionally delivered entry-level training," John Hawkins of Nunavut Economic Development and Transportation wrote to W5. Nunavut issues very few truck driver licences, approximately 15 every year, he explained.

"There are no inter-community highways in Nunavut, and no road connections to other jurisdictions. Consequently, there is no long-haul trucking, and large trucks on public roads are generally used only for local delivery of goods too large to deliver by other means," he explained.

While it supports a mandatory minimum training requirement for commercial truck drivers, formal training is recommended, not required, by the Government of the Northwest Territories.

That's expected to change as soon as December when a new regulation and curriculum are adopted. "Entry-level training is planned to become a requirement for Class 1 licence applicants effective late January 2022, and an approved entry-level training course will be available and provided by Aurora College" a government spokesperson explained in an email to W5.

There is no training requirement to take a truck driving test in Yukon. The Government of Yukon is in the process of rewriting the Yukon's Motor Vehicles Act from 1977, and MELT is being considered as part of that update. MELT is coming into effect in British Columbia on October 18 so "all drivers transiting through British Columbia to or from the Yukon will be required to have that training," a government spokesperson explained in an email.

"At this time, we do not have a training requirement in order for clients to take the practical test. However, we strongly encourage applicants to take preparatory training through a driving school to improve their chances for a successful test. There is only one driving school in Yukon that offers truck driver training" based in Whitehorse.

A previous version of this article incorrectly stated that MELT came into effect in Saskatchewan in 2021.